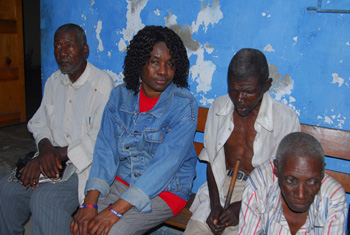 PORT-AU-PRINCE — A young priest who was pinned under the wreckage of his church for 19 hours. An old blind man in a shelter for homeless people in Petit-Goâve. A little girl in a tent city. The director of an orphanage on the dusty edge of Port-au-Prince.

These Haitians and many more came into contact with Lola Poisson during her brief but emotional trip to her earthquake-ravaged homeland early last month. All shared their stories of grief and horror, yet few were aware that Lola — who was born in Haiti but grew up in New York — is married to Raymond Joseph, Haiti’s ambassador to the United States.

That’s because Lola likes to keep a low profile.

“My position as the ambassador’s wife does not make any difference,” she explained. “True, it gives me exposure to people who are capable of helping, but that’s it. The rest I have to take care of myself.”

And that’s exactly what Lola’s been doing, both amid the destruction in Haiti and back here from Washington.

In her two-day visit to Haiti, Lola — accompanied nearly every step of the way by The Washington Diplomat — covered lots of ground, literally and historically. She met with VIPs like Archbishop Bernardito Auza, the Vatican’s top diplomat in Haiti, and NGO officials like Bob Fagen, Petit-Goâve representative for Maryland-based CHF International.

She also gained a reputation for taking chances — whether that meant walking through the rock-strewn rubble of a cathedral in Petit-Goâve or wandering through crowds at the makeshift tent city of Place Boyer in downtown Port-au-Prince.

“The woman is fearless,” said Brad Horwitz, chief executive officer of Trilogy International Partners, which owns Haitian mobile phone operator Voilá. “My security detail is still recovering from this woman who would not listen. They were literally chasing her throughout Petit-Goâve.” 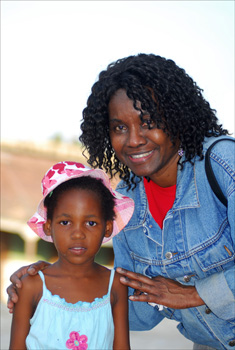 At one point, Lola even broke up a disturbance among teenage boys fighting over a stolen cell phone, calming the rowdy group of homeless kids with her soothing Creole voice and the grace of a seasoned diplomat.

“Just a few hours here is not enough for me,” Lola told The Diplomat as she surveyed the damage all around her. “What I was seeing on TV all the time made me feel it would be easy to change things. But what I’m seeing now is overwhelming. You know how I feel? Like my umbilical cord is here, and it’s as if I’m part of it.”

“Everything is needed in Haiti. It’s overwhelming, and to think you’re going to do it all at once is a big mistake,” she said. “So I have chosen to work in a smaller town. But I don’t have the resources to do it myself.”

So she’s joined forces with a number of high-powered supporters back in the nation’s capital. Both Auza the archbishop and Horwitz the investor reunited with Lola on March 11 at the Washington Hebrew Congregation, which hosted “A Tribute to the Resilience of Haitian Women.” The event, organized by Lola’s charity, Children and Families Global Development Fund Inc., featured musical performances, a speech by actor Sean Penn and Lola’s own home-cooked Haitian delicacies — as well as words of praise by the mistress of ceremonies, WJLA-TV anchorwoman Maureen Bunyan, and by the spiritual leader of the synagogue hosting the dinner, Rabbi Bruce Lustig.

“You have taught the people of the world the importance of using your resources in a way that creates a sense of love, dignity and helping others,” said the rabbi. “You honor women this evening, and you’ve inspired this congregation as well.”

In addition to Raymond Joseph, several other ambassadors were in the audience, including Nathaniel Barnes of Liberia, Anthony Johnson of Jamaica and La Celia Prince of St. Vincent and the Grenadines.

Planned long before the Jan. 12 earthquake, the four-hour extravaganza attracted 325 people and raised more than ,000 for relief efforts in Petit-Goâve, a city located 42 miles west of Port-au-Prince that was badly damaged in the disaster. 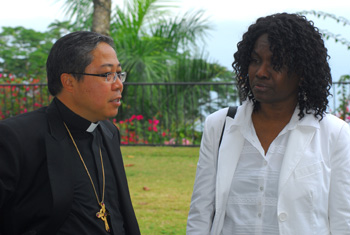 Since coming back to Washington in fact, Lola has been working all of her connections to raise much-needed funds by recruiting high-profile supporters. In addition to the March 11 dinner, she also recently teamed up with actors Danny Glover and Jimmy Jean Louis of the television show “Heroes,” a Haitian native who has his own relief foundation, Hollywood for Haiti. The March 21 event at the W Hotel raised money for both Louis’s foundation and Lola’s charity.

The need can’t be overstated in Petit-Goâve, which hasn’t received as much media attention as the devastated capital city of Port-au-Prince. The town had already been rocked by a series of hurricanes and floods in 2008, which is why Lola formed her foundation in the first place. The magnitude-7.0 earthquake wrought utter destruction on Petit-Goâve and ripped apart its most famous landmark, the 300-year-old Catholic Church. And if that wasn’t enough, eight days later an aftershock registering 5.9 shook the earth — its epicenter located almost directly under Petit-Goâve.

It took Lola and her entourage, traveling in a minivan from Port-au-Prince’s Toussaint Louverture International Airport, four hours to reach Petit-Goâve. In addition to this reporter, she was accompanied by Riva Levinson, a longtime friend and Washington business consultant whose client, Trilogy Partners, is the largest U.S. investor in Haiti.

Also on the trip was Naomi Abelson of the Union for Reform Judaism, which has raised class=”import-text”>2010April.PORT-AU-PRINCE.txt.2 million for Haitian earthquake relief efforts and is likely to channel at least some of that money to Petit-Goâve.

At the entrance to Lola’s adopted town were Brazilian and Spanish peacekeeping troops wearing the blue helmets of the United Nations. Petit-Goâve resembled a war zone, though the only battle being fought here now is the one against disease and hopelessness.

When the quake struck, 73 homeless people were living in the shelter that Lola’s charity funds, though it was providing meals for 150 people. 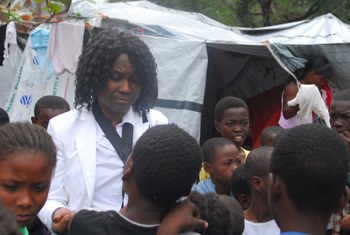 “Many of our people are now sleeping in tents outside,” said Father Luc Philogene, who spent 19 hours trapped under the rubble of his nearby church before being rescued. “The shelter suffered severe cracks and cannot be repaired. It will have to be knocked down and completely rebuilt.”

Philogene, wearing a black shirt with a heavy cross around his neck, celebrates Mass these days in the yard where his church, the Presbytere de la Iglese Catolica de Petit-Goâve, used to be. He told Lola that 50 nuns and brothers, six priests, one bishop and 33 seminarians died in the quake. They were among 1,000 local victims of a national tragedy that claimed an estimated 230,000 lives and ranks as one of the worst natural disasters in modern times.

CHF International’s Fagen, who’s been in Petit-Goâve for the last two years, said his nonprofit organization is employing 1,200 Haitians a day in “cash-for-work” programs aimed at clearing the rubble and injecting money into the local economy.

“Our biggest challenge was originally water, but now people are getting enough to drink. Reconstructing drainage and making sure people can move back into their houses will be the main priority,” said Fagen. CHF operates in Haiti on a 4 million grant from the U.S. Agency for International Development, though since the earthquake, it’s received additional funding from both USAID and the United Nations.

At a sprawling tent city in Petionville, a suburb of Port-au-Prince, Lola stopped to talk with frustrated residents made homeless by the earthquake.

“For the last two months, I’ve been here and haven’t seen any help — no president, no mayor, nobody,” complained Kenol Cassamajor, a 45-year-old carpenter from the Port-au-Prince district of Delmas who’s living under a blue tarp with his wife and four children. “Every day they bring water, but it’s not drinkable.”

Cassamajor lamented that his children have nothing to do all day, and that when it rains at night, his family has to stand up because it’s impossible to sleep on the wet ground. “The city government said they’ll take us to Croix-des-Bouquet or Morne Cabrits. That’s what they want, but it’s not our place. We don’t want to go.” 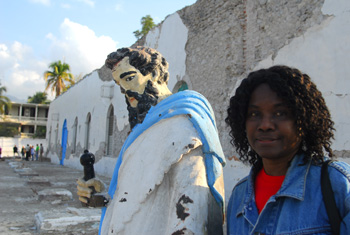 Jean-Yves Constant, a pastor, invited Lola into his tiny tent to show her what living conditions are like post-earthquake. He pulled from a ragged leather portfolio a certificate issued in 1995 by the Ministry of Health attesting to his skills in first aid and emergency disaster preparedness. But the government never calls him for a job, he said, because it prefers foreigners.

Before letting Lola move on, Constant scrawled the phone number of his aging mother in Brooklyn on a torn piece of paper and asked her to reassure the elderly woman that everything was alright.

In the Port-au-Prince neighborhood of Delmas, Lola paid a visit to John Dieubon, director of Project Papillon, an orphanage for 28 children that’s been operating since 2003.

“I don’t normally live here, but I moved here after the earthquake to be with the kids,” he explained as he showed his visitors around. The Papillon orphanage — which already gets funding from a Presbyterian church and a Reform Jewish synagogue in Hollywood, Fla., consists of four separate houses, three of which cost 0 a month to run. The fourth house is home to seven HIV-positive children, and that costs class=”import-text”>2010April.PORT-AU-PRINCE.txt,500 a month to operate.

“Most of the expensive medicines are paid for, and we pay for what they don’t cover,” he said, noting that he doesn’t want to put the children up for adoption. Rather, he said, “Our main goal is to have these kids go to school, study abroad, then come back and help change Haiti.”

Back in Washington, Lola was clearly moved by everything she saw. She now has a mission and is more determined than ever to see it succeed.

“Haitians, more than any other people, refer to their country as their mother, and this mother of mine is very sick. My brothers and sisters are dying. I don’t have Mr. Penn’s money, I don’t have Angelina Jolie’s money, and I don’t have Wyclef Jean’s money. That’s why you’re all here,” Lola told her admiring crowd at the March 11 fundraiser.

“Thanks to all of you, friends of Haiti — the mother of all liberated slaves — who made it possible for me to go on with this event. When men get out of the way, woman does what she has to do,” she said to laughter. “And I want to thank my dear husband, Ambassador Joseph, for always getting out of the way.”