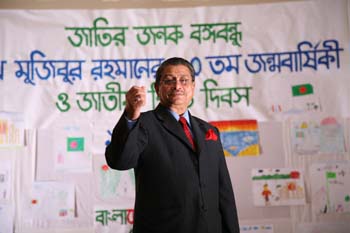 Bangladesh, with nearly 155 million people jammed into an area smaller than Wisconsin, has seen more than its share of disasters. Floods, droughts, tornadoes and cyclones have plagued this sad little country ever since its creation 39 years ago, killing millions of people and leaving many more homeless.

If the experts are right, it’s about to get much worse.

A likely 1.5-degree Celsius rise in average global temperature by 2050 could melt glaciers as nearby as the Himalayas and as far away as the polar ice caps — causing sea levels to rise by one meter and submerging one-third of Bangladesh. That would create 20 million environmental refugees and cause 40 million more to lose their livelihoods.

With nowhere to go, vast numbers of desperate Bangladeshis could cross into India, ending up in squatters’ camps or crowding the already fetid slums of Delhi, Mumbai and Calcutta.

“This is a very serious issue,” said Akramul Qader, Dhaka’s ambassador in Washington, setting the tone for our hour-long interview late last month. “Everyone agrees that Bangladesh will suffer more from climate change than any country in the world.”

Qader said global warming — along with overpopulation, efforts to expand apparel exports to the United States and the rising threat of Islamic extremism — have taken up much of his time since presenting his credentials to President Obama five months ago.

Ranked by population, Bangladesh is now the seventh-largest country on Earth, surpassed only by China, India, the United States, Indonesia, Brazil and Pakistan. Sometime in 2005, it overtook Russia — the world’s largest country in size — and now has more people than even Nigeria, Africa’s most populous nation.

Dhaka and its squalid, stinking slums are currently home to 12 million people, with another 500,000 (the equivalent of Washington, D.C.) moving into the capital city each year.

“To understand the pattern of our population explosion, you have to go back to 1947, when the Indian subcontinent was divided in two,” said Qader. “At that time, East Pakistan — today’s Bangladesh — had 40 million people, and West Pakistan had 30 million. By 1971, when we finally threw the Pakis out of Bangladesh, we already had 75 million. And from that 75 million in 1971, now we have 155 million.”

The 66-year-old diplomat started his career in 1968 at the Ministry of Foreign Affairs in Islamabad. After civil war broke out between East and West Pakistan, and East Pakistan became Bangladesh, he was forced to return to his native Dhaka via Afghanistan.

“It was a horrendous journey, really awful. I went through Kabul because I didn’t want to be sent to a refugee camp,” he said, recalling the atrocities suffered by Bangladeshis at the hands of Pakistani troops following the war. The fighting claimed anywhere from 200,000 to three million lives; another eight to 10 million people fled the new country to seek safety in India. 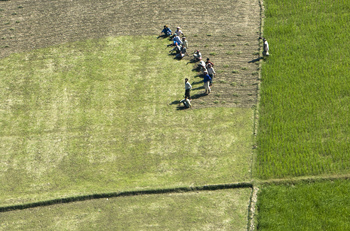 Back in Bangladesh, Qader gradually moved up the career ladder, eventually serving at embassies in Thailand and South Africa. In late 2009. the diplomat, who also has the rank of state minister, came out of retirement to accept the job in Washington. In his current position overseeing some 40 staffers, Qader is also accredited to Brazil, Mexico and Colombia.

Since 1972, he said, Bangladesh has received about $5 billion in assistance from the United States. This year, U.S. aid will come total $150 million and be used mainly for basic food staples.
Qader says that even though his government has managed to prevent Bangladesh’s population from spiraling out of control, more yet has to be done.

“For a long time, our growth rate was 3.2 percent a year. Then we brought it down through a series of strict measures to 1.7 percent. We are trying to reduce that further as much as possible,” he told the Diplomat. “We can’t possibly sustain this level of population growth. Even now, you can’t walk properly on the city streets, it’s so crowded.”

Enlisting the help of Islamic clerics in this devoutly Muslim nation has been a crucial factor in keeping a lid on population growth, he noted. “We’ve had a systematic campaign to encourage the use of contraceptives, giving special training to imams in mosques. They’ve been very influential in telling people there’s nothing in Islam which actually says you can’t practice birth control, because you’re not killing anyone.”

Thanks to a healthy economy and falling birth rates, Bangladesh will boost its annual per-capita income from $621 to $670 by year’s end, says Qader. While that still makes Bangladesh a very poor country, it’s doing far better than most of sub-Saharan Africa and is twice as rich as Haiti, whose per-capita income hovered around $300 a year even before the earthquake in mid-January.

“We’ve never dropped below 5 percent growth, even during this recession, and this year we’re expecting 6 percent growth,” said Qader. “Our aim is to become a middle-income country by 2021, which will be our 50th anniversary of independence. That means at least half of our people will be within middle-class range by then.”

But not if Bangladesh slowly sinks under the sea, which is exactly what climate scientists fear will happen if current trends continue. More than half of Bangladesh sits on a flood plain less than 20 feet above sea level — a fact not lost on neighboring India, which borders Bangladesh on three sides due to an oddly shaped geographical quirk Qader refers to as “the chicken’s neck.” The Indian government has begun building a reinforced barbed-wire border fence 2,100 miles long that will soon encircle nearly all of Bangladesh. Its aim: to keep out the hordes of millions of poor people on the other side.

Already, say experts, seasonal monsoons are becoming shorter, with too much rain over short periods of time, damaging crops and houses and causing flash floods followed by prolonged periods of drought. Many of the islands in the Ganges River delta have disappeared due to the frequent flooding, which has contaminated rice fields and water wells with salt, destroying agriculture.

The government of Prime Minister Sheikh Hasina warns that the human and social cost cost be huge as well. While creative microcredit and other social empowerment programs have significantly improved living standards — the number of Bangladeshis living in poverty has fallen by over 10 percent in the last five years — climate change will reverse those gains quickly, a situation Qader says is simply not fair.

“Bangladesh’s contribution in greenhouse gas emissions is negligible — only 0.3 metric ton per capita. But ironically, we have become one of its worst victims. We also feel that the Copenhagen summit did not achieve the best possible outcome,” he said. “Our prime minister demanded that adaptation funding must be at least 1.5 percent of GDP of the developed countries, separate from overseas development assistance.” 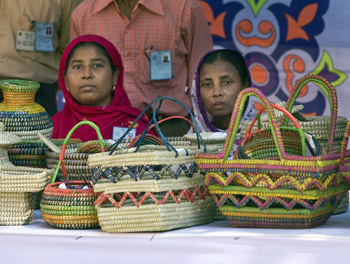 Beneficiaries of the Grameen Bank microcredit project for poverty eradication in Bangladesh display their weaved baskets at the market.

As such, Bangladesh will request 15 percent of the United Nations’ $30 billion adaptation fund which will become operational in January 2011 for helping developing countries with mitigation, adaptation and technology transfer.
“Bangladesh with its very insignificant share in per-capita emissions has not received the kind of attention and support that it deserves,” he complained. “Since there is a scientific consensus on climate change, the international community needs to translate this into political consensus for concrete global action.”

This issue is likely to be raised at an Apr. 9-11 summit in Bonn, Germany, aimed at injecting some momentum into climate talks after December’s disappointment in Copenhagen. In the meantime, said Qader, his government has established a $100 million climate change fund and a multi-donor trust fund with “contributions from friends” abroad.
“For Bangladeshis, there is no place to go,” he said. “Our adaptation plan consists mainly of dredging rivers, planting trees, building dams and constructing cyclone shelters in order to minimize the effect of climate change on our people.

This will have a direct bearing on our food security, so we are also constructing silos for food reserves.”

To pay for all this while improving living standards in general, Bangladesh relies on two chief sources of income: apparel exports and overseas remittances. Both, however, are in trouble due to the continuing economic crisis plaguing much of the globe.

In the past year, hundreds of thousands of Bangladeshi laborers have returned from Saudi Arabia, Kuwait, Qatar and the United Arab Emirates as Gulf economies feel the pinch. Workers in those countries send their families in Bangladesh an average $10 billion a year, a number sure to decline in 2010. It’s doubtful that efforts to find new manpower markets in Libya, South Korea, Iraq, Spain and elsewhere will pick up the slack.

At the same time, garments — which account for $12 billion of Bangladesh’s $15.4 billion in total exports — are declining too. In the last three months, said Qader, apparel shipments have tumbled 21 percent as a consequence of reduced demand in the United States and increasing competition from China.

To save the industry, Qader is lobbying Congress to lift duties and quotas on clothing the United States imports from Bangladesh. In 2008, his country shipped roughly $3.75 billion worth of apparel to U.S. buyers and paid 16 percent in tariffs — translating to around $573 million.

“You are taxing each Bangladeshi at the rate of $3.70 a year. This is money we could have otherwise used to implement our Millennium Challenge goals,” he said.

Yet the U.S. textile industry is urging Congress to reject proposals to extend duty-free preferences to both Bangladesh and Cambodia.

During recent testimony before the House Ways and Means Committee, David Hastings, vice-chairman of the National Council of Textile Organizations, said pending legislation threatens nearly two million textile and apparel jobs in the United States and countries with which it already has trade preference agreements.

“We have been told by many of the largest companies that source goods in Africa and the Western Hemisphere that they will move sourcing to Bangladesh and Cambodia if this poposal becomes law,” he said.

Hastings, who’s also the CEO of Mount Vernon Mills in Georgia, warned that if duties are removed, importers would get at least $1 billion in duties savings that would have otherwise been paid to the U.S. Treasury. In addition, he said, Bangladesh pays the world’s lowest wages and is repeatedly cited for illegal labor practices. Hastings noted that “the combination of extremely low wages and a transfer of $1 billion in duties from the U.S. Treasury will be impossible for retailers and importers to ignore.”

Qader retorted that his country in no way violates labor laws.

“This argument is not new. They’ve been saying this for years,” he told the Diplomat.”We have an AFL-CIO office in Bangladesh, and our labor unions are very active. Even the buyers occasionally visit Bangladesh and our garment factories to monitor all developments concerning our labor situation and worker rights.”

The ambassador added that if Bangladesh doesn’t export apparel to the U.S. market, China will gladly fill the vaccum.

“We urge the U.S. government to give us duty-free and quota-free access to our exports, because that would help us save a considerable amount of money which we could divert to more productive areas and help us meet the Millennium Challenge,” said Qader. “We have extremely good relations with the United States, but we need to further cement them as much as possible. We want to make sure our friendship reaches new heights.”