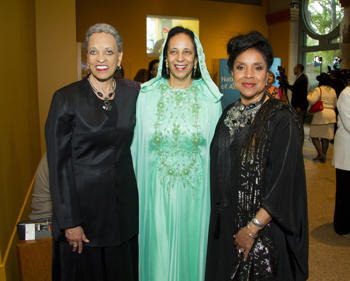 A $1.8 million gift from the Sultanate of Oman to the National Museum of African Art began with a dance.

After seeing Al Najoom, a traditional Omani dance troupe, perform in 2011, Nicole Shivers, education specialist at the museum, realized that the connections the Gulf Arab state has to East African culture needed to be shared. Those ties date to the 17th century, when the Omani empire ruled Zanzibar and reached into other parts of the region. Shivers set to work on a way to bring that history to Washington, and the result is the museum’s largest gift to date.

“It is important to highlight these connections because they give a better understanding of the region and the historical development of its multiethnic and multicultural civilizations,” said Hunaina Sultan Ahmed Al-Mughairy, ambassador of Oman to the United States. “This is a rare opportunity to see and learn about this region through its art and culture.”

“This connection between the two regions shows the great outreach of Africa across the world, which is an important element to the museum’s mission in telling Africa’s diaspora stories,” Shivers added. “This topic was new and less known for our museum demographic, focus and again to most people not in the scholarly world. I saw it as an opportunity to bring a new voice to the museum.”

She and Johnnetta Betsch Cole, director of the museum, contacted the Sultan Qaboos Cultural Center (SQCC), which brought Al Najoom here three years ago, about establishing an exhibit and the sultanate agreed to fund it. The gift was announced last November and will underwrite a two-year program called “Connecting the Gems of the Indian Ocean: From Oman to East Africa,” a series celebrating Omani and East African arts and culture.

“One of the SQCC’s missions is to introduce the people of the United States to Omani culture, so this project was the perfect fit and we are very proud to be a part of it,” Al-Mughairy said.

The first event was “Hamdan: Through the Gates of Tears,” a ballet commissioned by the museum with Howard University’s Theatre Arts Department that was performed April 11 and 12. The show is based on a folktale that tells the story of one man’s decision to leave his homeland of Oman on the Arabian Peninsula and move to Zanzibar in East Africa.

The next program in the series is an opera in September that will star mezzo soprano Denyce Graves and will also include musical performances, cultural discussions and a documentary, according to Shivers, project manager for the series.

Other programs include performances, workshops and web-based elements. For instance, there will be a lecture series featuring Omani artists and cultural scholars, a virtual exhibition of 19th- and 20th-century Omani postcards, as well as hands-on art workshops. The public will get the chance to try calligraphy or Majmar craft painting, a popular Omani activity that involves decorating frankincense burners. The series will also examine Swahili traditions and establish an art educators’ exchange program between the museum here and three locations in Oman. 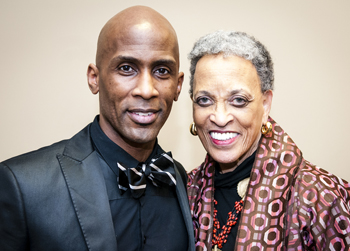 Choreographer Ray Mercer, left, and National Museum of African Art Director Johnnetta Betsch Cole celebrate “Hamdan: Through the Gate of Tears,” a modern ballet staged in April by Howard University as part of the museum’s cultural collaboration wth the Sultanate of Oman.

Washington may be half a world away from both East Africa and Oman, but it’s an ideal setting to showcase the region’s relationship, Al-Mughairy and Shivers said.

“The U.S. capital, aside from the obvious, has many world-renowned academic institutions, think tanks and research centers that attract students and people with various interests from around the world, which adds to the attraction of this great city,” Al-Mughairy said.

“It’s an international city that embraces its cultural offerings,” Shivers added. “The area has a thriving artistic community that is always in search of new means of cultural expression that tells an exceptional story.”

To that end, they hope the series of events leaves visitors enlightened.

“We hope that they will learn something new and amazing about that part of the world and maybe even see some of those influences in the culture here,” Al-Mughairy said.

Shivers said she hopes it will encourage people to continue learning about both the Gulf region and East Africa.

“I hope this introduction will lead them to explore connections in their own lives,” she said. “I hope it makes them think differently of Africa and the importance of the continent — and of course make them want to visit and study both Oman and East Africa.”

This collaboration sets the precedent for future work, she added.

“We are only scratching the surface of what we can do with this story,” Shivers said. “The historical connections between Oman and East Africa are so dense that elements can be continually explored. And the new contemporary relationship between the regions is emerging so I see great potential in this story as well.”

Connecting the Gems of the Indian Ocean: From Oman to East Africa