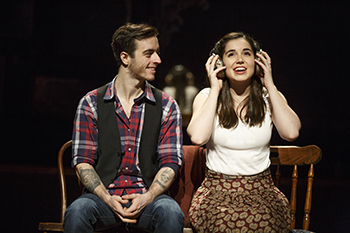 Sam Cieri, who plays one of the lead characters in the U.S. tour of the musical “Once,” has a newfound outlook on the play since he got to perform it in the play’s motherland.

Sam Cieri and Mackenzie Lesser-Roy, left, star in “Once,” about an Irish musician and a Czech immigrant drawn together by their shared love of music.

“The story is about an Irish singer-songwriter who falls in love with a girl who inspires him not to give up his music, and it is set in Dublin,” Cieri said. “I’ve been performing in the show for a year in the U.S., and over the summer I did it in Dublin, Ireland, before coming back for this tour. Doing it over there changed how I saw the show.

“I realized the play is a love letter to the city of Dublin and the country of Ireland and its people and music,” Cieri told us. “It’s about how music can start you and stop you as a person.”

Cieri effusively sang the Irish capital’s praises. “Performing in Dublin was amazing. For me, Dublin is the greatest place on earth. When you land in Dublin, it feels like you just came home with the warmth of the people and culture,” he said. “But coming back to perform the play in the U.S., it’s an awesome challenge to bring what I found there to U.S. stages…. The people look at things brighter, their eyes water over, the effects of the play are tangible.”

“Once” is the celebrated musical based on the Academy Award-winning film that tells the story of an Irish musician and a Czech immigrant drawn together by their shared love of music, which evolves into a powerful but complicated romance, heightened by the raw emotion of the songs they create together. The musical — which will have a limited run at the National Theatre this month and is helmed by acclaimed Scottish director John Tiffany — won eight 2012 Tony Awards and the 2013 Grammy Award for Best Musical Theater Album.

But the play isn’t at typical love story or musical, according to Cieri. 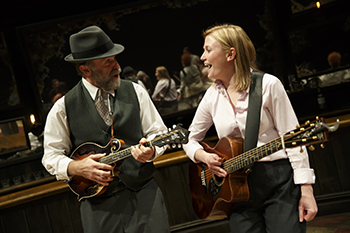 “The script isn’t a quintessential ‘guy-meets-girl’ love story and it can’t be tied up in a pretty bow,” he said. “I think when I first started working on the show, I foremost thought of it as a love story between two people. But now I realize it’s about what we people do and how that affects everyone around us. It’s much bigger than a love story and that’s why the play has been going this long, this strong and affects so many.”

The plot focuses on the unexpected, growing chemistry between a boy and girl, fostered by their mutual enchantment with and communication through music. Within the course of their quick romance, insecure Dublin street musician “Guy” is persuaded by “Girl,” who is enthralled by his haunting love songs, not to give up on his musical aspirations.

The musical is unusual in that actors play musicians and musicians play actors, who never leave the stage, which drives home the theme that music is ever-present in these fragile characters’ lives.

“The play is also unusual because it’s not your typical musical,” Cieri explained. “It’s not flashy, not cutesy, the characters don’t burst into song. It also isn’t set the same way most musicals are. With big musicals like ‘The Lion King’ or ‘Wicked,’ you have set tracks and the characters ‘stand here’ and ‘do this’ every night; it’s more like a formula. With ‘Once,’ it changes often. I don’t think the audience sees the same show twice. This show takes the risk of change. When we rehearse, we have the freedom to mold it around the actors and what’s happening on stage that particular night…. It’s a very fluid process.” 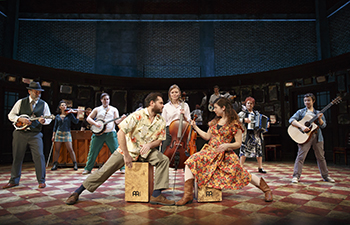 Guy starts the show singing what he thinks will be his last song. Each night, the song comes out a different way, Cieri said.

“Some nights I feel like I’ve been on a bus for seven hours; I’m so tired I can’t believe I’m standing. So the song comes out like a Hail Mary task,” Cieri said. “Other nights my song ignites the scene. Those times where I have so much energy, I’ll give it everything I can. It gives the show a completely different energy.

“One thing I do know that’s constant is that the show is heavy and emotional and exhausting,” he said. “If we don’t look like we’re empty by the end of the show, we didn’t do our job that night. We definitely need a drink after the show.”