Home The Washington Diplomat July 2016 Op-ed: Obama Not to Blame for Region’s Failures 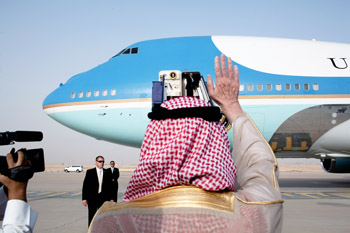 President Barack Obama waves goodbye from the steps of Air Force One as he departs King Khalid International Airport in Saudi Arabia on his way to Egypt on June 4, 2009. Obama’s famed Cairo speech led to hopes of a renewed period of relations between the U.S. and Arab world, but ties have been strained since the Arab Spring and Washington’s nuclear deal with Iran.

Gordon’s observation was a wisecrack, but it had a ring of truth to it. Added together, the three lessons have led the president to a policy of caution and incrementalism that has been seen in the region as indecisive and weak. It helps to explain why Saudi Arabia and the other Arab sheikhdoms of the Gulf have been so frustrated over the president’s policies in the region during the past few years.

Whether that frustration is justified is irrelevant; Obama’s successor will inherit a relationship with Saudi Arabia and the others that is troubled by mistrust and doubt about the strength of U.S. commitments, even though it is firmly rooted in security cooperation and economic ties. The United States has troops, planes and warships all across the region and is imbedded in the security and military operations of Saudi Arabia and all its neighbors. The Saudis, in particular, have no realistic alternative to their security partnership with Washington, but the Gulf Arabs have found that cold comfort.

The list of Saudi grievances with Washington is by now well known. It includes the disastrous U.S. invasion of Iraq, which predates the Obama administration, and includes the failure to act strongly in Syria, the perceived abandonment of Egypt’s Hosni Mubarak and above all the nuclear negotiations with Iran. Beyond those specifics, there is a widespread understanding among Gulf leaders that the world has changed in ways that they cannot control — the transformation of the oil market, the fallout of the Arab Spring — and that relationships established over many decades are in flux as well. It makes them uncomfortable: They want the United States to fix things, to take a firm hand, to bring stability in place of violence and order in place of chaos. They have been unable or unwilling to accept the fact that Obama has wanted to do the opposite and avoid large-scale involvement in any of the region’s multiple crises.

The past seven years have taught him, the president has said, that even if he personally believed that the future of the Middle East was vitally important to U.S. national interests, there is only so much that the United States can or should do to bring about stability there.

Given the scope and durability of U.S. security commitments in the Gulf, much of the criticism coming from the region reflects the mood of the day and cannot stand up to serious analysis. Neither the Saudis nor the other Gulf states have made clear exactly what they think the United States should do in Syria, or in Libya, or what they think Washington could have done to save Mubarak.

It may be fashionable in the Gulf, but it is also unseemly and contradictory to criticize Obama for being indecisive and failing to take strong action to bring down a regime in Syria while simultaneously criticizing his predecessor for being decisive and taking strong action to bring down a regime in Iraq. That criticism reflects Gulf Arab attitudes about Iran more than about the United States: It was wrong to take down Saddam Hussein because he was a bulwark against Iran, but it would be right to take down Bashar al-Assad because the Syrian president is an ally of Iran. And it may be easy to flog the United States for decisions it has made about Iraq and Syria, but there is no way to blame Washington for the war in Yemen, or the rise of the Islamic State or for the internal rivalries among the six states of the Gulf Cooperation Council, which have inhibited unified action against threats to their security.

To the Saudis especially, the president has made it clear — or tried to — that the United States will stand by them and will do what it can to ensure regional security, but that support will not include the deployment of large numbers of troops. Even if he were willing in principle to make a major commitment of lives and money, the president would be reluctant to do so because he cannot see how that would solve the Middle East’s problems.

“There’s a playbook in Washington that presidents are supposed to follow,” the president said in his interview with Jeffrey Goldberg in The Atlantic. “It’s a playbook that comes out of the foreign-policy establishment. And the playbook prescribes responses to different events, and these responses tend to be militarized responses. Where America is directly threatened, the playbook works. But the playbook can also be a trap that can lead to bad decisions. In the midst of an international challenge like Syria, you get judged harshly if you don’t follow the playbook, even if there are good reasons why it does not apply.”

In Saudi Arabia and other Gulf countries, surrounded as they are by war and chaos in Yemen, Iraq, Syria and Libya, fearful of the Islamic State and confronted by an aggressive Iran, those presidential attitudes have been perceived as retreat from the longstanding U.S. commitment to their security. The Gulf Arabs have consistently failed to acknowledge that, except in Iraq, the region’s multiple failures are not America’s fault and that Obama feels justified in asking them to do more to clean up what is partly their own mess.

Whoever becomes president in January may well wish to separate himself or herself from Obama’s policy on this conflict or that in the Middle East, but will find scant constituency for more forceful action. The president of the next four years will be commander in chief of a U.S. military whose leadership has shown no appetite for greater direct involvement. 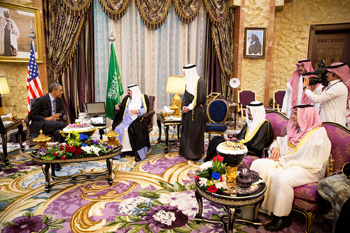 “We have an important role to play in providing for the security of the Central Region,” which includes the Gulf, Gen. Lloyd J. Austin, outgoing commander of the U.S. Central Command, said in his final annual report to Congress in March. “That said, we also recognize that we cannot solve every challenge through direct U.S. military action alone. While supporting and enabling the efforts of partner nations, we must help them build additional needed military capacity. The goal is to empower them to provide for the security of their sovereign spaces and confront regional security challenges such as those posed by Iran. We must also encourage our partners to actively counter radical ideologies and address the underlying currents that contribute in large part to the instability in the region. American efforts, including the U.S. military, can buy time and we may encourage others to do what is necessary. However, we cannot do it for them. Only the people of the region can bring about the needed changes.” That might have been the president himself speaking.

At his Gulf security summit at Camp David in 2015, Obama made clear to the Gulf Cooperation Council leaders that the United States was committed to the agreement to limit Iran’s nuclear weapons capability and would go ahead with it, whether they liked it or not. Facing that reality, and understanding that they had little leverage, the Saudis and the others grudgingly gave their assent. Since then, in official communiqués and most of their public statements, the Saudis — who have more people and a larger defense budget than the five other GCC states combined — have endorsed, or at least accepted, Obama’s broad strategy, which is to help them secure themselves by supplying weapons, training and logistical support.

In their joint statement after meeting in Riyadh in April, the GCC leaders and the president said they “reaffirmed their support for the common principles decided at Camp David [in 2015], including a shared recognition that there is no military solution to the region’s armed civil conflicts, which can only be resolved through political and peaceful means; respect for all states’ sovereignty and non-interference in their internal affairs; and the need for inclusive governance in conflict-ridden societies as well as protection of all minorities and of human rights.” The GCC leaders “reaffirmed” their endorsement of the Iran nuclear agreement, and the United States declared once again that its “policy to use all elements of power to secure its core interests in the Gulf region, and to deter and confront external aggression against its allies and partners, as it did during the Gulf War, is unequivocal.”

The GCC leaders and the president said that they “agreed to continue close coordination on shared concerns via meetings of foreign and defense ministers, hold an annual summit-level meeting, collaborate on additional security initiatives, and engage in a significant U.S.-GCC military exercise in 2017.”

That is a deeper level of engagement than the United States has with any other partner, except perhaps the NATO allies. Who else is guaranteed “an annual summit-level meeting with the United States?” Nevertheless, whether the next president reaffirms that commitment, modifies it or repudiates it, no amount of meetings or “close coordination” will resolve to the satisfaction of the Saudis that one issue that matters most to them: their rivalry with Iran.

It did not sit well with the Saudis when Obama said that Riyadh and Tehran should rise above their differences and come to some accommodation. In their view, the region is not big enough for both of them: for an anti-Western, Shiite-dominated theocratic republic that has spread its influence from Lebanon to Yemen, and for a Sunni monarchy that claims supremacy in Islam and is closely aligned with the United States. The Saudis suspect that Washington seeks an easing of tensions with Iran as a prelude to a broader engagement with a country that is potentially a more appealing partner than Riyadh. Iran’s leaders have rejected any such notion, but unless the incoming president repudiates the multinational nuclear agreement with Iran, that cloud of Arab suspicion is unlikely to dissipate.

Thomas W. Lippman is an award-winning author and journalist and adjunct scholar at the Middle East Institute (MEI). This paper is part of a MEI scholar series titled “The Middle East and the 2016 Presidential Elections.”