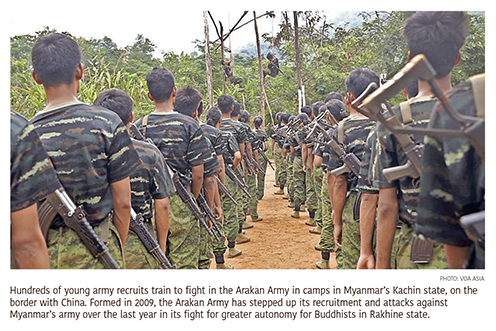 As Nobel Laureate Aung San Suu Kyi, Myanmar’s de facto prime minister, defends her country against allegations of genocide at the International Court of Justice at The Hague, international attention is once again focusing on the horrific events in Myanmar’s western state of Rakhine.

That’s where U.N. investigators say the army launched a brutal crackdown with “genocidal intent” that forced over 730,000 Rohingya Muslims to flee to neighboring Bangladesh in 2017.

Yet, while the court deliberates, the volatile, poverty-stricken state is facing a new horror: a rapidly escalating insurgency between the Myanmar military, known as the Tatmadaw, and the guerillas of the Arakan Army (AA).

While Myanmar’s Rohingya Muslim minority has long been marginalized and attacked by the country’s Buddhist majority, which regards them as illegal immigrants from Bangladesh despite their centuries-long presence in the region, the Arakan Army is composed of fellow Buddhists who make up the majority of the population in Rakhine.

But Rakhine Buddhists are distinct from the dominant Bamar ethnic group that governs Myanmar, and they consider their state — once part of an independent kingdom known as Arakan — separate from the land that until recently was known as Burma. In fact, Rakhine Buddhists share the Burmese military’s hatred of Rohingya Muslims, even though the military has persecuted Rakhine’s Buddhists and Muslims alike.

The Arakan Army was formed in 2009 to fight for greater autonomy from the central government. In recent months, the guerilla force, which reportedly numbers anywhere from 4,000 to 10,000 troops, has stepped up its recruitment and attacks, prompting the Tatmadaw to unleash a violent counteroffensive.

This fresh conflict in Rakhine has already claimed many lives, while creating a new surge of people fleeing their homes. It also illustrates the complex history and deep-seated ethnic grievances that lie behind much of this region’s turmoil. 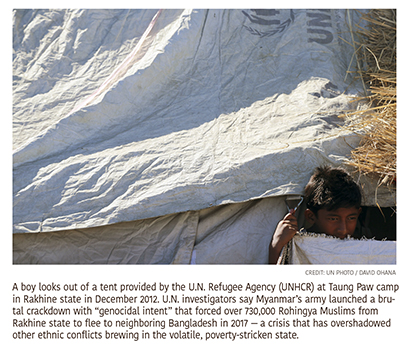 Indeed, while the International Court of Justice proceedings concern the fate of Myanmar’s Rohingya Muslims, there are other perceived injustices that many in Rakhine would also like to see placed under the international microscope.

In an Aug. 26, 2019, report by Al Jazeera English, the Arakan Army’s deputy commander lamented that their struggle is being overlooked because of the plight of the Rohingya as he urged the international community to “feel for us, too.”

Rakhine, also known as Arakan, is the poorest of the states that make up the Union of Myanmar. According to a 2014 World Bank report, 78% of the population live below the poverty line — twice the national average.

Yet, Rakhine is also rich in natural resources, with its offshore oil and gas fields serving as one of Myanmar’s top export earners. Its highly fertile river and coastal lands also once made it a major producer of rice, seafood and other agricultural products.

A land of winding rivers, coastal villages, densely jungled hills and ancient temples, it also has an important geostrategic location, lying on an east-west corridor between mainland Southeast Asia and the Bengal region, as well as a north-south corridor between China and the open sea.

The city of Mrauk U in central Rakhine was once the capital of a powerful Arakanese kingdom, which dominated the Bay of Bengal for centuries. Under its Buddhist kings, the wealthy court was also home to Christian Portuguese warlords, Dutch traders, Muslim Bengali poets and Hindu brahmins. 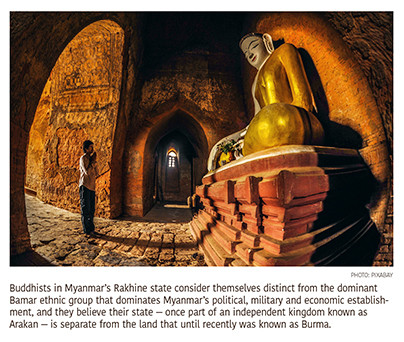 In 1784, however, the neighboring Burmese empire invaded, conquering Arakan and sending a wave of refugees fleeing over the frontier into then-British controlled Bengal. Some 40 years later, in the First Anglo-Burmese War, the British then annexed Arakan to their Indian empire – opening the frontier to large-scale population movements from neighboring, mainly Muslim Bengal.

Later, Arakan was the scene of brutal fighting between Japanese and British imperial troops during World War II. The state then stayed part of the British Empire until 1948, when it was placed together with Britain’s Burmese possessions and given its independence as part of the new Burma, now known as Myanmar.

This historical background is important because many in Rakhine see it as highlighting their difference from the Bamar, or Burmese, ethnic group that dominates Myanmar’s political, military and economic establishment and — Arakan nationalists argue — continues to exercise colonial-style control over their territory.

Many Rakhine Buddhist nationalists also argue that this history shows they are different from those described as “Bengali,” the derogatory term that Myanmar Buddhists use for the Rohingya, whom they see — often wrongly — as recent immigrants or descendants of Bengali workers brought in during British times, even though they have lived in the country for generations.

Rakhine is thus a three-cornered crisis, with Rakhine Buddhist nationalists increasingly strident against both Rohingya Muslims and the central Burmese authorities, be they the government of Aung San Suu Kyi and her National League for Democracy (NLD), or the Tatmadaw army.

Fueling this animosity, too, has been the glaring dichotomy of a state rich in resources but mired in poverty.

“We have oil and gas,” one local businessman, who did not want to be named, told The Washington Diplomat during a visit to the state capital of Sittwe in October 2019. “But it all goes into a pipeline to China. The money for it then comes back not to us, but to the Myanmar government. We don’t see a penny.” 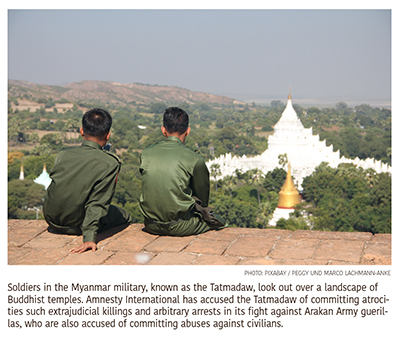 Indeed, oil and natural gas pipelines from the offshore Shwe field do snake across the state these days from the southern Rakhine port of Kyaukpyu, on the Bay of Bengal. Part of the Chinese Myanmar Economic Corridor (CMEC), this trade is worth billions of dollars to Myanmar’s coffers.

Meanwhile, many villages in Rakhine do not even have electricity. “We catch fish and have seafood farms,” Zaw Chew, a market trader living near the coastal town of Myebon told this correspondent, “but with no power for refrigeration, we can’t transport any of it to markets further away than our local one.”

Meanwhile, Myanmar’s 2015 elections, won by the NLD and heralded as ushering in a new era of democratization, only reinforced the view of many in Rakhine that the Burmese still want to control their land. While Arakan nationalist parties won a majority of the local votes, Suu Kyi appointed an NLD supporter as governor of the state — a position with major policymaking powers. Suu Kyi’s attempts to forge a ceasefire with all of Myanmar’s ethnic groups have also stalled.

“They [the Burmese] always see us as a province of their kingdom that has to be controlled,” the Sittwe businessman told us. “Their attitudes never change.”

History is also important in Rakhine because it was an annual rally commemorating the fall of the Rakhine kingdom to the Burmese, held in January 2018 in Mrauk U, that triggered the current unrest.

Police attempted to ban the rally and, when it went ahead anyway, at least seven people were killed and many injured when police opened fire.

Since then, the conflict has escalated. The AA, which wants self-determination for Arakan, has seen its support surge, with guerillas now commanding around 10,000 troops, including a growing number of women who have joined the fight after losing loved ones. Starting from bases in neighboring Chin state, they launched a wave of hit-and-run attacks in Rakhine in January 2019, on Myanmar’s independence day. Suu Kyi’s response was to order the Tatmadaw to “crush” the AA, whom she labeled “terrorists.” 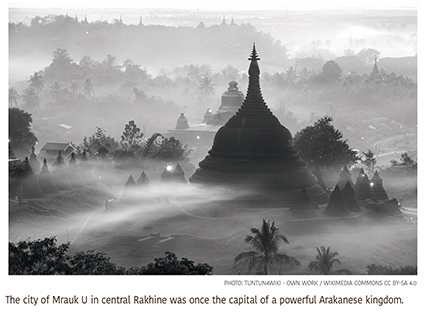 Now, there are daily reports of clashes between the Tatmadaw — which Amnesty International has accused of committing atrocities such extrajudicial killings and arbitrary arrests — and the AA — which is also accused of committing abuses against civilians — as artillery, helicopter strafing, ambushes and assaults bombard central and northern Rakhine. A number of hostages, including one national parliamentarian, have been taken by the AA, which reportedly buys some of its weapons through the drug trade.

Meanwhile, thousands of villagers have fled the fighting, seeking shelter in Buddhist monasteries and camps for the internally displaced around the state. Rakhine has also been under an internet blackout and curfew since fighting intensified.

“We have observed an increasing number of civilian casualties, including victims of landmines, armed clashes and shelling,” Stephan Sakalian, resident representative of the International Committee of the Red Cross in Yangon, told The Washington Diplomat. “Tens of thousands of people have lost, to various degrees, access to their land or livelihoods due to fighting, especially in central Rakhine.”

This is the area where the Myanmar government has encouraged some of the 700,000 Rohingya refugees currently in Bangladesh to return to, although so far no refugees have willingly returned, justifiably fearing for their lives. The government is also keen to increase foreign investment in Rakhine, a key part of the CMEC, with Kyaukpyu set to become the venue of a deep sea port and industrial zone in China’s Belt and Road Initiative.

But instability in the state continues to mount, as the Arakan Army forges alliances with several other ethnic armed groups in various parts of Myanmar, such as the Kachin Independence Army. AA commander Maj. Gen. Twan Mrat Naing has also sworn that in 2020, he will set up his headquarters in Mrauk U, a move likely to further enflame tensions.

Thus, while Myanmar faces the International Court of Justice and a string of other international tribunals and potential economic sanctions for its treatment of the Rohingya, who have long since fled the area, Rakhine continues to burn, its centuries-long history of conflict unhappily far from over.