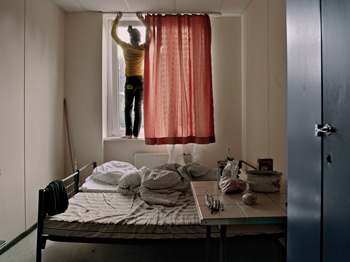 Now in its sixth year, “gute aussichten” is a German competition for graduate photography students — the results of which can be seen at D.C.’s Goethe-Institut each year — that consistently speaks not only to the rising young talent coming out of Germany, but of the shifting moods in photography itself.

The work is neither identifiably German or young, but rather it suggests the loosening of borders, a growing disappearance of blatant regional and national context. The photography itself seems to be turning inward, focusing on technique and palette as opposed to content flavored by individual viewpoint.

Whereas in previous exhibitions you found German photographers using their lenses to expose different lives and lifestyles in Germany and Europe, the latest in this series sees the photographers often creating the content, obscuring it, manipulating it and distorting it — all in a kind of effort to reinvent and revive the medium.

In this sixth edition, the implicit idea — not a novel one — seems to be that photography, like painting, can lie, can hide the truth, or make suggestions that pure documentary cannot.

According to the Goethe-Institut’s official description of the show: “In the age of Flickr & Co., photography as purely an illustration of reality is becoming less important. This year’s collection of works is characterized by the young talents’ wish to create arrangements, productions and modeling as a ‘pictorial illusion,’ sounding out and exploring the possibilities within the medium of photography. Many of the winners reference qualities, appearances and compositional principles of paintings down through the ages.” 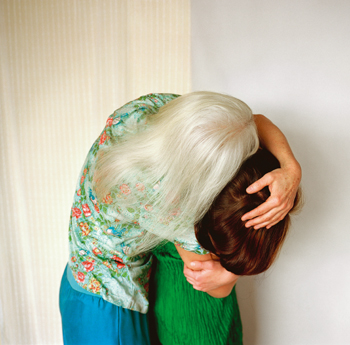 The result is a fascinating exhibition, echoing concerns from previous generations of photographers about how to make photographs artistic, a troublesome topic that often plagued the medium’s pioneers.

The winners of the 2009-2010 competitions generate something original whereby the message is the medium, creating what often appear to be painterly realities — posed subjects and set-up environments with all the tools at hand. Everything seems familiar, although nothing is quite as it should be — in total, the works represent a group of Potemkin villages of the mind, artificial creations of distorting mirrors and fun houses.

All of the works possess this magic. Take Anna Simone Wallinger’s “Container” series, which is really documentary in nature because the subject matter depicts the “containers” in which immigrants in Berlin are housed while they await formal processing. It’s a surreal world, and once again, it’s not quite right — not a prison per se, but a small living space where people have rearranged things, including their own bodies, to find room, to breathe and dream of a new reality. Yet at the same time, the photos are more than just documentary, with a tightened kind of photographic power.

Or take a look at Mona Mönnig’s series titled “Man-made Wonders,” which is laden with heavy irony and stark, wondrously beautiful images of animals, from puppies to ponies to furless cats. They all make you smile initially, but then again they don’t. These are animals that have been crossbred to produce something new, specific breeds expensively created to showcase animals as if dropped from heaven from the hands of an invisible creator. Their artificiality makes the photographic results artificial too, as if caught in an act of illusionist conspiracy.

Then there’s Ingo Mittelstaedt’s “Capsules,” arranged images of graceful debris — lost, and destroyed though not quite recognizable as individual leftovers. The images have obviously been manipulated, with the lighting and placement creating classic still lifes of discarded items, but of what exactly it is difficult to discern. 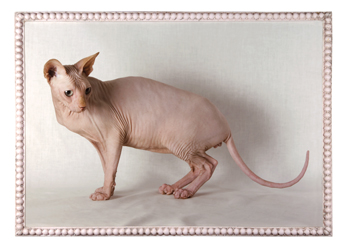 Ute Klein does a similar thing with a series called “Resonant Entanglements,” in which couples, often in very loose clothing, are locked in various kinds of awkward-looking embraces. The immediate effect is dramatic and then puzzling, and then, almost triumphantly hurtful. We don’t know what’s happening — the faces are obscured, the energy seems intense, but we can’t tell if it’s a sign of passionate love, a grasping hopelessness, something fearful, violent or tender.

Every one of these photographers has captured images but not through happenstance. There is some immediate truth here, but this is photography doing the job of what painters did for centuries — create art while reflecting a pseudo kind of reality. And in creating this new reality, these students have added yet another dimension to photography as both an up-and-coming and still-thriving art form.