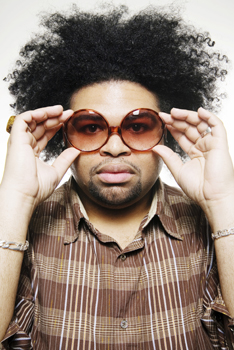 Less than a decade ago, most patients had one option for permanent vision correction: LASIK, which is still the most widely known (and most popular) type of procedure.

Today, folks eager to ditch their eyeglasses and contact lenses face a wealth of options to improve their eyesight. But the sheer number of different procedures can be an eye-opening — and eye-popping — experience to any novice. PRK, Wavefront, Presby-LASIK and now Orthokeratology, one of the latest advancements in non-invasive vision correction, are just a few of the available techniques.

So, how do you decide what’s right for you? That depends on a number of factors, including everything from your lifestyle and comfort level to the shape and thickness of your cornea.

The doctor you choose, assuming he or she is experienced and attentive, is going to be the best resource for selecting a procedure. Still, you’ll be narrowing things down from a list of many hundreds of practicing eye surgeons in the greater Washington area.

So to get you started, we spoke with several top local optometrists to help break down a few of the most popular options and latest advancements to help you better see the bigger picture.

The most well-known and popular type of refractive eye surgery is still LASIK. The procedure works by permanently altering the shape of the cornea, the transparent covering on the front of the eye, to correct abnormalities that cause the need for glasses.

In the early days of LASIK, surgeons used a small blade device to cut a flap in the cornea. Today, most surgeons have replaced the blade with a risk-reducing laser device (you’re likely to hear terms like femtosecond laser or laser keratome). A hinge is left at one end of the flap, which is folded back so that pulses from a computer-controlled laser can vaporize the midsection of the cornea, known as the stroma, before the flap is replaced.

The benefits of LASIK are widely known. Rapid healing, instant return of vision and a lack of pain have made it the most popular choice for permanent vision correction for years.

Potential downsides can include dryness in the eyes for up to a year after surgery. Some patients also need enhancements — a second and sometimes even third reshaping of the cornea to get the vision exactly right — and many still develop presbyopia, and the need for reading glasses, in later years.

Presby-LASIK (also called P-Lasik) is a relatively new advancement that does what basic LASIK can’t do: restore up-close vision for people, typically 40 or older, who start to need reading glasses due to presbyopia, a condition of aging whereby the lens of the eye loses its ability to focus, making it difficult to see objects up close.

Presby-LASIK combines two different treatments — both approved by the U.S. Food and Drug Administration — to reshape the cornea in a way that restores an increased depth of field, according to Dr. Nancy Tanchel, medical director of Liberty Laser Eye Center in Vienna, Va.

The procedure involves the use of a specialized laser that enables surgeons to correct problems associated with both near and distance vision. Because the treatment is more complex though, patients are more likely to need future enhancements.

“It’s more difficult to get it perfect the first time, although it’s still not a high risk,” Tanchel said. “I’d say about 25 percent of patients need an enhancement with Presby-LASIK.”

One of the many other forms of LASIK available today, Wavefront technology enables surgeons to see even the subtlest distortions of focus by creating a highly detailed “map” of how light moves through the eye. This procedure can help reduce incidence of post-surgery issues like glare and poor night vision. 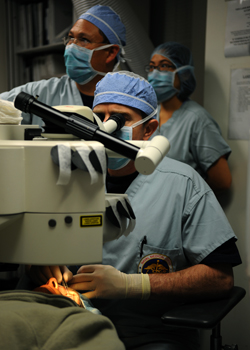 Capt. David J. Tanzer, specialty leader of Navy Refractive Surgery and director of the Refractive Surgery Program at San Diego’s Naval Medical Center, performs a photorefractive keratectomy (PRK), which uses a laser to ablate the outer surface of the cornea.

Photorefractive keratectomy, or PRK, involves removing the cornea’s outer layer and using a laser to reshape it. Unlike LASIK, PRK is performed on the surface of the eye, rather than between the layers of the cornea. Healing typically takes days, and for many patients it can be weeks before vision is returned completely.

In addition to a longer healing process, PRK may slightly increase the risk of an infection, according to Tanchel. But there’s an upside, as well: The procedure doesn’t involve creating a flap that could be potentially dislodged as a result of eye trauma, making it an appealing choice for many athletes and others involved in high-contact sports and activities.

“If you’re willing to wait a few months,” said Tanchel, “it’s probably the safest procedure to have in terms of sports.”

LASEK, or Laser Epithelial Keratomileusis, is similar to PRK. In this procedure, the surgeon removes the epithelium, the outermost layer of cells of the cornea, and then replaces them after reshaping the eye. LASEK is sometimes recommended for people with thin corneas that can make traditional PRK more challenging.

Orthokeratology, or Ortho-K, was approved by the Food and Drug Administration in 2002, but is only now starting to make its way into the mainstream knowledge of vision correction options, according to Dr. Michael J. Weitz, the only optometrist in D.C. and Maryland who’s a fellow of the Orthokeratology Academy of America.

There’s no surgery involved in the procedure, which instead involves special contact lenses that are worn at night to gently mold the cornea. The process — also referred to as Corneal Refractive Therapy and Vision Shaping Treatment by lens manufacturers — allows patients to see clearly without the need for glasses or lenses during the day. It can take anywhere from a week to a couple of months to reach 20/20 vision by sleeping with the lenses nightly, after which time many patients wear them once every three days or so.

The only known risk of Ortho-K, Weitz says, is the slight possibility of infection, which is true of any contact lenses worn overnight. Benefits include the non-invasive nature of the procedure, which can be reversed at any time by ceasing use of the lenses.

“I like the non-invasiveness of Ortho-K,” Weitz said. “There’s no scarring because we don’t have to operate. It can also be used as a solution for former LASIK patients whose vision is changing.”

And, he adds, unlike surgery, Ortho-K can be used to treat children and young adults under the age of 21.

“Age is no restriction for Ortho-K,” he said.

In fact, Weitz pointed out that several recent major studies have shown the ability of Orthokeratology to greatly reduce the progression of nearsightedness in children and teens. It’s a big plus, especially when the incidence of nearsightedness among the general population ages 12 to 54 has increased by more than 16 percent since the early 1970s, he notes.

Most insurance plans still aren’t covering vision correction surgery, which is an issue for many, particularly younger, patients.

On the other hand, when compared with the cost of annual eye exams, contact lenses and glasses, most procedures pay for themselves within four to seven years, according to Tanchel.

Costs can vary, but the competitive nature of the vision correction industry means that any discrepancies are slight. Expect to pay anywhere from $1,500 to $3,000 per eye for LASIK, PRK and LASEK, and possibly a little more for Wavefront-guided procedures.

For Orthokeratology, fees generally range from $1,500 to $2,500 for both eyes, with replacement lenses (which typically last one to two years) costing roughly $400 to $900.

For all procedures, the upfront costs usually include all pre-surgery exams and a year of follow up. If you see prices that are drastically lower than typical ones, especially promotional rates in the hundreds, there’s a good chance it’s an advertising gimmick that will later involve a lot of added fees, Tanchel said.

You’re considering permanently altering the shape of your eyes, so this isn’t the time to simply shop around for the cheapest option, Tanchel advised.

“No one tries to find the cheapest practitioner when they need heart surgery,” she said. “The same should be true of refractive surgery.”

“You want to pick out someone with a good bit of experience who’s willing to see you before surgery,” she added. “Ask all your questions and make sure you’re comfortable. You want to go somewhere where they’ll be paying attention to you if, heaven forbid, something were to go wrong.”