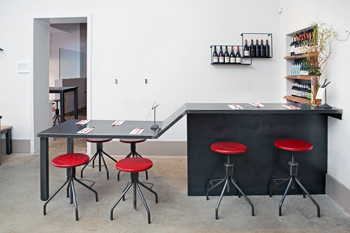 After construction of a massive redevelopment project on U Street forced it to close temporarily, DC Noodles recently reopened with a fresh, albeit somewhat sterile, new look.

After the presidential inauguration of 2009, Sak Pollert shut down Simply Home, his U Street establishment that paired Thai cuisine with a boutique featuring home furnishings, gifts and fresh flowers. But he didn’t abandon the unusual concept altogether.

Like all smart businessmen, he reassessed his market and decided to rework the concept. What emerged was one of the earliest and best upscale Asian noodle venues in the area. A vanguard in the trend that has been growing steadily since 2009, DC Noodles kept a few successful items from the Simply Home menu but shifted the focus from Thai cuisine to a more pan-Asian approach based almost exclusively on the remarkable versatility of this humble carbohydrate.

Then, over a year ago, construction of a massive redevelopment project on the southwest corner of 14th and U Streets called Louis forced DC Noodles and Stem (the retail portion) to close temporarily. Once again, Pollert had the opportunity to take stock of what he had and where he was going. At the end of November, DC Noodles reopened like a Phoenix rising from the ashes.

The DC Noodles menu has not changed much since the reopening, though it has been redesigned. Deconstructionist in layout, it gives diners the opportunity to build their own combinations within a specific style of noodle dish, a flexible approach that accommodates a broad range of dietary requirements and whims. Starters include different versions of steamed buns, skewers, dumplings and fried dishes. The spicy beef steamed bun, accented with pico de gallo, chives and wasabi sour cream, is a sophisticated take on this usually plain dish, while the pork moo-ping skewer marinated with honey and sambal oelek chili paste and toasted sesame seeds is a delicious alternative to the more standard chicken and peanut sauce.

“Healthy bites,” including edamame, garden rolls and green salad, sound simple but rely on intense flavors for their distinction. Sesame-kaffir hoisin enlivens the spring rolls (which at first glance bear a striking resemblance to stuffed cabbage rolls), while corn and crispy noodles elevate the salad. 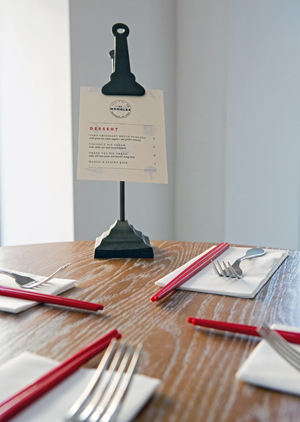 Perhaps one of the best starters on the menu, a holdover from Simply Home, is chef Ztang Ruangsangwatana’s pumpkin empanada. The modest little appetizer — with its perfectly flaky pastry, rich squashy filling, and accents of cilantro and cucumber relish — is proof that sometimes the simplest dishes stand as a testament to a chef’s skills.

The main noodle dishes are broken into four categories based broadly on style of preparation. Wok noodles are classic Thai dishes, some prepared in the traditional way (pad Thai and pad see ewe), others updated, and all with a choice of protein. The drunken noodles, prepared with either traditional wide rice noodles or surprising squid ink spaghetti, are only slightly spicy.

Another category, the noodle soups, begins with one of three broths. All are light and flavorful, but the spicy ginger version, made with roasted chili paste, fresh ginger and Szechuan hot oil, is a real standout. Add in a choice of one of four noodles and one of six proteins and you get a robust version of traditional Vietnamese pho topped with bean sprouts, cilantro, scallions, toasted garlic, string beans and ground peanuts. Leave out the broth and the dish becomes one of the noodle salads on the menu.

HoMU noodles, the house specialty, are an interesting collection of dishes reflecting a range of Asian origins. The sosu yakisoba — a deep bowl of sautéed egg noodles topped with grilled salmon, vegetables and toasted nori seaweed — hails from Japan, as does an enticing tempura ramen salad. More difficult to classify but no less satisfying is the stir-fry beef ragu served over rice noodles, with a tomato-turmeric soy and serrano vinaigrette.

The final category on the menu is the curry noodles. By far the richest dishes on the menu, each version again offers a choice of proteins but comes with a specific variety of noodles, each of which is quite distinct. Burmese kao soi features egg noodles with a turmeric- and cumin-flavored sauce. The green curry entrée features squid ink spaghetti with eggplant and basil, while the red curry version partners spinach linguini with kabocha squash.

Many of DC Noodle’s dishes are garnished with deep red tangles of beet threads, a reminder of the importance of beet chemistry in the umami (savory flavors) of Asian cuisine. The image of the beet threads is echoed in the unusual red spaghetti-like fixtures that dimly light the two dining rooms.

The menu includes a few dessert choices that are mostly in keeping with the rest of the dishes. Mango and sticky rice is less sweet than typical renderings and has more texture because the rice is a crunchy, nutty, purplish variety. The coconut ice cream is rich and mild, while the bread pudding is a dense but delicious choice. Green tea ice cream, served over the same excellent rice, is only slightly sweet, punctuated by the strong seaweed flavor that characterizes green tea. 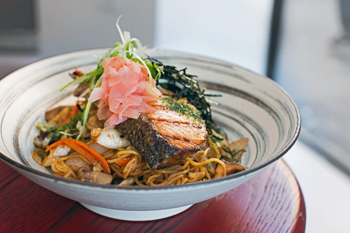 The new DC Noodles is considerably larger than its former self. Pollert closed Stem permanently, using the former retail space to expand the restaurant while revamping the dining areas. The cartoonish mural from the old space is gone, as is much of the color. The new DC Noodles takes minimalist décor to new levels, unfortunately creating a rather cold and somewhat uninviting ambiance. Stark gray walls and low lighting have an almost ice cave feel, but without the sparkle. The main dining room has an interesting and pretty shrine-like display next to the bar (DC Noodles offers a selection of classic cocktails from a full-service bar and several good beer and wine choices.), but it is not enough to relieve the overall flatness of the space. Backless seating further discourages lingering over a meal with friends. Staff on the other hand have been warm and inviting, and go a long way to making the experience a pleasant (though not always efficient) one.

The new DC Noodles is a conundrum. The food is overall excellent (though some might find it a bit on the salty side) and worth a trip. However, the atmosphere may not encourage you to stay long or visit again. That would be a pity because while the menu at first glance appears limited, with the multiple combinations possible, each visit can offer a new taste experience. It will be interesting to see whether Pollert decides that less is not always more, especially when it comes to light and ambiance, and makes a few more adjustments to make the new DC Noodles the repeat destination the food suggests it should be.