“How’s that for a theater built in a week?” Susan Galbraith, the president and artistic director of the Alliance for New Music-Theatre, asked standing in between a newly erected stage and rows of seats in the subterranean space below Dupont Circle.

Once a trolley station and a fallout nuclear shelter in previous lives, the space is no longer abandoned — it is now a home to an arts and culture nonprofit dubbed Dupont Underground.

“Nobody believes there’s anything down here, and then they come and are wowed,” Galbraith said.

As Dupont Underground Art Director Noel Kassewitz joked to The Washington Diplomat on a recent visit to the space, “Can you highlight the ‘we’re not abandoned angle?’ People come down and ask, ‘Is this the Metro?’”

It’s certainly not the Metro. Opened in 1949 as a trolley station, the 75,000 square feet of underground platforms and tunnels were closed off in 1962, when the city’s streetcar system shut down. Other than brief stints as a fallout shelter in the late 1960s and a short-lived food court in the mid-1990s, the cavernous space has remained empty — until Dupont Underground reclaimed it to offer D.C. a new venue for creative expression.

This is now a place you will want to spend some time exploring. After trekking down a set of stairs next to Starbucks, visitors find themselves in a darkened series of tunnels that now serve as a spot for art installations, fashion shows and dance parties.

And there’s another addition to Dupont Underground’s programming lineup this year — it’s the newest, and most exciting, spot for theater in Washington.

“Above Dupont Underground, it’s a gathering place for protests and civil unrest,” Galbraith said. “And while we were rehearsing, we could hear them, and the motorcades coming up Mass Avenue — we’ve incorporated all of that into the show.”

The aptly chosen one-act play “Protest” by Václav Havel, the playwright and political dissident who became the Czech Republic’s first president after the Velvet Revolution, was the first piece staged underground. And it all came together because of a collaboration between the theater, the Dupont Underground organization and the Czech Embassy.

“This is what we usually do in Europe — if we have an abandoned space in the center, we usually redo it and make it into a public space because it brings a new quality to the art,” Pavla Veličkinová, the head of the embassy’s public diplomacy department, told The Washington Diplomat. 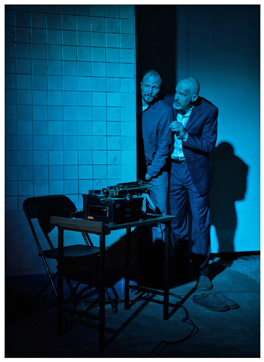 The Alliance for New Music-Theatre, the “theater in residence” for Dupont Underground, presented “Protest” in May, in partnership with the Czech Embassy. Veličkinová commissioned the play last year in honor of the 80th anniversary of Havel’s birth. The theater group initially staged the play last year as an “apartment performance” at the ambassador’s residence, in honor of the play’s origins, before deciding to put it on in the unique space in Dupont.

Dupont Underground’s labyrinthine location also pays homage to how the play was initially staged, with Havel and other artists banned by the communist regime going “underground” and putting on their plays in apartments. “Protest” is a sly commentary on totalitarian rule that pits Havel’s alter-ego Ferdinand Vaněk, a dissident, against a one-time idealist who has settled into the system. It’s a play, Veličkinová noted, that is about “how many faces freedom has — it’s all about people’s freedom.”

“And Dupont Underground is such a natural space for this play,” she said. “When I visited before, I remember the ceiling, black with dirt. But you could see the potential.”

It is truly a distinctive, memorable space for theater. Below bustling Dupont Circle, in the midst of D.C.’s diplomatic zone, Dupont Underground feels decidedly unlike anything else in Washington.

And now, with the Alliance in residence, Dupont Underground has expanded its repertoire to the theater world.

“For such a large tunnel space, they’ve made a really intimate space for theater,” she said

The very nature of the space seems to imbue everything on display with an inherently subversive vibe, a perfect fit for “Protest.”

The space is still in its infancy — the theater only got more than minimal electricity four days before opening, for instance, and there are no bathrooms, although they have an agreement with a local hotel. And, of course, there was no stage. Both the stage and the box office are on wheels, able to move along the trolley tracks if need be in the future.

And there’s more change afoot in the future. Kassewitz said Dupont Underground is raising money and looking to expand.

“We’re constantly focusing on ways of bringing multicultural platforms down here — artists, plays — while still fundraising for the long-term vision of the space,” she said. “We want it to be like the Serpentine Galleries in London. We’re a long way from that, but the strides are being made.”

Although there have been plenty of challenges thanks to the space’s unique qualities, that was part of the appeal, Galbraith said. “I said, ‘Let’s keep it raw.’

“There’s lots of underground theater abroad,” she said, adding that “the most urgent theater has often been in found spaces” like Dupont Underground.

“Protest” was just the start for the theater’s work in Dupont Underground and marked another significant collaboration with the Czech Embassy. The May production was the fourth time the theater company partnered with the embassy, and there is more to come.

In October, the Alliance will put on “R.U.R: A Retro-Futuristic (Cabaret) Musical” based on Czech writer Karel Čapek’s science fiction play that introduced the word “robot” to the English language.

“We’re quite a team,” Galbraith said of her work with Veličkinová and the Czech Embassy.

The artistic company is interested in cultural diplomacy, Galbraith said, and that is reflected in the other upcoming performances coming to Dupont Underground.

In January, “Women of Troy/Voices from Afghanistan,” a re-working of Euripides’s anti-war play set in contemporary Afghanistan, will be staged in collaboration with the Embassy of Afghanistan, Galbraith said. Another upcoming production will be “On the Road to Arivaca,” a chamber opera that will feature a children’s choir telling the story of immigrants coming across the border.

Going underground to the theater is set to be one of the big changes to D.C.’s cultural calendar in the coming months. And, as Galbraith said, “It’s because of the Czech Embassy and Havel this whole thing has been launched.”