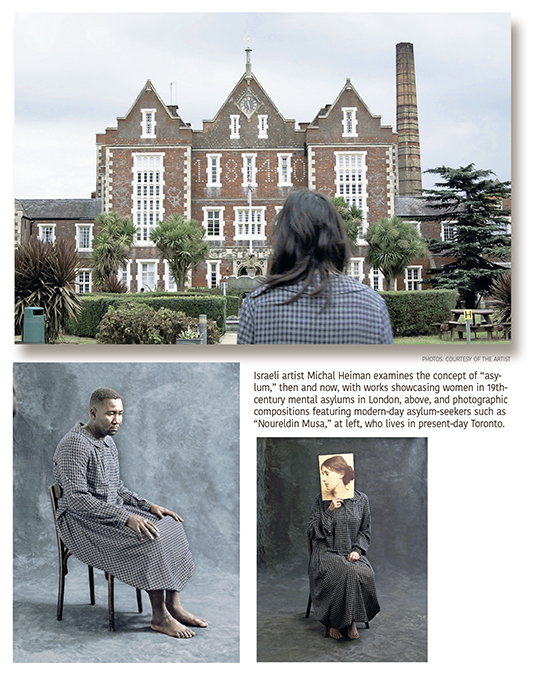 Israeli artist Michal Heiman offers two very different takes on the term “asylum.” On the one hand, she depicts women who were locked up in 19th-century mental asylums in London and Venice; on the other, she explores the pressing modern-day phenomenon of desperate people seeking asylum in other countries.

One form of asylum denotes prison and captivity, while the other is associated with sanctuary and freedom. Her work spans gender, race and time. But the unifying theme in “Radical Link: A New Community of Women, 1855-2020,” Heiman’s exhibition at the American University Museum, is a multimedia focus on those who have suffered at the hands of racism and misogyny. And, of course, there is an element of wanting escape, whether it’s from a 19th-century insane asylum or a 21st-century war-torn nation.

According to the museum, the exhibit is Heiman’s way of extending “solidarity to those who engage in acts of resistance by creating a new community through her photographic practice.”

Heiman, who works with photographs, film, sound work and archival documents, is based in Tel Aviv, teaches at Jerusalem’s Bezalel Academy of Arts and Design and is a member of the Tel Aviv Institute for Contemporary Psychoanalysis.

“I am fascinated with her photographs, films and performances because they respond very pointedly to the history of photography and also consider connections among art, psychoanalysis and both mental and political asylum,” said Sarah Gordon, curator of the exhibition.

“Refugees and asylum-seekers are encountering incredible difficulties right now,” Gordon added. “Also, women’s rights are as important today as ever. Both of these issues are addressed in the exhibition.”

The overlap is both thematically and visually striking. Heiman specifically zeroes in on women who were brought to the Surrey County Asylum in London and the San Servolo Asylum in Venice. She also highlights contemporary asylum-seekers, artists, activists, gatekeepers and others who’ve faced repression in her efforts to create a “radical link” among her subjects.

To that end, Heiman creates poignant, simple portraits of people dressed in monotone plaid nightshirts — the kind you might see in an asylum — posing against a similarly bland gray-blue backdrop. Their facial expressions are subtle but vary from despondent, contemplative to quietly combative.

These subjects could represent people with mental illnesses who were hidden away from society over a century ago, or modern-day refugees sitting in a chair, as if waiting for an asylum interview.

The photograph of Noureldin Musa clearly depicts the latter, as the real-life asylum-seeker who lives in Toronto poses for Heiman, his face looking empty and emotionless, as if weathered and beaten down by life.

Other photographs show a clear overlap between past and present, as seen in a piece where the subject holds an aged sepia photograph of another woman over her face. Yet another woman holds a photographer of author Virginia Woolf, a nod to Heiman’s focus on women breaking gender norms.

The exhibition also features stills and films of interview setups, complete with tables and microphones, including some of Heiman herself, who was in residence at the museum until Nov. 16.

A prominent advocate for women’s rights, Heiman has also tackled the issue of non-Jewish refugees to Israel, mainly from Africa, and the contentious debate over who has the right of return to the Jewish state.

“The work can be understood in relation to the history and culture of Israel-Palestine but also, on a larger scale, it asks questions about what it means to seek and grant asylum, how institutional spaces and structures can subjugate individuals and how we can offer the possibility of sanctuary,” Gordon said.

“The subject matter is powerful and may be challenging, but it is also beautiful and provides ideas for offering solace and creating community.”

Gordon said she hopes the experience will be moving, especially for visitors who are able to take the time to see the films — some are as short as two minutes, others as long as 20 minutes.

She was inspired to curate the exhibit while writing her book, “Indecent Exposures: Eadweard Muybridge’s ‘Animal Locomotion’ Nudes,” when she came across a work that Heiman made in response to a Muybridge photo. Gordon then wrote to the Israeli artist to see if she could add that work to her book. The following year, Heiman wrote to Gordon about her latest project and that started the collaboration between the two women.

“Radical Link” is the first U.S. museum exhibit for Heiman. The works demonstrate the AU Museum’s commitment to Israeli art, as evidenced by the Rothfeld Collection of Israeli Art and the recent acquisition of 62 works by Israeli artists from the collection of Nancy Berman and Alan Bloch.