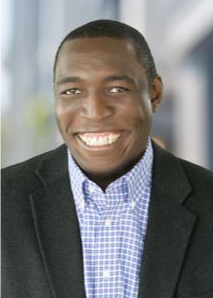 When Billy Ekofo left his family in the Democratic Republic of the Congo 17 years ago, he never imagined that the next time he’d see them would be on a stage in San Francisco where he was aptly giving a talk titled “Speak the Possible into Existence.” But that’s what happened Aug. 4, when he was reunited with his mother, father and younger brother.

“I believe that when you see a person, you see that which is possible, and when you see the possible, you see life itself,” Ekofo had said not long before his wife walked on stage with his estranged parents and brother.

Let’s start at the beginning. Ekofo, director of leads management at Century 21 Redwood Realty, was born in 1981 in Indianapolis, Ind., to Congolese parents. Ekofo’s stateside birth is the pivotal part of this story, even if almost two decades passed before anyone realized it. His birthplace made him an automatic U.S. citizen, although he would have no real connection to the country until he was nearly an adult. “I was just an American on paper, but Congolese by everything else,” he said.

That’s because his parents moved soon after his birth to France so his father could attend graduate school. Two years later, they settled in the Congo.

In the mid-1990s, violence erupted in the region in the form of the Congolese Civil Wars. Ultimately, the fighting would involve nine African nations and kill an estimated 5.4 million people. The U.S. Embassy made sure Ekofo wasn’t one of them.

In 1998, U.S. citizens were being evacuated from the Congo, and embassy officials knocked on Ekofo’s door in Kinshasa to say he had one day to prepare for a trip to the United States. He packed a single duffel bag with clothes and school report cards and carried some money and the phone number of a family friend, Etienne Bote-Tshiek, who had immigrated to Virginia some years earlier.

It took Ekofo two and a half weeks to snake his way through two stops in Cameroon to Brussels and then Paris before arriving in New York City. He slept in the airport there until his flight to Richmond, Va. On arrival, he picked up a pay phone and hoped for the best.

The friend didn’t know Ekofo was coming. “I had some change in my pocket from what was left over from my travel and I shoved every coin into a payphone,” he said. Someone picked up the phone in the friend’s office at 5:45 p.m. on a Friday and realized the young man speaking French into the line probably needed to speak to Bote-Tshiek.

He picked Ekofo up and took him to his home in Newport News. Ekofo spent a couple weeks getting his identification and Social Security cards in order. He also called his family. “Bear in mind that this entire time I was traveling they had actually no idea where I was,” he said. 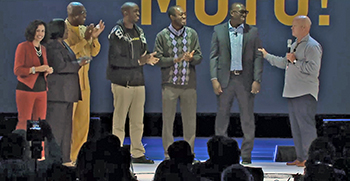 Century 21 Redwood Realty’s Billy Ekofo, pictured second from right and in the top photo, is reunited with his Congolese family after 17 years during a talk he held in San Francisco.

Once Ekofo was on his feet, Bote-Tshiek, whom he called “Papa Tshiek,” asked him to move along. He found him a spot with a coworker who had an extra room in Norfolk. And again, Ekofo packed his bags. In the end, Ekofo lived with two American host families in Norfolk, graduated from high school and then left again to attend Hampden-Sydney College, where he studied economics and minored in French.

He graduated in 2004 and took a job as an international student adviser at a private university in the Norfolk/Virginia Beach area before going into media production. In 2011, he enrolled in business school at the College of William and Mary and earned an MBA in 2013. By then a family man, he moved his wife and children to Manassas in hopes of finding work in D.C. with an NGO or nonprofit. After he came up empty for six months, his father-in-law helped get him a job at Century 21.

That intervention, too, proved fateful because it was Century 21 Redwood executives Eddie Berenbaum and Bran Inman who were so moved by Ekofo’s story and his commitment to the company that they decided to give something back to Ekofo: his family.

“We had this idea: What if we gave back to Billy — somebody that spends so much of their time giving back to others?” Berenbaum said in a video about the reunion.

And so Ekofo saw his mom, dad and younger brother for the first time in 17 years this summer. His sister was in the late stages of pregnancy and couldn’t make the trip, and his older brother had come to the U.S. for Ekofo’s 2006 wedding and changed his immigration status then. He lives in North Carolina.

Ekofo’s family spent about a month traveling, seeing the sights in D.C. and meeting the coworkers who brought them here.

But “most of the time we just hung out,” Ekofo said, getting to know one another again. “It was special.”

His parents returned to the Congo in mid-September. “My parents felt compelled to go back,” he said, largely because of his sister. But his younger brother, 22, remained and Ekofo is working to change his immigration status so he can stay. He also hopes to bring his parents, sister and her family here in the near future.