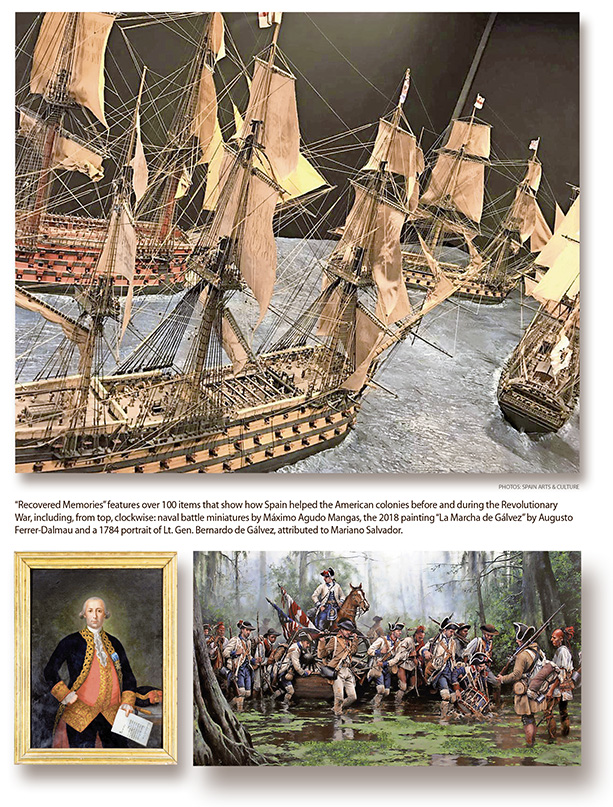 The American Revolution is often seen as a war between an upstart U.S. nation and a British superpower. But the war, in fact, was a global conflict, in which countries like France and Spain aligned with the American colonies to get back at the Brits.

France’s contributions to the war effort are well known — the American Revolution formally ended in September 1783 with the Treaty of Paris and France’s status as a modern power was reaffirmed by the war, although it cost the country a great deal of money.

Spain’s role was also integral to the U.S. victory but is perhaps less well known — which is why the Spanish Embassy, as part of its Spain arts & culture program, is highlighting the country’s involvement in the exhibition “Recovered Memories: Spain and the Support for the American Revolution.”

“Little is known about Spain’s role in the American Revolution and we hope guests can learn more about Spanish contribution to the founding of the United States,” said María Molina, head of the Cultural Office at the Embassy of Spain. “Spanish figures such as Bernardo de Gálvez and Diego de Gardoqui played a crucial role in the independence of the United States.”

Like France, Spain declared war on Britain and allied with the American colonies in part to weaken Great Britain, which had inflicted substantial losses on Spain during the Seven Years’ War. Spain provided supplies and munitions to American forces, notably assisting French and U.S. troops in the 1781 Siege of Yorktown, the critical and final major battle of the North America theater. The French sent a desperate appeal to raise money for the Continental Army to help in the fight at Yorktown. François Joseph Paul de Grasse, the French admiral designated to assist the Colonists, joined Spanish agent Francisco Saavedra de Sangronis to get the needed cash, over 500,000 in silver pesos, which they raised in Havana within 24 hours.

“Recovered Memories” showcases Spain’s support for the American colonies both before and during the Revolutionary War. Spanish historical figures are also highlighted, as are Spanish-American relations, beginning with Spain’s Age of Enlightenment and ending with 20th-century technological advancements.

The exhibit displays over 100 diverse pieces, including documents, works of art, period clothing, musical instruments, maps and even holograms.

“Some of the highlights of the exhibition include ‘Gálvez’s March: Mississippi, Baton Rouge and Natchez, 1779,’ painted by Augusto Ferrer-Dalmau,” said Molina, noting that the piece “shows the Spanish hero crossing the Mississippi [River] with his army.”

There’s also a bust of George Washington believed to be commissioned by Spanish Prime Minister Manuel Godoy to commemorate the signing of a treaty that defined the borders between Spain and the U.S. in North America, Molina added.

Other noteworthy additions include a model of a ship that played a part in the capture of Pensacola, Florida, and a reproduction of a portrait of Bernardo de Gálvez (the original is in the Capitol). Gálvez’s actions in the southern U.S. were key to helping the Continental Army defeat the British.

The pieces hail from museums, libraries and institutions from around the world, including the Louisiana State Museum and the National Museum of Natural Sciences of Spain.

While a lot of space is devoted to the military actions of Spain, a large part pays homage to the diplomatic mission of John Jay, a former president of the Continental Congress who was appointed America’s envoy to Spain and tasked with drumming up Spanish support for American’s revolution.

Spain not only had an impact on the Americas and Europe, but also the Mediterranean, Africa and Asia as well.

“As a result of this influence, Spanish is the second most widely spoken language in the world,” Molina noted.

Recovered Memories: Spain and the Support for the American Revolution