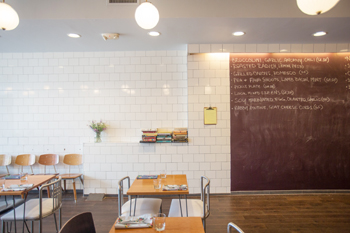 It’s been more than a decade since the District of Columbia launched its much-hyped revitalization of the H Street corridor in the northeast section of the city.

The constantly changing menu at Sally’s Middle Name
is written in erasable marker on the walls of the small,
simple eatery on H Street.

Although the return of streetcars to H Street has been beset by delays, 10 years into the major urban renewal project, the long-dilapidated thoroughfare has come a long way as a nightlife hub, with a slew of bars, beer gardens and music clubs catering to eclectic tastes. But until recently, H Street has remained a ho-hum dining destination. A couple of important restaurant openings in the past six months have helped turn H Street into not only a fun place to party, but also to enjoy a daring, flavorful meal.

When Maketto — an Asian-inspired restaurant, bar, coffee house and retail space — opened in April, it immediately became the hippest spot in the corridor and one of the best places in the city for a culinary adventure.

Chef Erik Bruner-Yang, nominated as a “rising star” by the James Beard restaurant awards this year for his Toki Underground ramen hotspot, is the driving force behind Maketto, as well. There’s no question Bruner-Yang’s multipurpose, 6,000-square-foot Maketto is trendy. Underground D.C. rapper Yung Gleesh flowed softly from the stereo as we sat down and a server in a Dillinger Escape Plan concert t-shirt took our order. But the establishment’s airy design and friendly employees help keep it real.

Maketto describes itself as “Cambodian and Taiwanese cooking inspired by the people and flavors of their cultures.” The simplicity of that description belies a complexity of flavors originating from the polished steel kitchen of Maketto’s James Wozniuk, the chef de cuisine.

We started with one of Maketto’s signatures, pork steam baos, or buns. Two plump white orbs of baked dough arrived fresh, piping hot and glistening alongside a dollop of hoisin sauce. Texturally the buns were a big winner, soft on the inside with a slight firmness outside, and the piquant shredded pork tucked into the buns was tangy and tasty. A dollop of hoisin sauce on the side offered a sweet and salty — too salty, in this diner’s opinion — contrast to the pork. If you like carbs, this is your dish.

Next, shrimp crudo wrapped in mint leaf and topped with flecks of salt-cured duck egg and a spicy pounded fish with a savory coconut milk dipping sauce on the side was a confounding, but deeply palate-pleasing, adventure. The menu says simply “shrimp crudo with mint,” or raw shrimp with mint, so unless the diner asks in advance, he or she won’t really know what they are getting into.

When the plate arrived, I suspected the little bits of duck egg were some kind of white cheese and the spicy pounded fish was peanut sauce. I was wrong on both counts, the chef informed us. But both ingredients brought an immense flavor to the delectable bites. We’ll also confess to using a spoon to lap up more of the citrus-infused coconut dipping sauce than was probably necessary. 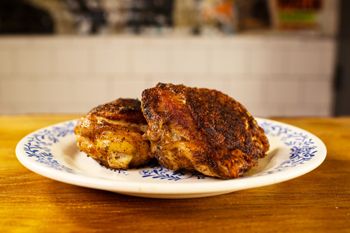 Chef Sam Adkins, who earned his culinary bona fides at such established eateries as Cashion’s Eat Place in Adams Morgan and Jackie’s in Silver Spring, is now serving up inventive, fresh dishes at Sally’s Middle Name.

The chicken soup is also a solid bet. The steaming bowl arrived with a leg and thigh of chicken attached to each other — and no knife. Since I didn’t want to end up wearing the hot soup on my shirt, we asked the kitchen to carve it up, which they happily and promptly did. Then we got down to business. The soup was, well, chicken soup, but elevated mightily with chunks of perfectly cooked, earthy okra and tart slivers of lemongrass.

The fried oyster served with egg omelet again showcased Maketto’s adventurous bent. A half-dozen lightly fried mollusks accompanied with a creamy cooked egg and draped in a spicy tomato-based sauce transported us straight to a food cart on the streets of Phnom Penh. Well done, Maketto.

Across H Street at Sally’s Middle Name, chef Sam Adkins, who earned his culinary bona fides at such established eateries as Cashion’s Eat Place in Adams Morgan and Jackie’s in Silver Spring, is also serving up inventive, fresh dishes. Aesthetically, the small restaurant is a cool wash of spare white tile punctuated by a dark wood floor. No menus here. Everything you need to know about the dishes is written in erasable marker on the walls.

Adkins knows what time it is — summer — and many of his dishes reflect the glories of the season. In fact, while Sally’s Middle Name is not technically a vegetarian restaurant, it would rate high on any herbivore’s list of excellent dining options in D.C. Adkins’s concept is a limited menu of mostly small plates, with a few larger ones mixed in.

We ordered most of the menu and still had room for dessert. We’re glad we did, but the kitchen had some serious pacing problems. The dishes piled up on our small table, and we definitely felt rushed as some of the hot food cooled. But we’ll chalk that up to an admittedly inexperienced server and hope it’s not the norm.

With that quibble out of the way, let’s get to the food. The cucumber soup arrived first and it was a near-perfect antidote to a warm, muggy evening. Chilled with a dollop of yogurt, the soup was the embodiment of summer with a little vinegar zing. My dining companion likened it to a fresh, liquid salad. 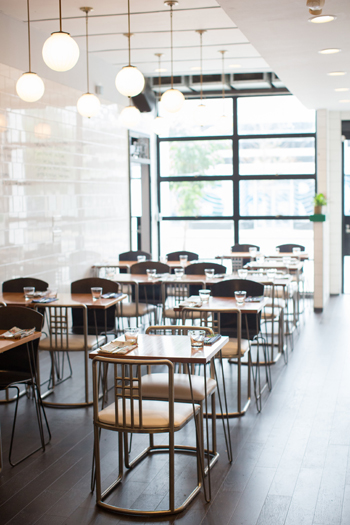 A carrot salad served with green harissa — a combo of jalapeno, cilantro, parsley and cumin — was less zesty than it sounded, but the carrots, again, had a fresh flavor and pleasing al dente crunch.

The pickled and fried Swiss chard stems — quickly becoming a signature dish at Sally’s — were a revelation. When most of us think chard, we think dutiful, healthy and maybe even blah eating. But this isn’t your yoga instructor’s chard. These fresh stems are lightly battered in beer, flash fried and served with a side of homemade buttermilk dressing. And they’re out of this world. Searing hot with a light crunch, this chard dish could have you rethinking the trendy health food’s potential.

Roasted tomatoes with Romano beans and basil were also outstanding. Thick tomato slices, blackened on the edges and flecked with pieces of fried garlic, were the embodiment of everything you typically can’t find in a store-bought version of the red fruit. Meanwhile, perfectly grilled, generous chunks of summer squash drizzled with a spicy olive oil and dotted with fresh basil kept the seasonal party playing out on our grateful taste buds.

Grilled salmon atop an ember-roasted eggplant puree delivered a welcome blast of protein to the meal and hit every possible right note. The thick chunk of pink fish had a tasty char and the roasted eggplant came with a welcome roar of mustard fire.

We finished with a melon and nectarine salad, served as a dessert of sorts, with chunks of hazelnut and thin slices of jalapeno topping off the dish. The pepper heat injected a lively contrast to the sweet, juicy slices of nectarine and left us satiated.

Inventive, ambitious restaurants are springing up all across Washington these days. The additions of Maketto and Sally’s Middle Name put H Street right in the middle of the action.