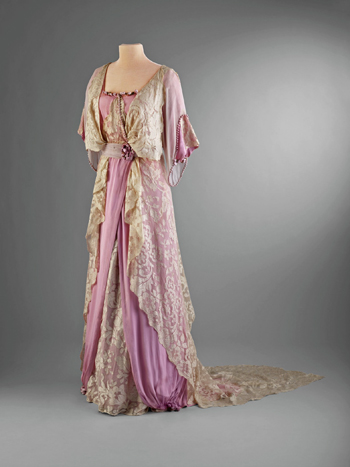 When most Washingtonians hear the name Merriweather Post, they likely think of the namesake concert venue in Maryland where they spent the summer lifting their phone screens to the live performances of Mumford & Sons, Sam Smith and Florence and the Machine.

Yet Marjorie Merriweather Post was hardly one to don a concert t-shirt. One of the tastemakers of the early 20th century, the heiress to the Post cereal empire and founder of General Foods was followed relentlessly by the press, who were desperate to snap photos of her high fashion wardrobe.

“They would show what she wore to every event,” said Kate Markert, executive director of Hillwood Estate, Museum and Gardens. “There were even sketches of new outfits.”

Hillwood was Post’s home on Linnean Avenue, NW, a sprawling Georgian estate that now functions as a museum for her art collection, her gardens and for the woman herself. In addition to the rare French and Russian decorative arts and handpicked furnishings on display, a new exhibit, “Ingenue to Icon: 70 Years of Fashion,” features the striking designs and sumptuous fabrics that made Post a trendsetter.

Much of her closet and jewelry box is on display for the public to admire. And as Post would certainly be transitioning her wardrobe as the summer air cools in D.C., the museum soon plans to switch out the exhibit in favor of fall attire. “We will be changing over from spring and summer fashions, which we’ve been showing since the show opened in June, to fall and winter beginning Oct. 1,” said Markert. “We have so many great dresses that we will be essentially installing an entirely new exhibition for the second half.” 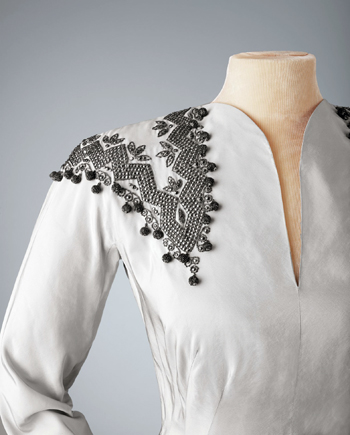 The dresses in particular speak to a much larger story than just the change in seasons. Rather, the collection is a window into the changing political and social climates as the century wore on, beginning in the 1910s.

“I love the suffragette suit,” said Angie Dodson, co-chair of Hillwood’s exhibitions and director of learning and engagement programs. “It offers us such a great window onto such a fascinating moment in history, for women and for the world.”

Dodson said Post’s outfits reflected the changing times, from the women’s voting movement to the Roaring ’20s and beyond. “When you see that [suffragette] dress alongside the Edwardian confections, the flapper fashions, the Hollywood glam, you begin to appreciate how much societal change and really significant shifts Marjorie experienced.

“I love the Madeleine et Madeleine dress from 1921,” Markert added. “The asymmetrical hemline, the multiplicity of fabrics, the new freedom of movement that you see in the ’20s.”

Dodson admits she also can’t resist the aesthetics of Post’s party costumes. “I find the evening gowns from the 1930s, like the pair of strappy silk taffeta ones, especially the fern-printed one with the red, obi-like bustle, to be so delicious.”

But Post’s attention to fashion was about more than playing dress-up. Her social position in Washington and immense wealth was a role she took seriously. During her second marriage to financier E.F. Hutton, she helped transform her family’s cereal company into a pioneering frozen food conglomerate. During her third marriage to Joseph E. Davies, U.S. ambassador to the Soviet Union in the 1930s, she became an avid collector of Russian art and honed the skills that would later make her a key player in political and philanthropic circles back home.

Hillwood devotes a special section of the exhibit to Post’s wardrobe in this chapter of her life, called “Sartorial Success at Home and Abroad,” which is a stylish lesson in keeping warm, not just in the harsh cold of her new country, but also in relationships with her home country. “Being an ambassador’s wife represented a turning point in Marjorie’s approach to fashion,” said Dodson. “Knowing she was to represent her country abroad, she sought out designers working in the U.S. to create her clothes, accessories and jewels.”

Post perfected the role of hostess at the embassy in Moscow, where she developed a love of Russian imperial decorative arts, including Fabergé eggs. After her divorce from Davies, Post returned to the U.S. to purchase Hillwood, where she spent the remainder of her life hosting legendary parties for Washington society. Her love of clothing and jewelry continued, serving as a fashion diary as the decades wore on. The entries on display range from a Marie Antoinette headdress to a costume inspired by Vincent van Gogh’s “Starry Night.”

While Markert revels in the fine detail of Post’s high-quality, tailor-made clothes, she appreciates the fashion mostly as a well-preserved timeline of women’s history. “You can come away with an understanding of the changing roles of women through most of that century, as showcased by this one high-profile person, who just happened to be a great curator and archivist of her own life,” she said.

Dodson takes it one step further, calling the collection an “arc of life.”

“We might not all dress like Marjorie Post, but we do dress,” she said. “And our choices say a lot about us, every day. In this way, we can all find something of ourselves in this story. We can see our own stories set against the backdrop of history.”

Ingenue to Icon: 70 Years of Fashion from the Collection of Marjorie Merriweather Post