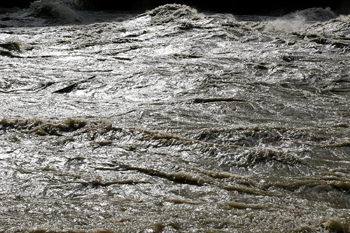 Photos: Courtesy of the artists

In the Cauca River of Colombia, the bodies of murder victims sometimes get stuck as they float down the river — their identities anonymous and the stories of their demise often washed away in the water. At the same time, Colombia’s waterways, like those in other nations, serve as the commercial, transportation and social lifeblood of their local communities.

In a country that has struggled to find peace and prosperity after decades of drug trafficking and a violent guerilla insurgency, the rivers of Colombia have their own stories to tell — at times dark and other times beautiful, but always raw and unfiltered. In a new exhibition at the Art Museum of the Americas, “Waterweavers: The River in Contemporary Colombian Visual and Material Culture,” curators José Roca and Alejandro Martín aim to capture the role of the river in Colombia as both an area of conflict as well as a source of creativity.

“I wanted the viewer to see the beauty and cultural complexity of the rivers and the peoples that live alongside them, but also understand the difficulties they face,” said Roca. “Exuberance, beauty and culture alongside drug- and politically related violence.” 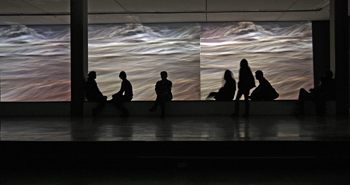 The beauty and menacing undercurrent of Colombia’s rivers are depicted in such works as Clemencia Echeverri’s “Treno”.

With Colombia’s rugged topography — inaccessible mountains and unexplored jungles — waterways are often the only modes of transportation between remote areas and cities, connecting yet dividing the people in these areas. Using the river and the act of weaving as a platform to examine the intersection between design, craft and art, as well as between nature and art, “Waterweavers” showcases immersive environments on the exhibition’s walls that surround 3-D pieces displayed in the center of each room. The exhibition features 17 artists and more than 50 Colombian drawings, ceramics, graphic design, furniture, textiles, video and installations that touch upon two themes: rivers and weaving.

“It just so happened that these works brought forward issues such as … natural beauty, local traditions and myths, but also fragility and conflict,” said Roca. “The curatorial process was in itself a form of weaving known and unknown threads.” 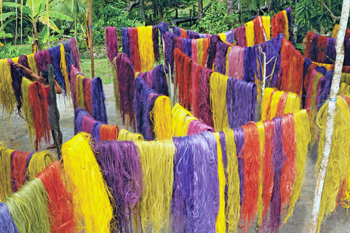 In Susana Mejía’s “Color Amazonia” — the result of seven years of research on the natural pigments found in Colombia’s Amazon rainforest — the colors are dazzling. The display of dried paper and fique fibers naturally dyed in rich earth tones dangles over visitors’ heads. It is the culmination of Mejía’s time spent with indigenous women, learning the local practice of extracting color from plant bark, leaves, fruit and sap.

A different interpretation of the same river is shown in Alberto Baraya’s “Río (River)” video. The short clip depicts a murky river set against the reflection of clouds overhead, with the only sound in the background coming from birds chirping. All of a sudden, the viewer is jarred as the stillness of the river and the overall scene are disturbed by the emptying of rifle bullets into the water. Baraya, who filmed the scene from a rooftop, was showing a practice drill by local marines who patrol the river. While routine, the brief explosions illustrate the unsettling undercurrent of life along the river and how the tranquility can be shattered in mere seconds — an all-too-familiar reality in certain parts of Colombia.

Similarly, in Clemencia Echeverri’s video installation “Treno,” a double screen shows the routine ebbs and flows of activity along the Cauca River, pierced by sudden screams that echo from a distance. Colombia’s second-largest river, the Cauca holds its own secrets as the preferred dumping ground for those caught up in cartel battles. 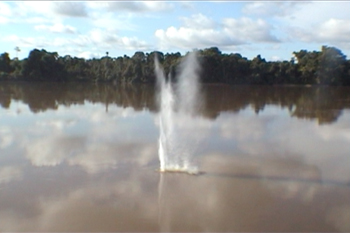 Other works in the exhibition explore the more creative, lighter side of Colombian life, including Ceci Arango’s “Corocora stools” and “Cucarachero poufs,” which highlight the traditional weaving practices of the Guacamayas community. When looked at from afar, the stools resemble the corocora, or scarlet ibis, a beautiful bright red bird commonly found in Colombia.

Marcelo Villegas’s chairs work with the natural shapes and curves of the materials he uses rather than trying to sculpt the form unnecessarily. The resulting “furniture,” which features the unique texture of the bamboo root, resembles a living creature that may be found in the wilderness. Fittingly, Carol Young’s “Memoria” is an installation of long ceramic sheets that have been rolled and stacked on top of one another, showing how material deposited by rivers preserves memories and history.

While “Waterweavers” subtly addresses difficult topics from Colombia’s not-so-distant past, the curators want the exhibition to be absorbed rather than overanalyzed. As such, the display contains no explanatory text to distract from the sensory experience. Words aren’t needed, though, because the emotion flows throughout the art, just above the surface.

Waterweavers: The River in Contemporary Colombian Visual and Material Culture