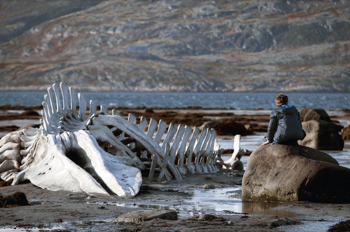 Also See: ‘The Duke of Burgundy’ and ‘Paddington‘ and Repertory Notes

Sergey Pokhodaev stars as Roma in Russian writer-director Andrey Zvyagintsev’s “Leviathan,” about an everyday man’s struggle against a powerful bureaucracy.

As the 2015 Academy Awards ceremony quickly approaches, Russia’s “Leviathan” can certainly be considered one of the frontrunners for the Best Foreign Language Film Oscar, especially after capturing the Golden Globe for Best Foreign Language Film. The masterpiece from Russian writer-director Andrey Zvyagintsev (“The Return,” “Elena,” “The Banishment”) paints a searing picture criticizing modern Russian society, particularly the corruption of the state and the Orthodox Church.

The title “Leviathan” references the fatalist philosophical tome by Thomas Hobbes and i loosely based on the Biblical tale of the Book of Job. Zvyagintsev and Oleg Negin’s well-crafted script depicts the sinister machinations that cruelly control the fate of an everyday person, who cannot hope to win against The Man. Yet the film’s story is not constantly a downer, as the dark tone is frequently leavened by strong doses of humor.

On the outskirts of a northwestern Russian fishing village by the Barents Sea, working-class mechanic Kolya (Aleksey Serebryakov) runs his vehicle repair business on a remote property. His hilltop waterfront lot also holds the house that he built with his own hands. A chronic complainer and drunk, he resides with his surly son Roma (Sergey Pokhodaev), who resents his stepmother Lilya (Elena Liadova), Kolya’s pretty, younger second wife. All three of them are unhappy with their life, which they show in different ways.

Meanwhile, the town’s boorish mayor, Vadim Shelevyat (Roman Madianov), covets Kolya’s land to build his own grand mansion. Vadim is sleazily employing the municipal power of eminent domain to seize Kolya’s property for a pittance of its worth. Fortunately for Kolya, his old Army buddy Dimitri (Vladimir Vdovitchenkov) happens to now be a sophisticated attorney practicing in Moscow.

The big-city lawyer visits the provinces to defend Kolya in the final appeal of his legal battle against Vadim. When Dimitri’s legal arguments fail to sway the judges already in the mayor’s pocket, he resorts to blackmailing Vadim with a dossier of dirt he has dug up. The evidence is condemning enough to threaten Vadim, who calms down enough to ratchet up the cutthroat hardball against Kolya and his circle.

A strong ensemble cast delivers punchy performances to solidly inhabit their characters, while Zvyagintsev’s steady direction takes its time to unspool the proceedings, allowing the harsh details to slowly seep into the world on screen. The bleak subject matter is juxtaposed in sharp contrast against a picturesque natural landscape beautifully lensed by Russian director of photography Mikhail Krichman. A powerful score by legendary American composer Philip Glass bookends the motion picture, which has earned critical praise from just about everyone except Russia itself, where officials have panned the movie for sullying the country’s image. That likely won’t stop the plaudits — and possibly awards — from streaming in. 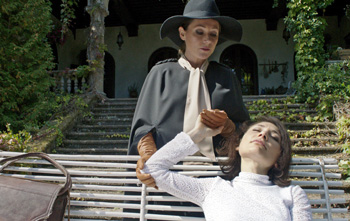 British writer-director Peter Strickland’s glossy third feature film, “The Duke of Burgundy,” promotes him into a higher league of filmmakers. His first two features, “Katalin Varga” and “Berberian Sound Studio,” were genre reworkings with modest budgets and distribution, though no doubt accomplished and acclaimed in a number of quarters.

The relatively restrained acting by the all-female ensemble cast, particularly the two leads, Italian actress Chiara D’Anna (who played in Strickland’s “Berberian Sound Studio”) and Danish actress Sidse Babett Knudsen, conveys significant emotions with often minimal movments. Yet they are having fun playing their characters, and the audience is deriving plenty of pleasure from watching their actions.

The film opens with a classic 1970s nature shot: A young woman (D’Anna) lounges at the edge of a stream before taking a bike ride. She ends up at a mansion, where we learn she is Evelyn, the new housekeeper serving the middle-age lady of the house, lepidopterist Cynthia (Knudsen). In what initially seems to be a power paradigm not atypical in a British period piece, the older woman cruelly bosses the younger woman around, who is excessively punished for her mistakes.

The two lovers’ relationship then delves into sadomasochism, which is eventually revealed to be role playing that is repeated the next day. As time progresses, it becomes less evident who is dominant and who is submissive. What is definitely true for both parties is that the same old role play has grown tiresome and is no longer the turn on it was originally. 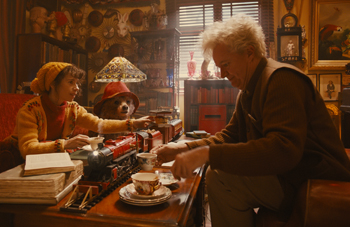 “Paddington,” from British helmer Paul King (“Bunny and the Bull,” “The Mighty Boosh”) and producer David Heyman (“Harry Potter,” “Gravity”), is one of the rare movies targeted to kids that is more than good enough for adults to enjoy. Overcoming significant public apprehension about the potential perils of a cinematic portrayal of the iconic eponymous talking bear, the film turns out to be a tasty treat for young and old alike.

Its solid foundation is a witty script co-written by King and Hamish McColl, based on Michael Bond’s popular children’s book series, first printed in 1958. The adapted screenplay successfully transposes the story to the modern era while maintaining its 1950s’ post-war British sensibility. King’s lively direction creates a boisterous world full of magical wonder and thrilling doses of danger.

In the vintage newsreel opening sequence, British explorer (Tim Downie) reaches the depths of Darkest Peru, where he cultivates special linguistic gifts and inherent appreciation for marmalade in a rare family of bears, telling them they would always be welcome in London. In contempory times, a young bear (Whishaw) lives happily in Darkest Peru with his Uncle Pastuzo (Michael Gambon) and Aunt Lucy (Imelda Staunton). While the lad is gathering oranges for marmalade, an earthquake destroys their home. Now tragically left on his own, he sets out for London to look for the explorer.

Alas, the young bear is roundly ignored upon his arrival at noisy Paddington Station. After the Brown family passes by him sitting alone and forlorn, Mrs. Brown (Hawkins) goes back to him. After hearing his story, she insists that he go home with the family over the objection of straightlaced Mr. Brown (Bonneville). As the bear is nameless, Mrs. Brown dubs him Paddington. The family seeks to help Paddington find the unknown British explorer who had offered his family a standing welcome mat. In the meantime, Paddington inadvertently and repeatedly wrecks havoc in the Brown household.

There are no Notes this month.