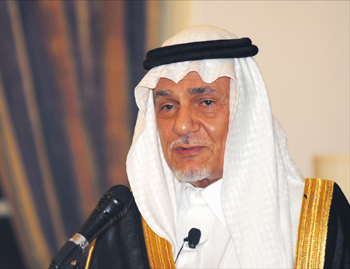 NEW YORK — Prince Turki al-Faisal, one of Saudi Arabia’s most influential and outspoken diplomats, says humanity is “criminally negligent” for not acting more forcefully to end the civil war in Syria, a conflict that since 2011 has claimed at least 250,000 lives and displaced half the country’s population.

Turki, a 70-year-old grandfather and son of the late King Faisal, headed Saudi Arabia’s intelligence agency for 24 years and served as Riyadh’s ambassador to the United States from 2005 until his retirement in early 2007.

On Nov. 3, Turki was the guest of honor at New York’s Yale Club, where he accepted the George H.W. Bush Global Leadership Award at a $500-a-plate cocktail reception and Q&A organized by Washington-based Layalina Productions, which seeks to bridge the divide between the Arab world and the United States.

“Some folks are saying unkind things about the Kingdom of Saudi Arabia,” lamented Leon Shahabian, Layalina’s president and executive producer, “but those of us in this room know the history of this incredibly important relationship. News cycles come and go, but this partnership is decades old, so we’re here to honor everything this bilateral relationship has done to benefit our respective nations and build for the future.”

In a videotaped welcome, the elder Bush said he’s proud to serve as honorary chairman of Layalina — an Arab film and TV production company — “because of my belief in the need to reach out” to the peoples of the Middle East.

“Today we stand at a crossroads: whether we will have a world of peace or a world of conflict,” the 41st president said. “The voices of reason and moderation need to be heard more clearly, and we all look forward to a time of decreased tensions.”

Yet today’s Middle East is anything but tranquil, as Turki sadly noted.

“If humanity looks at itself and considers what’s happening in Syria, we are all criminally negligent. Everybody is to blame,” he said bluntly. “It’s not just Russians or Iranians, but the Saudis and Americans too. Nobody is doing what is necessary to put a stop to the pain and sorrow the Syrian people have been going through these last four years.”

Turki, considered one of the most educated royals in the House of Saud, was born in Mecca, attended high school in Princeton, N.J., and graduated in the class of 1968 from Georgetown University’s Edmund A. Walsh School of Foreign Service (he’s also done post-graduate work at Princeton, Cambridge and the University of London).

After Faisal’s death in 1975, Turki and his siblings established the King Faisal Foundation to invest in education throughout Saudi Arabia. Since retiring from public office, the prince has headed the King Faisal Center for Research and Islamic Studies.

Cutler asked Turki if he had any glimmer of hope that peace would come to Syria.

“I am not optimistic at all,” the Saudi prince replied, shaking his head ruefully. “It’s been four and a half years, and as the carnage gets worse, everybody is just sitting back. All I see is political posturing — not any genuine and sincere dedication to ending the fighting. They talk about the Syrian people without consulting the Syrian people. We need someone in the world community to stand up and say, ‘Enough is enough.’”

He noted wryly that at the recent Vienna peace conference — which included 17 countries and marked the broadest effort yet aimed at ending the war — delegates issued passionate declarations of support for the Syrian people, but nobody offered solutions.

“The means are there, whether they’re military, economic or political. If the Russians, the Saudis, the Americans and the Europeans really wanted to put a stop to the carnage taking place in Syria, they can do that,” said Turki, whose government, considered the custodian of Sunni Islam, is deeply opposed to the presence of Shiite arch-rival Iran at those talks.

A big part of the problem, he suggested, is Iran’s continued support of Syrian President Bashar al-Assad.

“Nobody is willing to do what is needed to get over this crisis,” Turki said. “We cannot change geography by breaking the Arabian Peninsula off from the continent of Asia and heading for more peaceful waters. Iran will always be next to us. We have to deal with them whatever way we can.”

The other thing that can’t be changed, he said, is the simple fact that both predominantly Shiite Iran and staunchly Sunni Saudi Arabia are Muslim countries.

“We believe in the same God, the same Prophet and the same holy book, even though we have our differences on the lesser issues. But since the Iranian Revolution, [Ayatollah] Khomeini introduced a new heresy: the supremacy of the clerics to rule in Iran,” Turki said. “These historic links between Iran and the rest of us have been in trouble because of Khomeini’s belief in exporting the revolution. Iran’s continued interference in the affairs of Arab countries is the stumbling block for developing equitable and friendly relations.”

John Loeb, a retired U.S. diplomat and philanthropist, asked Turki why Saudi Arabia — arguably the richest, most powerful country in the 22-member Arab League and the one that has played a leading role in supporting Sunni rebels fighting Assad’s regime — doesn’t take the initiative in solving the Syria conundrum, suggesting that “if you took the lead, the United States would follow.”

But that’s exactly what Riyadh did, the prince countered — to no avail.

“From the beginning, the late King Abdullah tried to convince Bashar al-Assad personally — through emissaries and diplomatic meetings of the Arab League — to relent on his oppressive policy toward his own people, without success. So the kingdom and its partners in the Gulf Cooperation Council came to the U.N. Security Council with specific proposals for ending the fighting,” he explained.

“Unfortunately, the Russian and Chinese delegation vetoed those proposals, but the kingdom’s leadership was quite well known to the participants,” Turki said, adding that “the coalition now fighting ISIS [the Islamic State] in Syria was Saudi Arabia’s idea, and it came from a meeting in Jeddah attended by Secretary of State [John] Kerry.”

In fact, the United States has traditionally played the role of peacemaker, Turki pointed out, but under the Obama administration, Washington’s influence has waned.

“During the 1973 Ramadan War, which here they call the Yom Kippur War, Henry Kissinger took it upon himself — after some persuasion from the late King Faisal — to start a process of ending the fighting [between Israel and a coalition of Arab states]. And he did that, not simply because he was clever or more educated, but because he set his mind to it. And he galvanized support within the Arab world, and even in Israel, to put a stop to the fighting,” Turki recalled.

“When [Israeli Prime Minister] Golda Meir became obstinate and kept saying ‘no, no, no,’ Henry pushed and eventually we saw a change of government in Israel, and Mrs. Meir was replaced by a very personable, young politician named Yitzhak Rabin.”

Pausing for a moment to mark the 20th anniversary of Rabin’s 1995 assassination by a fellow Jew opposed to the Oslo peace process leading to a two-state solution, the Saudi prince said the forces of extremism are growing throughout the Middle East.

Yet the Palestinian-Israeli conflict, bad as it is, pales in comparison to the blood being spilled in Iraq and Syria at the hands of terrorists bent on establishing an Islamic caliphate in the Middle East.

“Let’s start by changing the name,” Turki suggested. “You call them ISIS or ISIL, giving it the semblance of being a state and being Islamic. It is neither; it’s more the symptom than the disease.”

The eloquent prince, who prefers to use the derogatory Arabic term Daesh to label the terrorist group, noted that “if there were healthy, functioning governments in Syria and Iraq, Daesh would not exist. It is the failed governments in both countries that allow Daesh to take advantage of the situation. So cure the disease in Damascus and Baghdad — and Daesh will disappear.”