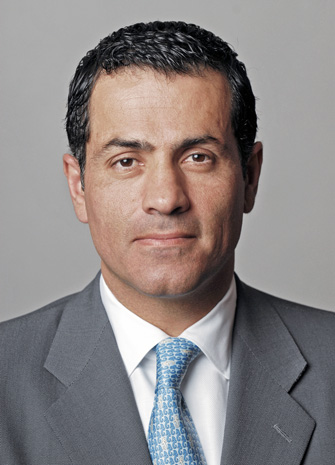 It’s no secret that Middle Eastern politics are complex, but when Vali Nasr speaks and writes, the tumultuous region suddenly makes more sense.

That’s why influential people ranging from President Barack Obama to “Daily Show” host Jon Stewart are listening to what the Iranian-born scholar and author has to say.

Whether briefing State Department officials on Middle East politics, penning an op-ed in the New York Times to warn of dangers lurking in the Arab Spring, or appearing on “The Charlie Rose Show” to discuss the Iranian nuclear threat, Nasr encourages people to base their perceptions of the Middle East on facts instead of often erroneous assumptions.

“My job is to bring the right facts and perspective to the overall policy discussion,” said Nasr, a former State Department official who now teaches international politics at Tufts University’s Fletcher School of Law and Diplomacy. “We are dealing with a very complex area of the world and our engagement has been increasing. Particularly after 9/11, we found out as a nation that we need to understand the Mideast a lot more. That [education] is ongoing with the Arab Spring.”

Fact-based decision-making is something that Nasr said he has always strived for, and he learned its importance firsthand working for legendary U.S. diplomat Richard Holbrooke, who died in December 2010 from a torn aorta. Nasr’s very first assignment under Holbrooke, who was the State Department’s special envoy to Afghanistan and Pakistan, was to write a memo on the Taliban’s operations in Pakistan. The next day, Secretary of State Hillary Clinton delivered Nasr’s memo to Obama, who reportedly agreed with Nasr’s assessment of the threat. It was a heady, validating experience.

“Holbrooke was unique in that he had an enormous respect for facts,” Nasr said. “He really believed you could not solve a problem unless you became an expert at it. He would make a point of traveling to the region once a month. He read everything he could on the countries that were assigned to him.

“He brought experts in because he believed you could not make policy unless it was informed by real knowledge,” Nasr continued. “If you were going to have a stint working in government, I would say he was the best person to work with because he appreciated positive input that was informed by on-the-ground reality.”

Perhaps Nasr’s single-greatest contribution to the ongoing dialogue on the Middle East is his understanding and explanation of the importance of sectarian rivalries. His 2006 book “The Shia Revival,” which explained how religious sectarian rivalries in Islamic countries could shape the future of the world, became required reading in the American diplomatic community and led to an invitation to brief President George W. Bush on the subject.

More recently, in late August, Nasr penned an op-ed in the New York Times that warned of the dangers lurking in the Arab Spring — specifically the notion that power vacuums could incite sectarian violence much like that in Iraq after Saddam Hussein’s fall.

“The Arab Spring is a hopeful chapter in Middle Eastern politics, but the region’s history points to darker outcomes,” Nasr wrote. “There are no recent examples of extended power-sharing or peaceful transitions to democracy in the Arab world. When dictatorships crack, budding democracies are more than likely to be greeted by violence and paralysis. Sectarian divisions — the bane of many Middle Eastern societies — will then emerge, as competing groups settle old scores and vie for power.”

Nasr told The Diplomat that he wants to make clear he thinks the Arab Spring is a positive development. But he also wants to tamp down expectations.

“There may be things that are right,” he said. “It’s the first time we’ve seen people in the region embrace values of peaceful protest and demand accountable, clean, representative government, rule of law, economic justice, and civil society engagement. All of these are positive things.

“We used to think that the only thing that moved people in the Middle East was religious fanaticism, anti-Americanism and jihad,” he added. “Now we’re seeing jihad lost to peaceful protest — for now. These are good things.

“The problem, I think, is that we’ve come to expect that the process of democracy is in a straight line and pretty quick,” Nasr continued. “Maybe when [Egyptian President Hosni] Mubarak fell from power it sort of redoubled our expectation.

“The road to democracy may not be quick and it may be meandering,” Nasr cautioned. “There may be many conflicts. Some countries are going to have a tougher time than others. For example, Egypt is a homogenous country. Syria isn’t. Syria has to deal with this legacy of minority rule and being repressed like Iraq.”

Nasr said most Americans are at least vaguely aware of the differences between Shiites and Sunnis because of sectarian fallout after the Iraq war, when minority Sunnis who controlled most of the Iraqi government were ousted from power.

“In a lot of the Middle East, particularly the eastern part of the Middle East, you have societies that are divided along ethnic lines or particularly along sectarian lines,” Nasr explained. “Most Americans are familiar with the shifts in the divide because of Iraq. The problem we encountered in Iraq is actually present in many other countries. You had a minority of say, 10 to 20 percent of the population that has dominated political power and economic resources and is not willing to give up power easily.”

Nasr suggested that U.S. policymakers would be wise to make themselves aware of the inherent complexities of the Middle East, and not repeat the mistakes of democracy promotion and instantaneous regime change in Iraq.

“When the decision was made to go into Iraq, our assumption was that in the immediate aftermath of the war the whole discussion was going to be about democracy,” Nasr recalled. “It ended up being about settling scores between the different sects. We obviously didn’t know enough about the shape of Iraq’s society and therefore we were completely surprised by the way things developed.”

Nasr said a myopic “inside the Beltway” view of the Middle East also blinded U.S. policymakers to the realities on the ground in advance of the burgeoning Arab Spring. He said Americans were so focused on religious extremism that they missed the long-simmering economic and social grievances that sparked uprisings across the region.

Nasr said he has consistently found the American government’s lack of insight into such a critical region perplexing, given the resources it has devoted to it, including the launching of two exorbitantly expensive wars.

“If you depend on the region as much as we do and if you’re spending trillions of dollars on it, why is it that you are completely surprised by major developments?” he questioned.

However, Nasr said he’s been encouraged by what he’s seen within the halls of the State Department more recently. He said it seems that the United States is, indeed, learning from its mistakes. Part of that is recruiting people like himself — first- or second-generation Americans — who have backgrounds in the places the government is aiming to understand better.

“Now, we have a lot more people with regional backgrounds, many of them are Afghan, Pakistani, Arab, Iranian Americans who have grown up in this country but have a better understanding of issues on the ground,” he said. “They speak the native languages and they are entering government like every other American kid and they are making a big contribution.”

As an Iranian-American born in Tehran, Nasr, 50, is not only an academic expert on Iran, but also a practical one. He said the notion that Iran could be a major threat to the United States is misguided.

“Iran is a problem — I don’t believe it’s an imminent threat to us,” he contends. “Iran is not the Soviet Union in terms of economic or military capabilities or international or diplomatic resources. It is not China. Its economy is maybe the size of Massachusetts and has probably shrunk in the past year or so,” said Nasr, whose family immigrated to the United States following the 1979 Islamic Revolution.

“Its military capabilities — other than using some extremists — is limited and even its nuclear capabilities are limited to the future. It’s a regional menace and a regional threat. But it is not a global threat that would impact the global position of the United States. It is a problem we have to deal with, but it is not the existential threat it is made out to be.”

Nasr said that although Obama pledged to engage Iran diplomatically, potentially without preconditions (and was ridiculed in some quarters for making the suggestion), he hasn’t followed through.

That’s not to say the Obama administration has failed with respect to the Middle Eastern powerhouse, he added.

“The expectation the media makes of the process is probably outsized, but this is a very complicated process that is not going to go away with a single meeting,” Nasr said. “If there is a failure in how we have conceptualized this process, that failure was built on the previous administration.”

And what about Iran’s nuclear ambitions?

“Iran is without a doubt pursuing its nuclear program rather aggressively,” Nasr said. “Its strategy is probably to get to some kind of point of no return and establish realities that would become permanent before either the sanctions or international pressures succeed or before there is any kind of conceptual negotiation over capping their program.”

He added: “Their strategy is probably very much that of North Korea, in that once you get to a particular plateau you are home free.”

Yet Nasr suggested that Iran’s nuclear ambitions are defensive rather than offensive.

Iran also wants the prestige that membership in the nuclear club would confer, he says.

“Iran would like to use a nuclear status in the way that India or Pakistan or China have used it, which is to confirm that it is a regional, great power,” he explained. “They’d be able to assert prerogatives in the neighborhood and demand that smaller countries in the region agree to its leadership, etc.”

But Nasr said he doesn’t think Iran has a suicidal wish to destroy anyone (although Israel may beg to differ). “It’s not about hard power ambition, but ambitions of grandeur.”

Understanding the real motivations behind Iran’s behavior is key to addressing that behavior, and again, Nasr stresses that U.S. policymakers need to adopt an analytical approach to the region — one based on deeply researched facts and not superficial assumptions.

“I think we’ve come in the past years to try to explain everything through Islam,” Nasr argues in a recent video blog, saying that there’s “a deliberate lack of sophistication in trying to understand and analyze the Muslim world, trying to reduce everything into the language of religion.

“And I think that’s an imbalance that hurts us because then it’s very easy to gloss over real issues, and then end up in these cultural explanations that appear to be unbridgeable…. As an American and as a Muslim, as somebody with an origin in the Middle East, I see it as an important duty to help create that bridge in the public discourse.”