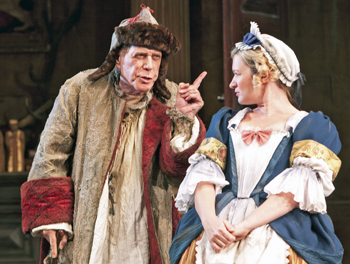 The Shakespeare Theatre Company’s silly but clever production of “The Heir Apparent,” which opens its 25th anniversary season, is unadulterated, enjoyable fluff — best absorbed with a concentrated focus or you risk getting lost in the assault of fast-moving, rhyming one-liners.

An adaptation of a 1708 comedy by French playwright Jean-François Regnard by Broadway’s David Ives (Ives also adapted the “The Liar” for the Shakespeare Theatre in 2010), no one can argue that this work is ingenious or the labor of a real pro. The play’s intentional motif is hammered home on overload, as is synonymous with French farces — and this script’s heavily worded wit is like candy for the brain. One word of caution, however: there’s a slight risk of sugar overdose. The production could have done with some text pauses and more wordless comedy to tease the audience and give its brain a breather.

Nevertheless, Ives is an expert at charming audiences with language, even when resorting to persistent “potty” humor, which strikes the right comedic chords when the dexterous Floyd King (who plays the lead, Geronte) delivers the lines. Modern-day political references, seemingly custom-written for D.C., also help to pull the audience along through the play’s intricate rhyming verses.

The play’s plot is simplistic. Geronte, a rich old miser on his never-ending deathbed, is prone to seizures and aggressive bowl movements. On top of that, the poor soul is also subjected to the unsolicited company of opportunistic relatives and servants who want nothing more than for him to keel over after he’s written his will in their favors. Eraste, his good-looking but poor nephew, schemes with Geronte’s zany servants to secure his uncle’s money before he dies.

The plot never gets any heavier or more involved than this, except for a few other details. Geronte spends most of his time coveting his greedy nephew’s girlfriend Isabelle even as he’s kicking the bucket, while Eraste and his gang engage in character impersonations and a dwarf-like lawyer gets pulled into the money feeding frenzy. Not too different than your usual day in the world of French farce fantasy.

Floyd King has shined in numerous roles as a regular Shakespeare Theatre cast member, but here, the outlandish, stingy, decrepit Geronte could be his best performance yet. His innate ability to infuse the dialogue with physical comedy through merely a stare is laudable. King has a self-deprecating aura where he deliciously melts into “foolish” roles, extracting the light-hearted mockery the playwright intended.

The rest of the cast, all under the tutelage of Artistic Director Michael Kahn, is undeniably adroit in complementing King’s absurdity. 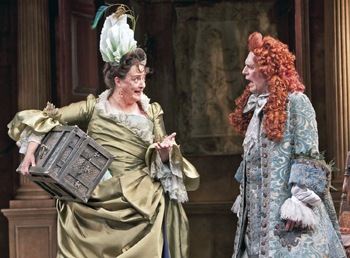 Eraste is given a boost by the handsomeness and fluidity of Andrew Veenstra, whose character’s vulture-like actions toward his uncle are forgiven by his boyish charm and opaque naiveté. Scene-stealer and quick-change artist Carson Elrod plays Geronte’s crafty servant Crispin, who will stop at nothing before securing a healthy chunk of francs for himself, while the old geezer’s humorously inappropriate maid Lisette is played by the energetic Kelly Hutchinson.

To round out the dysfunctional bunch is none other than veteran Nancy Robinette, whose standard yet always refreshing take on old madams — in this case, Madame Argante, the mother of Eraste’s love object Isabelle — is delicious.

Costume designer Murell Horton and set designer Alexander Dodge clearly delighted in this production’s over-the-top requirements. Ornate clothing and set decorations give the elaborate script a run for its money.

Likewise, Geronte’s cluttered, country lodge is a banquet for the eyes but must be a nightmare for the maid. Animal antlers, globes, books and hunting gear are shoved atop colossal furniture, while a mammoth grandfather clock wheezes out the time and frightens servants. Crammed onto the stage of the Lansburgh Theatre, the set works well to create the feel of intricately managed chaos.

“The Heir Apparent” may not be the Shakespeare Theatre’s most memorable play of its 25th anniversary season. Those to follow include more recognized fare —Shakespeare’s “Much Ado About Nothing,” “The Two Gentlemen of Verona” and “The Merry Wives of Windsor,” as well as Eugene O’Neill’s controversial “Strange Interlude.” Who ever heard of Jean-François Regnard, after all?

But if a break from the serious is something you need, this convoluted and obscure comedy is good for some seriously hard laughs.