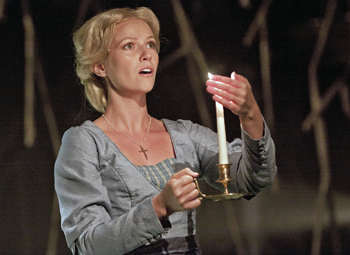 Signature Theatre is swinging for the fences in its 22nd season by staging two musicals in a concurrent, eight-week run.

One of the two plays reviewed by The Diplomat, “The Hollow,” fell far short of a home run, but still managed to score with a mostly appreciative Signature Theatre audience.

According to Signature, its ambitious effort marks the first time in the history of American theater that two full production, world premiere musicals are being presented in rotating repertory. “The Hollow” is based on a book by Hunter Foster that is an adaptation of Washington Irving’s classic short story “The Legend of Sleepy Hollow.”

The other play, “The Boy Detective Fails,” based on a book by Joe Meno, follows “boy detective” Billy Argo whose childhood full of wonder comes to an abrupt end with the shocking death of his young sister and crime-solving partner Caroline. Ten years later, Billy returns to his quiet New Jersey town after an extended stay at a mental hospital to solve the mystery of Caroline’s death, but in the process of righting old wrongs finds beauty and love instead.

The premise seems more tantalizing than “The Hollow.” On a recent Friday night, Signature’s cast worked as hard as possible to enliven Foster’s somewhat dull adaptation of “Sleepy Hollow.” Despite the ho-hum storyline, the production succeeds on the strength of its solid cast, an excellent score performed by a talented orchestra, and some standout singing.

The biggest problem with the “The Hollow,” directed by Signature vet Matthew Gardiner, is that the legendary horror tale of a murderous headless horseman is reinterpreted and reduced to a tepid love story. The romantic angle was central in Irving’s original short story, but it was the fearsome horseman that captivated most people’s imaginations. Here the headless horseman is, if not an afterthought, certainly not a front-and-center terror.

The play, which sets a fitting autumnal mood at the start of the fall season, opens with the townsfolk of Sleepy Hollow lamenting the recurring appearance of a sinister horseman in the night and cheering the arrival of a new schoolmaster, Ichabod Crane (Sam Ludwig), to their quiet town off the banks of the Hudson River in 18th-century New York. 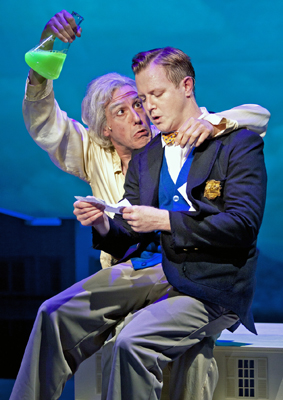 Crane’s arrival is perhaps most closely noted by Katrina Van Tassel (Whitney Bashor), the pretty daughter of the town’s wealthy banker Baltus Van Tassel, played with conviction by Harry A. Winter. The attraction between Crane and Van Tassel is immediately palpable upon Crane’s arrival in town, but an obstacle looms. Van Tassel is betrothed to Brom Van Brunt, a character delivered with convincing smarminess and menace by Evan Casey.

Soon, Crane’s penchant for bringing big-city ideas and books to the small devout hamlet begins causing all sorts of problems — and not only within Van Tassel’s conflicted heart. His introduction of “Gulliver’s Travels” to Van Tassel and then Noah Chiet, a young schoolboy, creates a mini-panic in the strictly religious community, while his proffering of subsequent secular books generates suspicion that God is using the specter of the headless horseman to punish the townsfolk for reading materials other than the Bible.

Crane, played with confidence and a touch of knowing humor by Ludwig, is especially sharp as he urges Van Tassel to cast aside her prim convictions about secular reading and opens her imagination. In the rather pedestrian play’s closest proximity to profundity, Crane has her imagine leaving the Hollow and flying over the forests to the ocean and eventually to Boston, where boats’ “white sails float on a blanket of sapphire.”

“Is it really that blue?” she asks.

“It’s as blue as you want it to be,” Crane replies.

That’s a nice and heartfelt scene — and it inspires a song about Boston that’s well-sung by Bashor — but isn’t this supposed to be a story about a sinister horseman killing innocent townsfolk?

Oh, yes. The equine menace does appear on occasion, evidenced by the loud clattering of hoofs and theater wings that glow bright red, but the simple fact is that the play about a frightening ghoul simply doesn’t inspire much dread — or much of any other emotion.

Staging the two musicals in rotating repertory is indeed an ambitious, laudable effort, part of the theater’s American Musical Voices Project. And it’s clear that Signature’s talented cast is working hard to make that effort worthwhile, but at least with “The Hollow,” their ambitions were thwarted from the get-go with a ho-hum reimagining of a classic tale that usually lets our imaginations run wild with anticipation.

in rotating repertory with “The Boy Detective Fails”