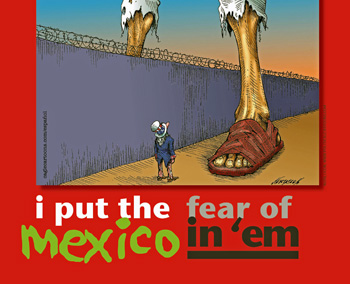 D.C.’s theater scene has evolved into one of the most respected in the nation, and while big-name Bard thespians at the Shakespeare Theatre and hit Broadway productions at Arena Stage often garner top billing, the city’s thriving international character has helped produced some of the most individual, innovative theater companies around — crowd-pleasers that often fly under the critical and mainstream radar but soar when it comes to creativity.

The Washington area’s Latino population has exploded in the last decade, as has GALA Hispanic Theatre, the city’s only major Latino performing arts company, although this gem in the heart of the nation’s capital remains relatively unknown to the masses.

The current season of GALA Hispanic Theatre, its 36th, features “I Put the Fear of Mexico in ‘Em” in the springtime.

From its humble beginnings in 1976 — as a small collective of theater, visual, musical and writing artists that migrated from one rented space to the next — to its well-established current status as a premier venue in the historic and renovated Tivoli Square complex in Columbia Heights — GALA has continued to make good on its original mission of groundbreaking theater “with a different accent.”

“While preserving Latino culture in adaptations and translations, we also add to that vitality of work by commissioning new scripts,” said Abel López, GALA’s associate producing director, from his office in the majestic old Tivoli Theater, GALA’s home since 2005. “We’ve continued our mission, with more space, and space we can control, and have added new dimensions to our offerings.”

At the time of GALA’s inception, there was a large influx of immigrants who left Latin America for political and economic reasons, Lopez explained. Many of these individuals had a long history of being engaged in the performing arts of their home countries. GALA founders Hugo Medrano, an Argentinean-born director-actor, and his wife Rebecca Read Medrano, an American dancer, decided to fill that artistic void for the Spanish-speaking community, as well as to make the English-speaking public aware of the richness and variety of Hispanic theater.

Having always offered four main stage productions, GALA (which stands for Grupo de Artistas Latino Americanos, or Group of Latin American Artists) has grown to encompass works from a multitude of nations throughout Latin America, the Caribbean and the U.S. Latin community, as well as Spain.

“GALA is not Spanish, nor Argentine, nor Puerto Rican,” Hugo Medrano has said. “It is Latino in the fullest sense.”

On the main stage, which accommodates a 261-seat audience, GALA’s first production is the modern classic “¡Ay, Carmela!” by José Sanchis Sinisterra, one of Spain’s leading contemporary playwrights. A collaboration with a theater in Madrid, the story tracks a vaudeville comedy duo who are forced by Franco’s fascists troops to put on a performance during the Spanish Civil War, where this black comedy on conflict plays out. The second main production will be a Spanish version of “Anna in the Tropics,” penned by Cuban-American playwright Nila Cruz. The Pulitzer-winning play follows Cuban immigrant workers in a 1929 cigar factory in Florida, where emotions are unleashed and traditions upended after the lector reads the novel “Anna Karenina.”

GALA’s springtime production is a U.S. premiere that deals with the current hot-button politics of the U.S.-Mexican border. “I Put the Fear of Mexico in ‘Em,” by Matthew Paul Olmos, a young Chicano writer from Los Angeles, chronicles an American couple who visit Mexico and, after stumbling off the beaten path, are accosted by a Mexican couple. The fourth production will be “Puerto Rico…¡fuá!” — a cabaret-style musical that looks at defining moments in Puerto Rico’s history.

Over the years, GALA has also added various series to its repertoire, such as ArteAméricA, which showcases the diversity of Latino arts — from flamenco dancers to comedians to musicians — to a broader audience, as well as GALita children’s theater, film festivals, and Paso Nuevo (New Step), a free educational program for at-risk youth.

One of GALA’s most impressive achievements though is its accessibility. It’s decidedly but not exclusively Latin. Most of its productions are in Spanish, but with English surtitles, while one main stage production a year is in English with Spanish surtitles, with this year’s English offering being “I Put the Fear of Mexico in ‘Em.” Before it used surtitles, GALA would produce each main stage play in both languages, which became costly when the company couldn’t find bilingual actors, López said. They migrated to using headsets for translations, which became problematic when audience members differed over whether their translations should be delivered flat or with inflection.

Today, GALA has their main stage scripts adapted for surtitles, which allows audiences to be completely immersed in the play with only slight visual distraction. This format has helped to attract Washington’s diverse Latino residents, the diplomatic community, and a growing audience of non-Latinos. And after 35 years and more than 165 productions that have won it numerous Helen Hayes Awards, GALA is still proud to have a different — but accessible — accent.

Silence is Golden for Synetic 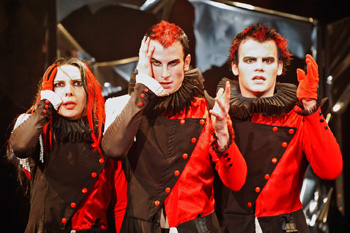 From left, Irina Tsikurishvili,Philip Fletcher and Alex Mills star in Synetic Theater’s production of “Othello,” which runs Oct. 19 to Nov. 6 as part of the group’s 2011-12 season.
Meanwhile, just over the 14th Street Bridge is a company that believes less is more when it comes to words. Synetic Theater, which has become a critical darling for transforming literary classics into silent productions of extreme physical theater — a moving tapestry of dance, music, kinetic motion and visceral imagery — has hit its stride in its new Crystal City home.

Like GALA, Synetic was a roving theater company searching for its niche. Founded in 2001 by Paata Tsikurishvili and his wife Irina, Georgian artists who moved to the United States in the 1990s, Synetic began as an artistic subgroup within the now-defunct Stanislavsky Theater Studio, which performed at the Church Street Theater in Washington, D.C.

Synetic made its debut in 2002 with a wordless adaptation of Shakespeare’s “Hamlet,” known as “Hamlet…the rest is silence,” and the rest was indeed silent when it came to winning over the critics. The production was remounted the following season and received the Helen Hayes Award for Outstanding Resident Play. Synetic has since been showered with more than 20 Helen Hayes Awards and nearly 80 nominations. Paata directs the productions and Irina, who graduated from a ballet academy, choreographs and performs. The ambitious duo has their sights set on becoming the premier American company specializing in physical theater.

Synetic takes its avant-garde reputation seriously. Its last production was a wordless adaptation of “King Arthur,” in which the entire stage was filled with water and the first few rows of the audience were designated the “splashing zone;” audience members enjoyed the performance wearing complimentary rain ponchos. For its 2011-12 season, dubbed “Emotion in Motion,” Synetic is fully capitalizing on its speechless success with its Speak No More: The Silent Shakespeare Festival, featuring wordless productions of “Macbeth,” “Othello” and “Romeo and Juliet” that are being reprised from past seasons.

“I like extremes,” explained founding artistic director Paata Tsikurishvili. “I like action and passion, to create something that makes you think, become a part of it, to make you really find out something.”

Tsikurishvili said he feels this dynamic is what makes his theater so unique and viable in a competitive market like Washington, D.C. “We, in the theater, are competing with movies and computer games,” he told us. “People [today] are so visual. That’s where my theater really is. I’m lucky because that makes us singular, pioneers. There is no such thing [as physical theater] in Washington, D.C.”

A force of theatrical nature himself, Tsikurishvili comes from a cinema and acting background, where he began his creation of wordless works. The Georgian native studied film and wrote and produced three films without texts. As an actor, he was drilled in experimental forms of pantomime, mime and other forms of physical theater. 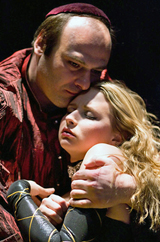 Irakli Kavsadze as Friar Lawrence, left, and Courtney Pauroso as Juliet star in Synetic Theatre’s “Romeo and Juliet,” part of its Speak No More: The Silent Shakespeare Festival this season.

Tsikurishvili says he tends to be drawn to tragedies, the supernatural and scary plays, and when first attempting to produce plays in America, he discovered that while humor is often culture specific, tragedy is universal. He has tried his hand at a few comedies, however, though he hasn’t strayed far from his Shakespearean inspiration. Later this season, for example, Synetic will tackle the “Taming of the Shrew.”

But the Bard’s plays only make up one part of Synetic’s varied repertoire. Past productions have included “Don Quixote,” “Dracula,” “Host and Guest,” “Carmen,” “Faust,” “Antony and Cleopatra,” “Frankenstein,” and “The Master and Margarita,” most of which received raves from the local press. “They are masters of sensation, this uniquely disciplined troupe,” as one review in The Washington Post put it, calling the Tsikurishvilis “mesmerizing, melding intensity and craft.”

The couple’s determination really paid off in September 2010, when Synetic moved into its own theater space in Arlington, Va. Productions are now housed in the Crystal City location and at the Lansburgh Theatre in Washington, D.C. The move to Crystal City has also allowed the group to expand its offerings. This spring, Synetic launches “New Movements,” works created and directed by company member Ben Cunis and Czech physical theater artist Mirenka Cechova. Synetic will also continue offering its acclaimed family theater performances for children. This year, it will produce “The Rough-Faced Girl: A Native American Cinderella Story” and, true to form, a “Teen Romeo and Juliet” performed by a teenage ensemble.

Despite the economic downturn and generally inhospitable climate for eclectic, fledging art groups, Synetic, like GALA, has found its home. After a decade, the Tsikurishvilis’ vision now boasts 45 company members and is still growing. “Now it is time for more directors and choreographers,” Paata mused. “When we leave [this Earth], we don’t want to take everything with us.”