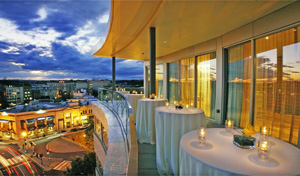 The Dupont Circle Hotel is standing a little taller these days. As part of a $52 million renovation in 2009, the hotel gained a ninth floor — and more than 10,000 square feet devoted to luxury.

Level Nine, as the hotel’s new section is called, is billed as a hotel within a hotel. The floor is dedicated to 15 suites — the only ones in the property aside from two on the eighth floor — a common area and event space. Just one of the hotel’s three elevators goes to the ninth floor, which is accessible only with a room key.

The Doyle Collection, which owns the hotel, decided to add Level Nine shortly after buying the property, which was formerly the Jurys Washington in 2008. The reasoning was to meet the demands of Washington visitors, said Aaron Gillespie, area director of sales and marketing for the Dupont Hotel and sister Normandy Hotel. About 40 percent of the hotel’s business comes from group bookings, so a bank of suites was a sensible addition.

For years, D.C. has been evolving and establishing itself as a metropolitan destination renowned for restaurants and good shopping in addition to monuments and government. “It’s just kind of changing the scene versus it’s always been a political city,” Gillespie said.

The décor of the hotel’s lobby and 327 rooms, including the suites, reflect that shift. It eschews the classic European look of many D.C. lodgings for a tasteful modern look with clean lines, earth tones and the occasional pop of color. “They’re streamlined rooms, so I think this is unusual for Washington, which makes it more interesting,” he said, referring to the absence of ornate frill. “It’s modern but it’s not kitschy.”

The efforts have not gone unnoticed. Fodor’s added the hotel to its top 100 list in November in the category of “Clubby Atmosphere – Hip Urban Pied-A-Terre.”

Level Nine’s suites feature upgraded amenities not found in the hotel’s other guestrooms. They include 10-foot floor-to-ceiling windows, glass balconies, wide-plank hardwood floors, daily fresh flower delivery, packing and unpacking services, and in-room beverages that are included in the room price, which ranges from $550 to $1,500 per night. The bathrooms are also slightly fancier, sporting jetted bathtubs with televisions built into the wall, heated towel racks and two sinks instead of one.

The artwork that hangs in each suite is different and hand picked by the owners. As a result, no two suites are the same. “The rooms, all of them are different, so you feel almost as if you’re in a home away from home,” Gillespie said.

The crème de la crème of the rooms is the bi-level Presidential Suite, which can be reserved as two or three rooms, including one on the ninth floor and two on the eighth, connected by a private staircase. The best part is the Level Nine suite’s walk-out balcony overlooking bustling Dupont Circle.

All of the suites share a 900-square-foot living room common area complete with food prepared by a sous-chef that’s available throughout the day, including breakfast, snacks and beverages. The Heights, a meeting space that can accommodate up to 75 people, is also located on the top floor. It features a terrace that provides sweeping views of the city, including the National Cathedral.

If guests prefer not to dine in the common area, they can choose from two on-site eateries. Café Dupont is a full-service restaurant serving French-style food for breakfast, lunch and dinner in an upscale space almost completely enclosed by glass. Try the moules marinière, mussels in white wine, cream, shallots and herbs, to start and follow them with a rib eye steak served with a light but creamy béarnaise sauce.

Across the hall from the café is Bar Dupont, serving lunch and dinner in addition to drinks. Formerly an Irish pub, it too was renovated with a modern, urbane look and plenty of outdoor seating, including a nook of comfy couches.

“Once again, it’s that major interaction between the hotel and the circle and the people in the area,” Gillespie said.