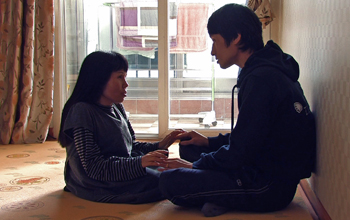 The story of a deaf and blind South Korean poet who refuses to accept any limitations won the Sterling Award for Best World Feature at this year’s AFI-Discovery Channel Silverdocs Festival.

The 10th annual AFI-Discovery Channel Silverdocs Documentary Festival showcased the screening of 114 films from 44 countries and a five-day professional documentary conference in June. More than 27,000 guests, including more than 1,000 filmmakers, media professionals, and film and television executives, attended the weeklong film festival based in Silver Spring, Md. The following awards honor major highlights of Silverdocs 2012:

Synopsis: A deaf and blind South Korean poet is unwilling to accept as limitations the world of sight and sound from which he is isolated.

Jury comments: “This film immersed us into the sensorial experience of love unbound. The poetic cinematography of life’s seemingly ordinary moments underscores the complexity of life itself.”

Synopsis: Even in tolerant Switzerland, the benign administration and guards of the Frambois detention center near Geneva can do little to alleviate the fate of undocumented immigrants entrapped in its system.

Jury: “This film patiently portrays what life looks and feels like inside the walls of injustice where a group of detained immigrants and their sympathetic caretakers are bound together by a complex web of inequality. Through his powerful vérité filmmaking and access, Fernand Melgar lays bare a life without freedom.”

Jury: “We loved this film for its striking and beautiful cinematography and its innovative editing. But above all, we loved it for its sensitive and startlingly honest portrayal of adolescence. Neither saccharine nor snarky, the film captures the depth and absurdity of being a teenager without cliché or caricature.”

Synopsis: The ER waiting room in Oakland’s Highland Hospital serves as the backdrop to an encounter with a diverse community of largely uninsured patients alongside an indefatigable staff charged with caring for them.

Jury: “The best documentaries immerse us in new worlds and connect us with people we’ve never met. This vérité film gives us a personal experience with patients and caregivers trying to navigate a complicated and flawed health care system.”

Synopsis: Inhabited by numerous transplants from New York who were lured by the promise of sunshine and palm trees, Kings Point is a place where retirees have begun a new part of their lives, for some the final chapter.

Jury: “[A] bittersweet exploration of the universal needs and challenges of creating human connections — even within a seemingly close-knit community of peers.”

Synopsis: Two sisters who watched their mother suffer the indignities and pain of struggling with cancer when they were younger now own a beauty salon in Islip, Long Island, where they open their doors every third Monday of the month to women living with cancer. 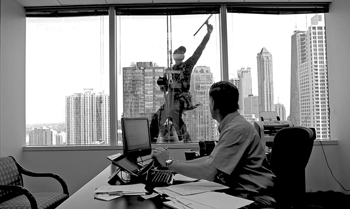 “Paradise” documents the lives of three immigrants from Mexico who scale Chicago’s skyscrapers to clean windows.

Jury: “[Engaged] the viewer on a raw, emotional level through the moving testimony of two indelible characters facing illness.”

Synopsis: Three immigrant workers from Mexico make their living in an unusual way: by rappelling down some of Chicago’s tallest skyscrapers to clean windows.

Jury: “[Took] the audience to new heights in experiencing a unique perspective on immigrant labor through beautifully lensed and adventurous cinematography.”