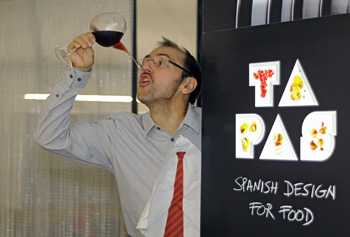 “TAPAS. Spanish Design for Food” showcases the innovative designs and playful whimsy that go into creating the small plates that have become a hallmark of Spanish cooking.

Spanish cuisine is renowned around the world and in Washington. El Celler de Can Roca in Girona was named the world’s best restaurant in 2013 by Restaurant magazine, with two others in the top 10, giving Spain the highest number of restaurants among the 10 best in the world.

Locally, Spanish-American chef José Andrés has built a name for himself with his Jaleo brand of restaurants, becoming both a Beltway personality and international celebrity chef.

Jaleo specializes in the small plate concept known as tapas — perhaps Spain’s most enduring contribution to the culinary world. These small plates go beyond simple snacks. They pack a big bite of both flavor and creativity, showcasing a chef’s artistry and skill, as well as Spain’s fusion of food and design.

The Spanish Embassy brings all these ingredients together in “TAPAS. Spanish Design for Food,” a sweeping, colorful, playful multimedia exhibit in the former residence of the Spanish ambassador, a grand Beaux-Arts mansion that now serves as Spain’s cultural center.

“We demonstrate that the Spanish gastronomic explosion doesn’t take place in a void,” said Guillermo Corral, the embassy’s cultural counselor. “It takes place within the creativity of many disciplines and combines architecture, industrial and graphic design. We take classical elements and turn them into something else for pleasure, fun, utility and creativity.”

In Spain, chefs, designers and architects all come together to create the right setting for an innovative meal. It’s a philosophy embraced by Andrés, who served as chef advisor for the exhibition. Andrés, whose Jaleo restaurants in D.C. and Bethesda, Md., recently underwent a redesign, says that “working with the best ingredients is how we create an astonishing dish, but in order to create a memorable experience, the best elements of design, from the kitchen, to the table, to the plate, all must come together to tell an exciting story.”

In the 1980s, the interior design of Spanish restaurants underwent a striking transformation, which led architects and decorators to turn restaurant design into a specialist field, said Juli Capella, curator of the exhibit and a designer and architect herself (who designed Minibar, Jaleo and other Andrés restaurants).

“The American public isn’t fully aware of the depth of interest and passion there is for food in Spain,” Corral said. “We show in an entertaining way how sophisticated, avant-garde, innovative and ironic both cuisine and its design are.”

The exhibit does this with more than 200 objects organized into three categories — kitchen, table, food — as visitors are guided room to room by bold white lettering and directional arrows emblazoned on black carpet. The result is visually exciting and beautifully executed, much like a satisfying long meal. 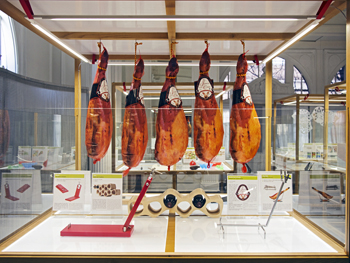 “Tools for the laboratory that has become the kitchen” — that’s how Capella described the utensils and containers that have been used in the kitchen for ages but updated to 21st-century sensibilities.

Here, form and function meet fun. A white polyethylene cutting board features curved ends that gracefully pour out the food you’ve chopped, such as tiny pieces of an onion into the skillet on the stove.

Another inventive cutting board has random holes pierced in the thick wood pallet. So as you slice a loaf of bread, the crumbs fall through the holes and are funneled through a tube that deposits them not into a trashcan, but outside the house into a bird feeder. Waste not, want not.

A citrus spray also doubles as an ingenious gadget. A conduit with a sharp point is inserted into the top of a lemon or orange and collects the juice when you press the handle. Then the juice sprays out.

An ice cube mold lets you make, store and artfully present 132 ice cubes on the table. Drop a raspberry or other small bit of fruit in the water to solidify in the cube for added artistic effect.

“Wares in this category show a rich tradition of Spanish arts and crafts renovated and updated — the interaction of ceramics and gastronomy,” said Capella.

“One aspect is playfulness,” said Corral, pointing to a plate that, except for the aluminum silver coloring, resembles a slice of rye bread.

Another item literally blends food and art. A white plate is shaped like a paint palette, replete with thumbhole to hold it and a slot for a wine glass stem. It is clever and simple — perfect for balancing food and drink at an embassy cocktail party.

Other items playfully incorporate the source of much of our food. White ceramic jugs, plates and serving trays are cast directly from animal organs such as cow hearts, pig intestines and sheep brain, a strange but organically natural design. A white mug is nothing special until you lift it to drink. Then the person sitting opposite sees a colored cartoon of an animal’s face on the bottom.

“In Spain we love to play with food and not just eat it,” said Capella, striding over to a soccer foosball table that doubles as an actual dining table. Chef Andrés installed thick glass inches above the toy soccer game and viola, created a dining table. 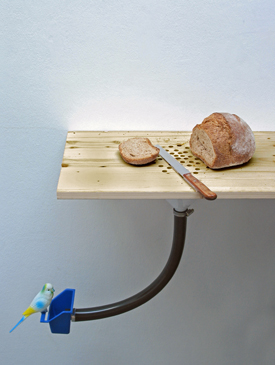 Another whimsical but functional invention is a narrow folding table that seats four people in a small space such as the tightly confined balconies that dot European cities. A wood trestle with four legs incorporates plastic holders into which plates, cups and soup bowls can be inserted. There’s even a holder for an ice bucket, wine bottle, flowerpot and candle. You can eat a leisurely meal at a fraction of the space.

Practically everyone knows tapas are Spanish, but did you know that “tapa” means “lid” in Spanish and is derived from the ancient custom of covering a glass of wine with a piece of food such as a bread slice? There are several legends about the origins of tapas. One rumor is that a king required drinks to be accompanied by food to help patrons avoid getting too drunk. This concept evolved into tapas — small dishes of food accompanied by wine.

The last section of the exhibit will make you hungry for more than history, offering delectable examples of the food that’s defined Spanish cooking.

A video of how churro is produced makes you want to stick your hand into the screen to grab a fistful of the deep-fried doughy confection, which comes out of a machine with a star-shaped nozzle and is hugely popular in Spain.

A wall display depicts a dozen “paelleras,” the special skillets for paella, which vary in width but are all the same shallow depth to optimize cooking of this Spanish culinary staple.

Some of the food on display looks good enough to eat, but it isn’t real — a deception that serves a purpose. For example, foods are made using colored plasticine, a putty-like modeling clay, and laid on a plate in stylized compositions to help cooks replicate the design of a complicated multiple-piece meal.

Ceramic tapas will also trick you. Exact replicas in size, shape, color and sheen, they are used in bar displays to let the public know what’s available without laying food on the counter to spoil. Glistening black olives and roasted potatoes bristling with butter and green peppers are sure to whet the appetite, even if they are only illusions.

One of the most striking installations is a selection of wine bottles housed in a five-level, circular white display brightened by LED lights that illuminate the bottles, which stand out for their bold and appealing labels.

“Everyone knows that to eat is a need, but it’s also an experience, a ritual,” said Capella. “We eat three times a day, which means thousands of times in a lifetime. In this exhibit we show food can be decorated, that we can have fun with food, its preparation and serving it. We make the experience of eating entertaining.”