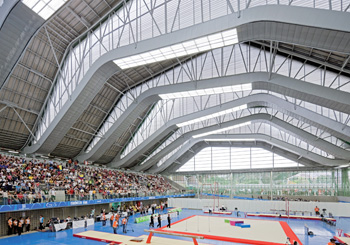 To step off 18th Street and into the Art Museum of the Americas is to set foot in Spain, or Honduras or Argentina. Because housed inside the diminutive museum, an extension of the Organization of American States, are some of the world’s greatest buildings.

Here, in an otherwise underwhelming gallery, is a sweeping collection of photographs representing the best of architecture throughout Spain, Portugal and Latin America.

The exhibit, “Transforming Cityscapes: Winning Entries of the 8th Ibero-American Architecture and Urban Design Biennial (IAUB),” has a long title but straightforward premise: to survey the architectural trends that are shaping cities in the Ibero-American world (countries that were once ruled by Spain and Portugal).

The IAUB focuses on the achievements and ideas presented by architects and architecture students. Every two years, a jury of representatives from various fields selects the best projects, comparing and contrasting different architectural and urban design initiatives in the countries that comprise the Ibero-American community. 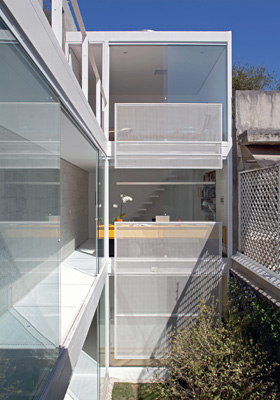 Included in the exhibit are publications, research projects, proposals and videos from 2009 to 2011 that are sure to please any architecture aficionado. It’s the eighth such installment of the competition that began in Spain in 1998, with the first IAUB held in Madrid. Since then, biennial competitions have been held in Mexico City, Santiago de Chile, Lima, Montevideo, Lisbon, Medellín, and Cadiz, Spain. The ninth installment will be held in Rosario, Argentina, in October 2014. 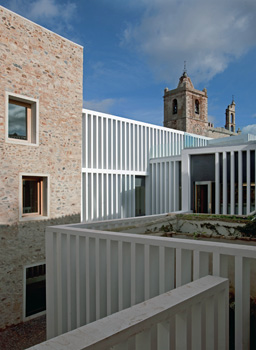 The items on display also reveal the scope of architectural skill found throughout these countries. From a pedestrian bridge spanning the skyline, to an outdoor relaxation space, to a home brilliantly lit by expansive windows, the collection is both geographically and aesthetically diverse.

Architectural elements don’t always attract our notice — we often take the underpinnings of everyday structures for granted, overlooking the artistry that went into them. But the images at the Art Museum of the Americas refocus our attention on the imagination and innovation contained within buildings and infrastructure. Photographs draw our eyes to the sleek glass floor-to-ceiling windows of a residential building in Brazil, the graceful beams hovering over a massive indoor sports coliseum in Medellín, or the medieval-inspired exterior of an upscale contemporary hotel in the historic city of Caceres, Spain.

Devin Dotson, a nonprofit communications executive who previously lived in Chile, stopped short as he toured the exhibit. There, a photograph of “Arquitectura del Campus Universidad Adolfo Ibáñez” by José Cruz Ovalle caught his eye. “This was right near where I lived,” he said excitedly of the private university in Santiago. “I watched these buildings go up.” His eyes scanned the corners of the photograph, and the edges of the territory it covered, and for a moment, it was as if he had stepped back onto the university campus. One could almost see him strolling on the sidewalk next to the building, so transported was his gaze.

The 200 people crowded into the small exhibit seemed similarly transported, with many converging around particular photographs, analyzing the buildings, imaging them in their daily lives. Could we live here? Could we work there? How would this building look in the skyline of Washington, D.C? London? New York? Dubai?

Just as we view portraits and attribute all manner of characteristics and personalities to their subjects, so too do we view buildings. And these buildings, which transformed their landscapes back home, left an indelible impression on the people viewing them from afar, taking them to places they’d been, or places they’d want to visit.