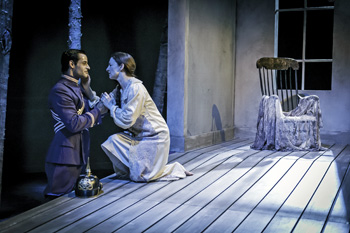 Luz Nicolás, at right, plays a woman who mysteriously ended her engagement to a dashing Chilean captain (Victor Maldonado, above left) when she was young in Mario Vargas Llosa’s “The Young Lady from Tacna (La Señorita de Tacna).”

“The Young Lady from Tacna (La Señorita de Tacna),” written by Peruvian playwright Mario Vargas Llosa, is a tricky memory piece. The enigmatic script, performed in Spanish with English surtitles, has many layers. It moves back and forth in time, showcases a story within a story, and tries to uncover mysteries within the plot. All these challenges make it difficult to pull off — and GALA Hispanic Theatre’s current production is a testament to those hurdles.

An admirable but possibly over-ambitious effort, “Tacna” is the story of a middle-age Peruvian man, Belisario, played by GALA company member Carlos Castillo, who spends the play composing a novel about his mysterious, now-deceased aunt. Belisario’s humble abode, complete with an old-fashioned typewriter and overflowing library filled family photos for inspiration, permanently occupies stage right and is physically divided from the action of his developing fiction, unfolding on a minimalistic set stage left. On occasion the struggling writer, who desperately wishes to turn his novel into a grand love story, breaks the barrier and becomes a character in his book, as if to portray a deeper connection to his craft.

The somewhat autobiographical “Young Lady from Tacna” examines the writer’s creative process. “In exploring the themes of family and a family’s secret history, Vargas Llosa returns to familiar territory: how a story is born and why certain stories must be told and relived,” said José Carrasquillo, who directs the play.

Belisario taps away on his ancient typewriter, paces the floor in exasperation, crumples up unwanted words on pages, chides himself for delving into irrelevant tangents, and becomes excited over choice nuggets that bubble up from his consciousness.

All the while he’s fascinated by his aunt, Mamae, a 100-year-old woman who never married and abruptly ended her engagement to a dashing Chilean captain when she was young, even going so far as to burn her wedding dress, for reasons never understood by her family. In a religious culture in South America, where traditions die hard, being considered a “spinster” left many questions.

Carrasquillo succeeds in recreating Belisario’s frustration and confusion over family secrets and the difference between real-life events and his own imagination — possibly to a fault. Belisario’s confusion at times becomes our own. For example, Giorgos Tsappas’ simplistic set for the writer’s creation — a raised, slanted room with a wood floor and one chair in the corner, in front of a dimly lit backdrop of trees — leaves the audience’s eyes and imagination wanting more. It’s unclear why the floor is slanted (is it a metaphor for a skewed writer’s memory?) or why the trees in the background don’t have leaves or branches (do the trees symbolize gravestones because all the characters have passed on at the time of his writing?). Instead of being intriguing, these confusing details are a distraction. 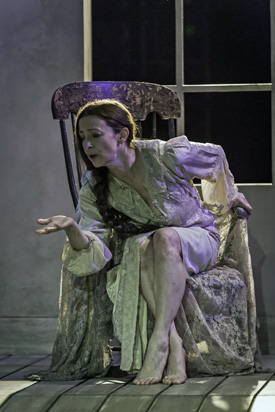 Although it’s ideal for an audience to relate to the protagonist, even when he is frustrated, watching the play unfold should not cause annoyance — a risky fine line, at best.

This rears its head again with script transitions between the world of the artist and the world of his creation. At times, Belisario’s commentary is an added bonus for clarification, but at other instances, it feels like an unwanted interruption.

Other challenging transitions are those of time. Carrasquillo, who also directed Nilo Cruz’s Pulitzer-winning play “Ana en el trópico” at GALA, admitted in an interview the difficulties of directing a play that doesn’t have the structure of scenes, with no black-outs or scene changes.

And the script jumps around a lot, spanning the period when Mamae, played deftly by Luz Nicolas, was a young, sweet-16, innocent maiden on the brink of her marriage, to when she was an elderly woman who moves in and out of mental reality, sometimes with hysteria. It also chronicles the latter part of the 20th century and the devastating consequences of the War of the Pacific between Peru and Chile (1879-83), a clash whose hostilities still simmer today. Luckily, Nicolas as Aunt Mamae makes these transitions seamlessly. She takes her time moving from a youthful spirit to an incontinent, befuddled senior with dexterous, slow, controlled movements, giving the audience ample space to adjust to plot changes.

The only other standout character is Pedro, the grandfather of the clan, played by GALA Artistic Director Hugo Medrano.

GALA Hispanic Theatre, housed in the historic Tivoli Theater in the heart of gentrified Columbia Heights, has become a leading Spanish theater company over the last three decades. Vargas Llosa, who won the Nobel Prize in Literature in 2010, is a favorite among the area’s largely Hispanic population, which may know him better for his fiction than for his theatrical productions. Yet for the rising local community, it’s certainly a treat to attend performances that showcase Latin culture in their native language.

“The Young Lady from Tacna,” however, for myriad reasons, sometimes gets lost in translation.