Home The Washington Diplomat April 2014 From World Leaders to Lady Gaga, a Portrait of People on the Move 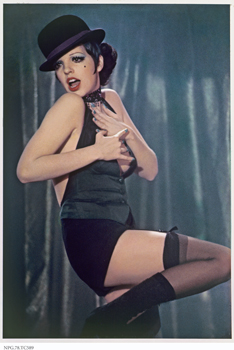 “Dancing the Dream” features photographs of famous dancers over the last 100 years, such as Liza Minnelli.

You wouldn’t think that two photography exhibitions like “Yousuf Karsh: American Portraits” and “Dancing the Dream” even belong in the same building, but at the National Portrait Gallery, they graciously hold court together. The images, while screaming with individuality, speak to each other and say a lot about the nature of portraits, personality, lasting fame and American diversity.

Within that diversity lies a world of differences, as the faces of old Hollywood glamour and intimidating world leaders make for strange companions to the exuberant, almost flirty expressions on impresarios such as Liza Minnelli.

The contrast between the two exhibitions is of course a product of the subject matter. Canadian-American photographer Yousuf Karsh was renowned for his portraits of statesmen, artists, musicians, authors, scientists and people of accomplishment. He became famous by photographing the famous. When we think of people like Winston Churchill or Ernest Hemingway, we often unconsciously think of them within the frames of their Karsh portraits.

“Dancing the Dream” depicts artists who’ve left their mark on the world of dance over the last 100 years, from Rudolph Valentino to Beyoncé.

Both shows have a distinctly American flair but are fundamentally different. There is something purposefully permanent about the Karsh portraits, as if they’re meant to be a definitive, final look at a particular subject. They’re the photographic equivalents of a lengthy biography, securely locked within the frame.

The photographs in “Dancing the Dream,” on the other hand, are elusive and kinetic, like the journeys of the dance icons they portray. They offer a fleeting glimpse into a world that is constantly and quite literally on the move.

Yet both exhibits share a sense of privilege: They allow viewers to peer into the lives of vibrant performers and outsize personalities frozen in time, a stillness captured by the camera that belies their action-packed lives.

That was part of Karsh’s gift, says Kim Sajet, director of the National Portrait Gallery. “He not only had the uncanny ability to amplify a person’s character, but also offered everyday people the opportunity to glimpse into the private lives of the men and women who shaped the 20th century that feels both personal and real,” she said.

The Karsh exhibit itself is a gift: The photographer’s wife, Estrellita Karsh, donated 100 portraits to the museum. The 27 images in the current installation will run through April 27 and another exhibition of 27 more iconic images will begin May 2 and run through Nov. 14.

With the exception of a portrait of Karsh himself, sternly checking out an image, and that of his wife Estrellita, the exhibition is a parade of who’s who in 20th-century America. The Armenian-born photographer moved to Canada as a teenager and eventually became a prominent portraitist of world figures. Karsh worked in a manner that was both studied and spontaneous — exemplified by his 1941 shot of Winston Churchill that propelled Karsh’s career. In the picture, the British prime minister, visiting the Canadian House of Commons, looks stern, indefatigable, an immovable wall of a leader. Karsh reportedly wanted that bulldog look, and he got even more of it when he asked Churchill to put away his cigar.

Also included are other luminaries spanning the political and arts realms, including Franklin and Eleanor Roosevelt, a smoking Tennessee Williams, and the placidly beautiful Grace Kelly. 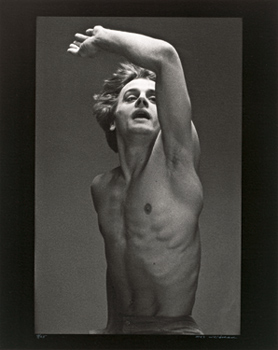 Max Waldman’s photograph of Mikhail Baryshnikov in “Le Jeune Homme et la Mort” is among the images in “Dancing the Dream” at the National Portrait Gallery.

Martha Graham, the scion of American modern dance, does double duty here, appearing in both the Karsh and dance exhibits. “Dancing the Dream” explores modern, classical and contemporary dance over the past century through nearly 70 photographs spread out over six sections, including “Broadway and the American Dream,” “The Rise of American Ballet,” “Choreography Goes Pop” and “Dance in the Media Age.”

The halls are full of American originals, beginning with the legendary Isadora Duncan and her own take on modern dance. You see the emergence of a distinct American style of dance on Broadway, where Agnes de Mille revolutionized a stage previously inhabited by chorus lines and show girls by injecting choreographed numbers into the musical “Oklahoma.” You can even see James Cagney as Broadway legend George M. Cohan in “Yankee Doodle Dandy.”

There are newer faces as well, such as Lady Gaga clad in leather and Beyoncé draped in a bejeweled top that barely covers what it needs to. But all of the images prompt a certain admiration for the disciplined form and free spirit of dancers, as seen in Michael Jackson’s gyrating, dramatic moves, Gregory Hines’ swift grace, Mikhail Baryshnikov’s lithe strength, the outrageously sinuous Liza Minnelli, and the pop culture mastery of Madonna.

They captivated us with their innovation and sheer talent, just as the people in Karsh’s portraits continue to fascinate us. The National Portrait Gallery offers a moment to reflect on this dynamism, which stood still just long enough for us to admire today.