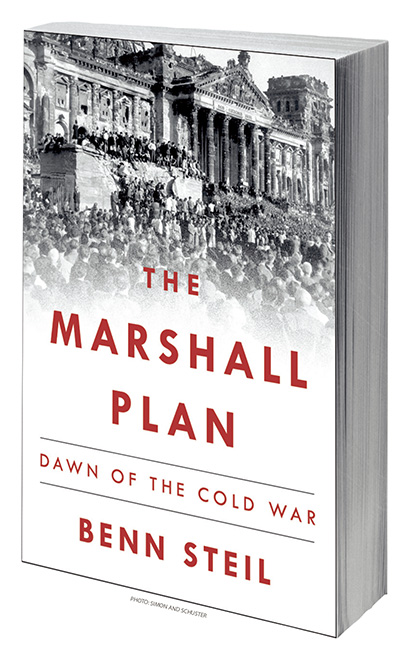 In the current political climate, it’s often difficult to recall that there was a time, not so many decades ago, when American political leaders were respected around the world as strategic and competent, as kind-hearted and tough-minded. Few initiatives better exemplified American effectiveness and excellence than the Marshall Plan, the economic assistance program designed to help rebuild Europe after the devastation of World War II.

“The Marshall Plan: Dawn of the Cold War” by Benn Steil impressively describes the complex history of this initiative. Steil is a fellow at the Council on Foreign Relations with an expertise in international economics.

Steil persuasively argues that the Marshall Plan, while imperfect, was smart, effective and generous. After the plan was approved by Congress, The Economist magazine declared “there is no record of a comparable act of inspired and generous diplomacy.” British Prime Minister Clement Attlee called it “an act of unparalleled generosity and statesmanship.”

Steil shares this assessment. “The Marshall Plan is remembered as one of the great achievements of American foreign policy not merely because it was visionary but because it worked,” he writes. “It worked because the United States aligned its actions with its interests and capacities in Europe, accepting the reality of a Russian sphere of interest into which it could not penetrate without sacrificing credibility and public support. Great acts of statesmanship are grounded in realism no less than idealism. It is a lesson we need to relearn.”

“The Marshall Plan” describes how the U.S. — faced with Red Army soldiers stationed throughout Eastern Europe and a post-war continent in tatters — invested more than $13 billion ($130 billion in today’s dollars) to build up democracies and market economies in Western Europe as a bulwark against communism. Part of that investment went toward reviving German industry, a prospect that alarmed Europeans traumatized by Nazi atrocities. As a result, the U.S. established a troop presence in Europe to reassure nervous allies.

Steil posits that the Marshall Plan, in fact, triggered the Cold War, as Joseph Stalin viewed the endeavor — and the subsequent creation of NATO — as a vehicle for expanding American power on the continent, forcing the Soviets to dig in and fortify their own spheres of influence.

Steil argues that following the death of President Franklin D. Roosevelt in April 1945 and the conclusion of World War II several months later, the new president, Harry Truman, faced a series of daunting decisions. Truman shared little of FDR’s optimism that the United States and the Soviet Union could enjoy an amicable relationship or that the United States could trust Stalin to be a restrained and cooperative ally.

With the United Kingdom pulling out of important global positions and the Soviet Union eager to take advantage of this retreat and mounting chaos in Europe, Truman initially requested $400 million to help stabilize Greece and Turkey. It was now American policy, he declared, to “support free peoples who are resisting attempted subjugation by armed minorities or by outside pressures.”

This speech enunciating the Truman Doctrine was very consequential, marking “a radical break from FDR’s vision of a United States acting on the world stage through the new United Nations,” Steil writes. “It would instead mark the first time a U.S. administration would justify a muscular course of unilateral action outside the U.N., even though it would claim to do so in support of the organization’s ends.”

George Marshall, Truman’s secretary of state, is a towering leader in this book as he oversees the forceful American response to Europe’s woes, builds support for the plan within the United States and defends it to the outside world. Marshall became convinced that the Soviet Union’s vision of a post-World War II world was far different than the U.S.’s. Marshall decided a vigorous American response to European disarray and Soviet adventurism was essential. He outlined his ideas during a commencement address at Harvard on June 5, 1947. 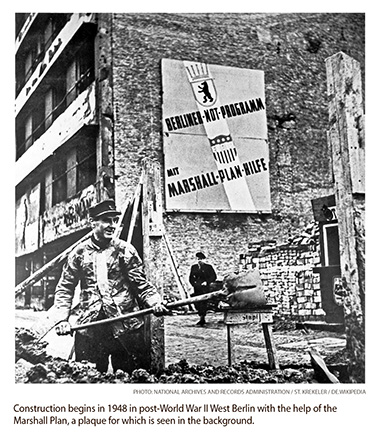 “Our policy is directed not against any country or doctrine but against hunger, poverty, desperation and chaos,” he declared. “The program should be a joint one, agreed to by a number, if not all European nations,” he added. Marshall also signaled American resolve to Europe and to the Soviet Union. “Any government which maneuvers to block the recovery of other countries cannot expect help from us,” he said with firm understatement that now seems refreshing.

Marshall, according to Steil, had only the “haziest of templates” of the plan he would offer and relied on accomplished aides such as Dean Acheson and George Kennan to flesh it out. Republican Sen. Arthur Vandenberg, the chairman of the Senate Foreign Relations Committee, urged Marshall to frame the plan as a means to combat Soviet communism’s threat to Western Europe and the American way of life.

The administration initially sought a $17 billion aid package over four years for Europe. However, responding to political realities, Vandenberg insisted that it be pared back and phased in gradually, beginning with $5 billion for the first year. He also pushed for an independent agency outside the State Department to run the program.

“It is a plan for peace, stability and freedom,” Vandenberg said of the redrafted package during the Senate debate. “As such, it involves the clear self-interest of the United States. It can be the turning point in history for 100 years to come. If it fails, we will have done our final best. It if succeeds, our children and our children’s children will call us blessed.”

In “The Marshall Plan,” Vandenberg is depicted as a statesman willing to set aside his ambitions for the presidency to advance the national good and to save Europe. Marshall later said that the plan named after him would not have been approved without Vandenberg. “I felt that he never received full credit for his monumental efforts on behalf of the European Recovery Program, and that his name should have been associated with it,” Marshall said.

Vandenberg played a central role in assembling the plan and moving it through a Republican-controlled Congress. “At home in the United States, the Marshall Plan became legislation against all odds,” Steil writes. “By contemporary standards of cross-party cooperation and public support, it was a remarkable triumph. The Republican 80th Congress had been in no mood to devote vast new funds to foreign aid. But the political packaging of the program was masterful. It appealed to internationalists as well as anticommunists.”

The Soviets, suspicious of the plan, prevented its Eastern European allies from participating in it. Steil believes the Soviet Union could have derailed the Marshall Plan had it allowed Eastern European countries to join the negotiations and then sabotage them. “The Soviets and their satellites could have bled Marshall’s offer to death with demands and grievances over terms. Instead, Stalin allowed himself to be goaded into rejecting it, casting the Soviet Union as an enemy of recovery,” Steil writes, noting that Acheson observed that the United States was “fortunate in our enemies.” 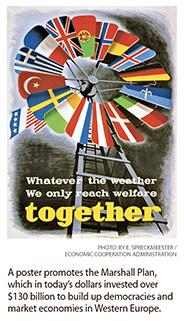 The book shows the plan was assembled on the fly but became one of the crown jewels among the programs and institutions that bolstered the West after World War II, such as the World Bank, the International Monetary Fund, the European Union and NATO.

Steil contends that the most important feature of the Marshall Plan was that it worked. Between 1948 and 1951, the U.S. transferred more than $13 billion to the 16 Marshall aid nations and during this time, their investment surged and their industrial output grew by 60 percent.

By the end of 1948, American leaders decided that a North Atlantic security pact should supplement the Marshall Plan. The structure of a new North Atlantic Treaty Organization was assembled by European and U.S. officials and the NATO founding agreement was signed on April 4, 1949. “The Marshall Plan needed a martial plan,” Steil writes.

“The Marshall Plan” is a very good book, driven by a compelling narrative with excellent profiles of complicated, impressive people and institutions. The story is a complex one and the reader must be willing to wade through accounts of intricate European politics, byzantine American bureaucratic infighting and arcane economics.

This is not a book for the beach or a quick flight. But it’s rewarding and instructive. And it’s impossible for the modern reader to study the Marshall Plan and not lament the current state of our affairs. But it is also encouraging to remember that this nation once produced statesmen of the caliber of Truman, Marshall and Vandenberg — and presumably can do so again. Their competence and vision commanded the world’s confidence and persuaded Americans to accept short-term sacrifices for the long-term good. Today, the United States and the world badly need to see contemporary examples of America’s past excellence.