Home The Washington Diplomat February 2010 Stiffed on the Bill? 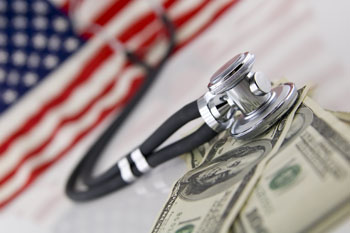 With figures from the American Academy of Family Physicians showing that the shortage of primary care doctors in the United States could reach a 40,000-doctor gap within 10 years, it’s not surprising that both houses of Congress sought ways to promote primary care in health care reform legislation.

What they ultimately decided to do — a decision unpopular with specialists — was to increase Medicare payments to physicians for certain Evaluation and Management (E&M) codes by 5 percent to 10 percent, paying for it by decreasing specialty payments. (E&M codes translate each patient’s physician visit into numbers that are submitted to insurers for payment.)

Primary care physicians typically spend a lot of their time on less “lucrative” E&M codes that involve taking patient histories and conducting physical exams, as opposed to higher-level codes given to complex procedures, tests and surgeries. In that way, doctors and some legislators have argued, the payment system is skewed against primary care providers, leaving them under-compensated for the indispensable care they give.

The primary care incentives made it into both versions of the health care reform bills (no small feat). In both the House and Senate bills, physicians would qualify for the higher rates only if they met the bills’ definition of “primary care provider,” and if their charges for particular E&M services are at least 60 percent (50 percent in the House version) of their total Medicare charges. On the list of primary care specialists are: family practice, internal medicine, geriatrics, pediatrics, and obstetrics and gynecology.

One notable group of physicians was not included in the list: neurologists. That makes sense when you first think about it — neurologists aren’t generalists, they’re specialists. They specialize in the brain and central nervous system. But it’s more complicated than that.

Neurologists may be specialists, but in a lot of ways, they practice more like generalists. When you think of neurology, you might think of cool imaging tools like functional MRI (magnetic resonance imaging) or complex diagnostic tests. But the reality is that most neurologists, like primary care doctors, spend an inordinate amount of time talking to patients. For the best neurologists, their most important diagnostic tools are the physical exam and the patient history — just like primary care doctors. Indeed, neurologists were the only group of physicians who met the first requirement to receive primary care incentives — having at least 60 percent of their Medicare billing in certain E&M codes — but were not included in the list of primary care providers.

It’s not that neurologists think they’re primary care doctors. “We’re not in any way trying to equate neurology to primary care or define neurology as a primary care specialty,” said Rod Larson, chief health policy officer with the American Academy of Neurology. “But neurologists, as a specialty, face many of the same issues as primary care and general internal medicine practitioners on assuring that there are well-trained, available providers to treat the growing demand for our care. And just as a primary care provider needs to spend a lot of face-to-face time with a patient with hypertension or diabetes, so do neurologists working with patients who have Parkinson’s disease, multiple sclerosis or epilepsy over a long period of time. Like primary care providers, neurologists must spend a great deal of time with their patients doing evaluations and follow-up management of chronic disease.”

So the neurologists fought back, trying to get added to the primary care incentives section of one or both bills. In both cases, and despite bipartisan support in the Senate (a pretty rare thing with health care reform), they failed, but they’re still hoping for inclusion in the final reconciled form of the bill — whenever that finally emerges.

All of those things are important, but lost in the shuffle — and woefully under-compensated — is the time spent getting to know the patient. Your doctor doesn’t have to send teams of aides sneaking into your home, like in the TV drama “House,” to find every toxin you might have been exposed to, but he can learn a lot simply by spending half an hour asking you detailed questions that probe beyond the surface of your symptoms. And even if he doesn’t reach a dramatic epiphany about the real cause of your disease, a doctor who’s willing to spend the time getting to know you makes you more comfortable and at ease with your treatment. And that can’t be a bad thing.

When I was diagnosed with breast cancer, I sought care at Memorial Sloan-Kettering Cancer Center, one of the nation’s top cancer hospitals. But the thing I remember most about my care at Sloan is not how advanced it was (although it was excellent), but the time my doctors took with me.

When I’d arrive at an appointment with my medical oncologist (the doctor who oversees chemotherapy), Dr. Catherine Van Poznak would invariably be running late. But I waited without complaint, because I knew why she was late: She was listening to every last thing the patient before me had to say, answering every question, and offering insights and experience. And she’d do the same thing for me when it was my turn. One night, it was 7 p.m. before my husband and I left Dr. Van Poznak’s office. The receptionist was gone, but the doctor had spent over an hour talking with us — an hour that probably wasn’t compensated all that well, as it didn’t involve directly supervising a chemotherapy visit.

That’s the kind of doctor we all deserve, whether in primary care or in specialty care. I think the primary care incentive plan in the health care reform legislation is well intended and will probably do some good. But an even better plan would be to figure out how to better compensate all doctors for doing what they should do best: spending time with their patients, getting to know them, and figuring out what their problems are and how to help them.