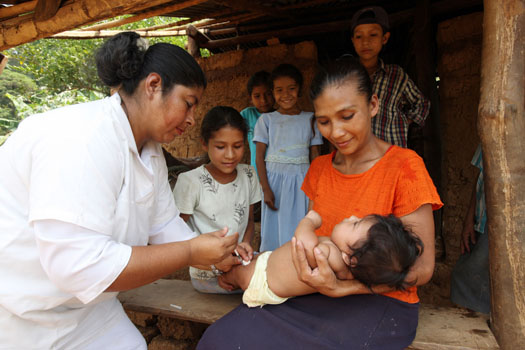 Between now and 2015, a new U.N. campaign aims to keep more than 5 million children from dying of pneumonia — the world’s most aggressive child killer, according to the United Nations Children’s Fund (UNICEF) and World Health Organization (WHO).

The problem is especially acute in the developing world. According to the Centers for Disease Control and Prevention, for every child who dies of pneumonia in a developed country, more than 2,000 children perish from it in developing countries. And even in the United States, more than 1 million children and adults are admitted to the hospital each year with the condition.

Pneumonia, in fact, is the culprit behind about 20 percent of all child deaths worldwide each year — compared with AIDS, which is responsible for about 2 percent of childhood deaths.

Organizers of the billion, six-year plan say that even though 2 million children under the age of 5 die each year from pneumonia, comparatively few resources are focused on conquering the disease compared to other illnesses. Although a considerable price tag, advocates point out that more money has been spent on high-profile diseases such as AIDS — even though children die from complications of pneumonia much more frequently than from AIDS, malaria and measles combined.

“AIDS is more dramatic and it affects adults,” said Dr. John McBride, a pediatric pulmonologist at Akron Children’s Hospital in Ohio. “Infant mortality in the third world countries has always been there. But when you start measuring who is dying of what, it’s pretty obvious that pneumonia in children is a good place to start.”

The three-pronged Global Action Plan for the Prevention and Control of Pneumonia (GAPP) focuses on three areas, directly addressing pneumonia’s strong link to malnutrition and poverty:

• Vaccinating children against diseases that often lead to pneumonia, such as measles and pertussis.

• And treating diagnosed pneumonia patients with the appropriate care and antibiotics.

GAPP aims to slash childhood pneumonia deaths by 65 percent in the next five years and cut the number of severe cases by 25 percent, compared to levels common in 2000, according to the United Nations.

WHO Director-General Margaret Chan is confident the plan will work. “If it is applied in every high burden country, we will be able to prevent millions of deaths,” she said.

More than Medication Vaccinating against diseases that lead to pneumonia and treating the illness with the right medicines and regimens is only part of the plan of attack, say experts in the field.

Educating people on better lifestyle habits is also crucial, according to officials with the Centers for Disease Control and Prevention (CDC). In one example, the CDC worked with WHO, the Kenya Ministry of Health, the Safe Water and AIDS Project and other groups “to encourage the use of locally crafted, low-cost, clean-burning stoves in 10 Kenyan villages,” according to a CDC report. “Unlike the traditional fire pits commonly used in Kenya within the home, the clean-burning stoves contain the fire and help to prevent the release of particulate matter into the air.”

Natives in rural villages in Kenya and other developing nations often use open fires for cooking and heating inside the house, causing family members to breathe in harmful matter — including carbon monoxide and other pollutants — which can eventually lead to pneumonia.

Another CDC study, for instance, examined cleanliness practices in Bangladesh and the direct association between proper hand-washing techniques and the spread of viruses in the slums of Dhaka.

Then there are vitamins and minerals. Akron Children’s Hospital’s McBride said that in addition to immunizing infants against pneumonia whenever economically possible, officials need to focus on nutrition education and assistance. “We need to increase nutritional status, particularly nutrients like zinc and vitamin A, where there’s a higher incidence of the illness,” he noted.

Dr. Maurice Ramirez, an emergency room physician and disaster and terrorism preparedness expert in Kissimmee, Fla., added: “In many of the third world countries, children are malnourished and therefore have less immunity, so even childhood illnesses can lead to debilitating effects from the first illness, and open the door to a secondary illness like pneumonia.”

U.S. Cases on the Rise But what about here in the United States? Pneumonia is often thought of as an “older person’s disease,” but is that true?

Not at all, says McBride, who explained that for the last five to six years, American infants have been given a pneumonia vaccine as part of their regular immunization schedule. “In the United States and Europe, and countries where advanced public health is available, childhood nutrition is much better,” he said. “And now there’s a new pneumonia vaccine given to infants,” which means that U.N. efforts to bring widespread pneumonia immunization to developing countries will likely find some success.

But still, children in the United States are catching pneumonia — sometimes more than once. Gail Youth of Bethesda, Md., knows firsthand that pneumonia is a very real threat to American kids, too. Her 9-year-old son Zachary has had the illness three times in the last year. “Doctors surmised that someone had returned from military duty for the holidays or college, and had spread [the illness] through their younger family members at school,” said Youth.

“He’s never fully recovered since last May,” she added. “He coughs a lot …and he’s been left with asthma, which they think might resolve itself when his lungs have healed — which apparently can take months.”

When her son was first diagnosed with pneumonia, Zack had been suffering from spikes of fever (up to 104 degrees) and severe flu symptoms. “My initial reaction was surprise, but also relief that something could be treated with antibiotics. It wasn’t just ‘viral’ — ‘drink some juice,’” Youth recalled.

“But I was also scared,” she remembered. “I wondered whether this would mean that future illnesses would settle in his chest.… Seems that my fears have been realized, in a way.” Youth plans to take her son to a pulmonologist next, if this third bout with pneumonia goes unresolved.

Pneumonia also appears to be a much more common illness in hospitals nationwide. “We’re seeing a lot of pneumonia this year,” said Ramirez, who, in addition to his work as a Florida doctor, recently authored the newly released “The Complete Idiot’s Guide to Disaster Preparedness.”

Ramirez recently recovered from pneumonia himself. The emergency room physician came down with the illness after his consulting firm was working for weeks on various disaster and H1N1 preparedness conferences. “That’s how I ended up with pneumonia,” he said. “For a while, I never got to go home and never got to rest for three weeks straight … so a simple case of laryngitis led to a complicated pneumonia.”

Ramirez believes pneumonia cases among American children are increasing. “I just finished a nine-day string in the emergency department, and in those nine days we saw about 1,000 people — and of those, about 15 or 16 were childhood pneumonia admissions.”

Ramirez attributes the increase to a worse-than-average flu season and rising vaccine skepticism. “We’re reaping some of the evil of the fact that a lot of parents have opted out of vaccinations” against influenza and the H1N1 virus, he says.

Youth, who has gotten her son immunized against the flu and H1N1 this flu season, agrees, pointing out that germs spread serious diseases like meningitis, mononucleosis and, in her son’s case, pneumonia. “Zack did not catch any of his illnesses from me at home,” she said. “The bulk of his day is spent at school and with children of his age group. That’s where these things were generated.”

Fight for ‘Your Fellow Man’ So how can the average American avoid exposure to pneumonia? “To protect themselves in the United States, the most important thing is getting immunized,” according to McBride.

“There are a population of people who are not convinced [that the flu and H1N1 vaccines are safe], so we need to help people understand that the development of immunizations is probably the single most effective health measure ever developed,” he said.

Youth added: “Families need to be more vigilant to vaccinate their kids, keep them healthy, and when they are not [healthy], keep their children out of school or away from other children until fevers are completely gone and they are no longer contagious. I think it’s common sense and thinking about your fellow man.”

Rima Assaker is a freelance writer in Silver Spring, Md.