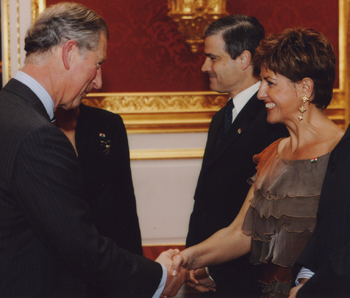 At home in Budapest, she has her own business as an image consultant. Here in Washington, she takes charge of her husband’s closet and loves clothes that bring out the fun in life — but Zsuzsa Szombati, wife of Hungarian Ambassador Béla Szombati, is no lightweight only interested in the superficial trappings.

“I am interested in helping the whole person,” Zsuzsa told The Washington Diplomat. “Of course, what people wear is important because the first impression that most people have is what usually stays in their mind and that includes how you dress. But I like to dress people from the inside out, making sure that what they choose will give the correct impression and fully represent who they really are,” she explained.

“When my husband was ambassador in Paris, we lived in a very fancy neighborhood full of nouveau riche — men dressed from head to toe in Versace or Armani with trophy women on their arms,” she recalled. “But I believe that you only need to wear one or two good things at a time or it spoils the look.”

To that end, Zsuzsa loves to mix elements of sound fashion design — much like first lady Michelle Obama — whereby taste and style are paramount, as opposed to cost.

Where did Zsuzsa’s own sense of style come from? Interestingly enough, it stemmed from the Soviet policies imposed on Hungary during her childhood. “If it hadn’t been for the political climate when I grew up in Hungary, I would have loved to have gone into sales and marketing, but they didn’t exist,” Zsuzsa said. “Everything was owned by the state. I will never forget a Soviet advertisement for shoes. It said, ‘When you need shoes, go to the shoe store.’ Can you imagine? We had three shoe stores in Budapest, but they were all exactly alike and carried all the same shoes because they were owned by the state.”

So the university graduate instead specialized in history and French literature. “I didn’t find a place in the ‘commercial box’ like I would today. There weren’t the professions of sales and marketing or communication; they simply didn’t exist,” she said. “Under communist regimes, it’s only a one-way communication from the top.” 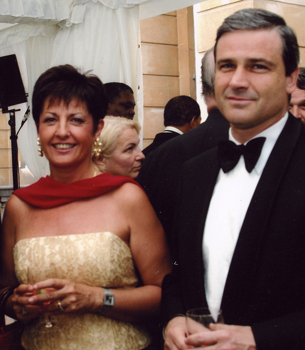 Although she thinks life during Soviet times wasn’t as limited in Hungary as it was in some other Eastern European countries, Zsuzsa (pronounced su-za) said that living under communist rule did teach her valuable lessons that made her “better able to understand why and how we have problems in a world today with all the different cultures.”

She singles out “the creative Hungarian spirit” in helping her country survive under so many different regimes during its long history. “Communism couldn’t break us,” she said. “You can change the political system but you just can’t change people’s minds … we still had the Hapsburg spirit.”

Zsuzsa also credits her mother Ilona and her grandmother for teaching her to enjoy life, no matter what happens around you. “I had a very pretty mom and she loved to entertain and had an eye for fashion,” Zsuzsa recalled. “I’ll always remember the coat she had tailored for me for my 16th birthday. My grandmother was fun and smart too and a great cook. She was born in 1894 so she lived under the time of the monarchy and used to tell me about the Hungary she knew. I lived through her stories of what it was like during the Austrian-Hungarian empire, and I think that gave me a different outlook than many other Hungarians my age.”

Today, as a diplomatic spouse who is constantly expected to entertain, Zsuzsa said she feels lucky to have had this family background and a happy childhood even during the communist regime that stretched over her formative years. “I’m doing now as an ambassador’s wife what my mother taught me to do,” she explained, with a twinkle in her eye. “I want to put more playfulness in life — the world is already too serious.

“I am very realistic with, what you say, two feet, maybe even three feet on the ground,” she added, laughing. “But I believe in taking a lighter approach to life.”

Zsuzsa’s lighthearted outlook (“I’m still a little girl inside,” she says) is a healthy antidote to the crushing demands placed on ambassadors like her husband, Béla Szombati.

“I saw that he was very smart and always a stand-out. His professors appreciated him — he was creative and was the first to ask ‘Why?’ And since his father had been a diplomat, he planned to become a diplomat.”

He has since gone on to serve as head of the Strategic Planning and Information Management Department at the Hungarian Ministry of Foreign Affairs (2006-09) as well as Hungary’s ambassador to the United Kingdom (2002-06) and to France (1994-99).

So what personality traits does Zsuzsa share with her diplomat husband? “My husband and I are both very stubborn,” she candidly admitted, smiling. “But we are stubborn on different issues. He is a man of principle who never compromises; it is difficult to live with a man of principle. And I refuse to compromise when I pursue a goal, no matter what the price, time involved. I wanted a three-bedroom apartment in Budapest, something very unusual since almost all apartments there are one or two bedroom. But, after much searching, I finally found it.”

Zsuzsa thinks that their two sons — 29-year-old Kristóf and 23-year-old Daniel — are a combination of both parents, though they each have their own distinct personalities. 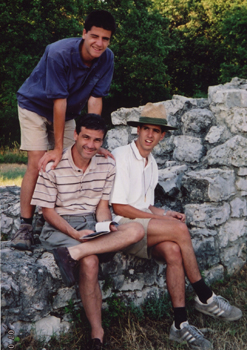 Zsuzsa Szombati, far left, and her husband, Hungarian Ambassador Béla Szombati, left and above, have two sons: 29-year-old Kristóf, who is currently working toward his doctorate in sociology, and 23-year-old Daniel, who is working on a master’s degree in theoretical physics.

“Our older son is just like his father, an idealist and not so practical,” Zsuzsa said of Kristóf, who is currently working toward his doctorate in sociology with a dissertation on integrating the Roma (or gypsy) population into society. “He doesn’t care about making money, having a high, prestigious position, driving a jazzy car, wearing good clothes or being with pretty girls. He is not typical of so many Hungarian youths today who are money-oriented, who missed so many years of fancy trappings they want everything now. I tell him that he better marry some girl from a wealthy family because he won’t earn money with just ideas,” she quipped.

“He cares only about changing the world,” added this proud mother. “Daniel is 23 and he is much more like me but he still wants a fulfilling job. He has a [bachelor’s degree] from Cambridge and is getting his master’s in theoretical physics and wants to work in applied physics for a company like Microsoft or Google,” she explained.

“We lived here before when the boys were little and my husband was cultural attaché from 1988 to 1991,” Zsuzsa noted. “I love Washington and, then and now, love to go to all the museums and art galleries here.”

Although she misses seeing their two sons this time around, Zsuzsa has lost no time reacquainting herself with Washington. Only here a few months, she has already held many dinner parties, embassy events and a huge ladies VIP Christmas luncheon at the residence, introducing herself to all of her guests with a personal handwritten note tucked into the formal printed invitation. Entertaining is natural to this diplomatic wife who has a wonderful new chef at her disposal and relishes making things happen for Hungary in Washington.

“Hungary needs ‘niche marketing,’ just like our great wines need exposure,” she said, citing a recent commentary in the Wall Street Journal about the high quality of Hungarian wines but the lack of marketing for this potentially lucrative export.

“We have small vineyards which produce very high quality wine. We even have our own grapes — Juhfark, Furmint and our most famous, Tokaj –— which are found nowhere else in the world. These unusual but extremely special wines are perfect for wine bars and American and Western European wine collectors, connoisseurs who are tired of chardonnays and cabernets. We are starting to have more wine tours and wine bars in Hungary, but the vineyards need to be promoted. And we need to find different names for them because they are very hard for non-Hungarians to pronounce and remember,” Zsuzsa said, pointing out that Hungary boasts 22 official wine regions.

“We always serve Hungarian wine,” she proudly noted of her own diplomatic events.

Always ready to put Hungary’s best face forward, Zsuzsa suggests visiting her homeland in February for the Hungarian Film Festival, or throughout the summer to enjoy the countryside, or in early September for the 10-day Jewish Cultural Festival of music and dance. “We have world-class spas and mineral springs, famous chefs, and more and more B&Bs where you can rest and feel at home,” she added.

Recently back from a weekend in Palm Beach, Fla., where former U.S. Ambassador to Hungary Nancy Brinker exhibited her extensive collection of Hungarian art, Zsuzsa also wants to remind everyone of Hungary’s artistic legacy, both past and present. She proudly showcases some of the country’s best-known contemporary art on the walls of the residence, saying that, like its wine, Hungary needs to do a better job of branding and marketing its thriving arts culture.

Zsuzsa loves the arts but is personally interested in dance. “I started as a ballet dancer when I was 3, but I hated my teacher and turned to modern dancing. Now I love tap dancing. I’d like to find a good teacher here and I want to see the Washington Ballet,” she said.

This energetic 54-year-old also enjoys swimming and has recently discovered Bikram yoga here. “You exercise in the heat and I love it, but I wonder what happens in May when Washington starts to get hot and humid — maybe I won’t love it so much then,” she joked.

“I still think like I did then, like I’m 25,” Zsuzsa said. “I think that’s why I’m so playful. You can get older but you don’t have to get old in your mind. I think it is my curiosity that keeps me young.”