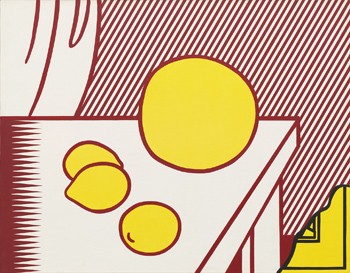 Upstairs in the East Building of the National Gallery of Art, there’s a section of well-lit exhibition space that acts as a sweeping, enlightening survey of 20th-century modern and contemporary art. Kids in particular seem to love it.

On a recent morning, visitors could see a group of second-graders huddled around a painting by Lyonel Feininger, while another similar group was looking up at a Pablo Picasso.

“What do we have here?” their teacher asked. “Triangles,” they all shouted. The teacher in front of the Feininger painting then put it differently. “What’s going on here?”

That of course is the heart and soul of the matter when you’re confronting modern art, especially as it exploded onto the scene in the post-World War II world. You’re always asking, “What’s going on here?”

That’s also the central question at work in the large, exciting and cheerfully iconoclastic exhibition “The Robert and Jane Meyerhoff Collection: Selected Works” now at the National Gallery. Serendipitously, the end of the display happens to be right next to where the second-graders were offering their own thoughts and squeals as to “what’s going on here?” 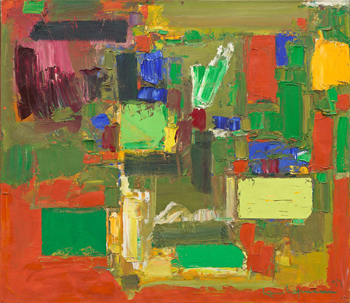 For starters, an impressive collection is going on. Beginning in 1958, when the Meyerhoffs bought Hans Hofmann’s “Autumn Gold,” and for nearly the next 50 years, the Baltimore couple accumulated a collection that contains the essence of American painting in the postwar years, by a group of artists who shifted the balance and focus of the art world from Europe to the United States, in particular to New York.

The Meyerhoffs (Jane died in 2004) also have a close relationship with the National Gallery — this marks the second exhibition from their collection — and their entire collection of 300 works of art will become part of the gallery’s permanent collection.

One of the things this exhibition shows off is the acuity and eclectic taste of the couple, who managed to acquire works that zeroed in on what was important about modern American art, what made particular artists special, what they did and how they did it.

With its 126 paintings, sculptures, drawings and prints, this big exhibition could have been a “greatest hits” of great artists kind of show, which would have made everyone perfectly happy. It certainly would have worked given the all-star effort represented here, including American masters Jasper Johns, Ellsworth Kelly, Roy Lichtenstein, Brice Marden, Robert Rauschenberg and Frank Stella — along with a few other names, like Piet Mondrian, Willem de Kooning, Philip Guston and Mark Rothko.

But there’s nothing casual about how this exhibition is arranged or what the resulting arrangement forces the viewer to do. For that you can thank, or blame, the gallery’s new curator of modern and contemporary art, Harry Cooper, formerly curator and head of modern art at the Harvard University Art Museums. Cooper set about arranging the exhibition around no less than 10 themes — that’s right 10, as if you didn’t have enough to think about.

Lest you think we’re marching through a dissertation that happens to hang on the wall, think again. Cooper, who once taught art to middle school students, has chosen themes that basically reveal how modern art works, how it’s done, where the focus has been, and its various structures and components. He’s centered this approach around 10 visual themes or material devices: scrape, concentricity, line, gesture, art on art, drip, stripe to zip, figure or ground, monochrome and picture the frame. 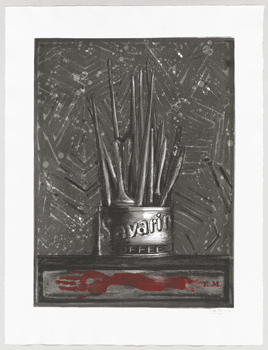 Some of the themes seem familiar and obvious — others don’t. “Stripe” for instance refers to the optically jarring pattern that since the Middle Ages has been associated with marginality, transgression, pollution and revolution — while “zip” is the term famously coined by Barnett Newman to describe his signature vertical stripes. “Monochrome” actually explores the alternative definition of monochrome: no color or no-chrome, as artists such as Kelly, Marden, Rauschenberg and Rothko pushed gray to its tonal extremes of black and white, reveling in the importance of texture and light when color is held to a minimum. “Picture the Frame,” the final category, references the desire to challenge or celebrate the boundary of the edge, mocking and dissolving the need for a picture frame.

And although you might not think there’s much to say about a four-letter category like line, Cooper begs to differ.

“Look at this,” he said during a recent tour. “There’s obviously a lot of thought about this. These works speak to each other, they speak to you and to us, but they comment on each other too.”

With buoyant curiosity, Cooper at times sounds like a barker at a circus that’s got lots of magic and clowns in it. “I’m amazed by the diversity, by the closeness and intimacy of some of these works — of course with Johns and Rauschenberg, that’s literally so. On one wall, you can see their works practically staring at each other, daring each to sort of jump off the canvas and change places,” Cooper said.

“There’s a dividing line here,“ he excitedly adds of the different works and categories. “Pure abstraction — a camp occupied by say Kelly, Stella and others — and those like Johns, Rauschenberg and Lichtenstein who never let go of figurative work and were more content driven. But there’s surprises here, mingling — you can see something in the air. Kelly was as abstract as you can get, but look at that line, how it bends and moves.”

At various times though, you’d think this was a Jasper Johns show with so many of his works represented here. But it’s just that Johns, who had a big exhibition here a few years back, touches on most of Cooper’s themes, so like a bird on a wire, he dangles everywhere.

“Stripe to Zip” may be the most characteristically artsy concept here, with Stella’s thickly brushed work swirling like the cosmos. But the ultimate example is probably Barnett Newman’s “18 Cantos,” complete with 18 panels that move from dark to light yellows to blues to greens, in contrary movements of colors.

“I could have done different categories, arranged them differently,” Cooper mused. “The point is the variety of expression. There’s nothing absolute here.”

With a total of 30 artists, this exhibition and its categories revisit old arguments about abstraction and modern art. Cooper encourages this debate, asking the viewer to “look and think at every turn.”

After all, that’s exactly what the Meyerhoffs did, and what a new generation of little fans seem to be doing today if those second-graders and their triangles are any indication.