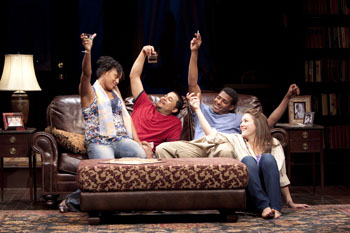 From left, Nikkole Salter as Taylor, Jason Dirden as Kent, Billy Eugene Jones as Flip and Rosie Benton as Kimber star in the Arena Stage production of “Stick Fly” about a wealthy black American family confronting issues of race, class and personal secrets.

The groundbreaking and wildly popular ’80s television comedy “The Cosby Show” centered on a family of affluent, educated black Americans. A subsequent sitcom, “The Fresh Prince of Bel-Air” starring Will Smith, also used laughs to mine issues of race and privilege.

But this ambitious, provocative play is really much more than that.

While “Stick Fly” employs lots of humor to tackle some of the same broad themes as the aforementioned sitcoms, the term “comedy” in this case is misleading. Written by Lydia Diamond and directed by Tony Award winner Kenny Leon, the play is actually a dramedy, and offers much more sophisticated commentary than either of those relatively simple television shows.

“Stick Fly” is insightful in its analysis of race and class, and piercing in its depictions of those painful family dynamics that transcend either race or class.

If the production staggers slightly under an extra helping of melodrama, it recovers with snappy dialogue, an intriguing storyline and an illuminating examination of black privilege. The subject of black privilege is especially appropriate for a Washington-area stage given that the region is, in fact, home to some of the nation’s wealthiest black families. 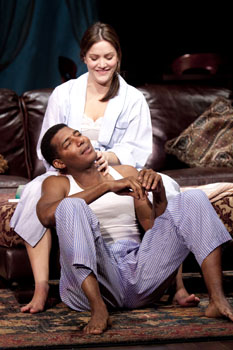 It’s Taylor’s first chance to meet the family. Entering the home, she marvels at the soaring ceilings, luxurious leather sofa and bookshelves filled with hardbound titles, including one by her own father, a distinguished author who rejected her in favor of a second family earlier in her life. “Should I be intimidated?” she asks Spoon.

“Absolutely,” he declares with a smile that leads us to believe he’s only half-kidding.

From the outset, it’s obvious this isn’t just any family.

To start, there is live-in help in the form of Cheryl, a young woman played with delightful charm by Amber Iman. Despite her lower socioeconomic position, Cheryl, as we come to find out, has her head on straighter than anyone else in the play, even though she harbors a dark but thinly veiled secret that comes to light in the second act. In fact, Iman’s acting is among the play’s best attributes. The seeming ease this young actress inhabits her complicated character is beyond impressive.

Next, we meet Flip (Billy Eugene Jones), Kent’s confident and charismatic older brother who soon reveals a secret of his own. He’s dating a white woman, or as he repeatedly puts it, an “Italian” woman — comically suggesting that somehow the darker skin tone is not white.

The patriarch arrives next. Joe LeVay, portrayed convincingly by Wendell W. Wright, is a neurosurgeon brimming with confidence and self-regard, as well as skepticism about Spoon’s decision to become a writer after collecting three divergent graduate degrees.

“The boy is a fuck up,” Joe declares in an aside with Flip, unaware that Spoon is listening.

Joe LeVay is among the play’s most complex characters, a proud doctor and intellectual who hides a jar of pickled pig’s feet under the kitchen sink for moments when he wants to indulge in a bit of soul food. Joe also laments that although he has invested a fortune renovating the family’s Martha’s Vineyard estate, it will never bear his name. That’s because it was bequeathed to him and his wife — whom we never meet — by her father, a member of the original black elite in America and one of the first blacks to own property on the Vineyard.

Finally, we meet Kimber (Rosie Benton), a pretty, preppy, not-at-all Italian-looking woman who would appear right at home with any of the LeVays’ WASP-y neighbors. Kimber, portrayed with skilled comedic flare by Benton, quickly reveals a steely backbone and formidable intellect that belies her sunny exterior.

In fact, the segments of “Stick Fly” when Kimber and Taylor spar fiercely on race and class are among the most intellectually satisfying and provocative moments of the production, even if Taylor’s shrill, self-righteous harangues test the patience of the rest of the cast and ultimately, the audience.

The playwright Diamond has a keen ear for dialogue and she never panders, inhabiting each character with fully realized, nuanced personalities and plenty of smarts.

As mentioned, the script and acting veer into melodrama from time to time, and it’s difficult to accept that the characters would let go of their hurt and hostility so quickly after heated arguments. But the play’s pacing is satisfying, nonetheless.

Meanwhile, David Gallo’s set design is flawless. A Tony Award winner for best scenic design of a musical for “The Drowsy Chaperone,” Gallo expertly creates a seemingly lived-in living room, a kinetic kitchen and even a sleepy back porch all on one stage, without ever changing set pieces. It’s an extremely impressive feat.

A nearly sold-out, multicultural and multiracial audience that gathered for “Stick Fly” on a freezing January night gave the production a warm standing ovation. It was well deserved.