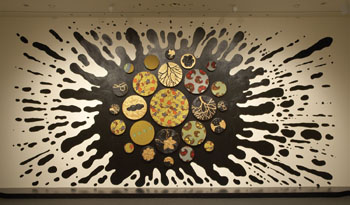 PHOTOS: COURTESY OF THE ARTIST / NATIONAL MUSEUM OF AFRICAN ART

How fun. People of power losing their heads, a king and his court dancing backward, the queen reverting to childhood.

There’s a distinct Alice in Wonderland feel to “Yinka Shonibare MBE,” the otherworldly exhibit spanning two levels of the underground halls in the National Museum of African Art.

Yes, the artist’s works are politically charged. But his witty interpretations of economic disparities, his amusing rewrites of colonial history, and even the quirky storylines of his short films elicit more bemusement than angst or discomfort.

The exhibit covers 14 years in the career of the British-born, Nigerian-raised, English-educated artist, who has so far dabbled in photography, film, paintings and mixed-media installations in which elaborately costumed mannequins take center stage.

Headless mannequins, that is. There are aristocrats caught in secret hedonistic acts, a roundtable of international leaders animatedly staking claims to Africa, and a woman of leisure walking her leashed wild cats. All of them headless. All of them making some statement or another on the artist’s notions of contemporary African identity and the legacy of European colonialism. Even the children —dancing on top of a globe marked with patterns of climate change — have been decapitated. 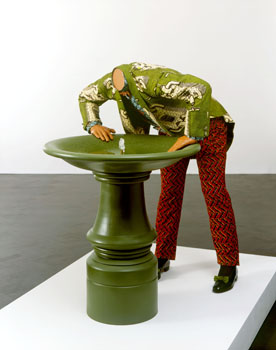 In one particularly striking display, a headless man attempts the impossible task of sipping from a water fountain. The display is as much about the ironic notion of a mouth-less, brainless man attempting to drink as it is a commentary on the inequitable worldwide distribution of potable water and the politics of water fountains and race in America’s history.

This kind of triple meaning is endemic to Shonibare’s works. But what about the headless nature of his mannequins? They are a nod to the beheading of aristocracy during the French Revolution. The boldly patterned textiles? These are a less obvious symbol of the “complex web of economic and racial interactions — and interdependencies — between Europe and Africa,” according to the museum. The vivid materials that Shonibare uses to fashion his elaborate costumes are often associated with African culture, but they are in fact mass-produced Dutch wax fabric that the artist buys at a London market. It’s a tongue-in-cheek reference to Indonesian batiks of the 19th and early 20th centuries, which were similarly produced in Europe before being shipped for trade among West Africa’s powerful elite.

Such idiosyncrasies are on display throughout the exhibit. The cloth used to fashion a woman of leisure’s dress is marked with large colorful clocks, signifying the notion that “money buys time.” In “The Victorian Philanthropist’s Parlor,” the unfitting image of a black soccer player is repeated throughout wall coverings and furniture patterns as a symbol of disparity between the haves and have-nots. Even the artist’s title is an intentionally ironic embracing of an exclusive label bestowed by Queen Elizabeth in 2005 (the MBE that comes after Shonibare’s name stands for Member of the Order of the British Empire).

Shonibare’s symbolism is even more apparent in his photography, which he uses in part to depict the high price of narcissism and debauchery. In a series inspired by Oscar Wilde’s “The Picture of Dorian Gray,” the artist casts himself in the title role of a young man who exchanges his soul for eternal youth. In one of the last photos in the series, we see the hidden portrait of his character as a grotesque old man wizened by a life of debauchery and greed. 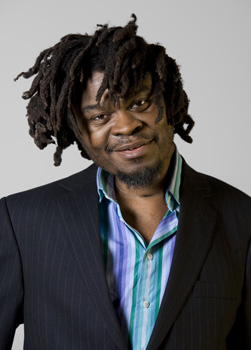 Not familiar with the story of Dorian Gray? The museum’s curators have set up a living room where questions about the artist’s inspirations can be answered by perusing his favorite books, photos and a continuous loop of the 1945 movie. It’s all part of a modern art experience that’s unhurried, enthralling, thought-provoking and just plain fun.