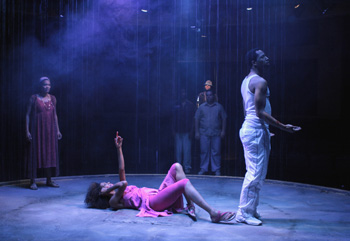 Raushanah Simmons, gives a commanding performance as Oya, a once-budding track star who becomes trapped by both her inability to have a child — and her sexist environment — in playwright Tarell Alvin McCraney’s “In the Red and Brown Water.”

Much ado is being made over up-and-coming playwright Tarell Alvin McCraney, known for his unapologetic portrayals of human struggle in the hood. All the hype is for good reason — his style is distinctive, his message decisive, and his language poetic.

A true minimalist, McCraney virtually uses no scenery or sets. By the omission, he takes a leap of faith and relies solely on his actors’ chops to deliver a mixture of song, poetry and raw dialogue to convey the power of his message.

The Studio Theatre, clearly enamored with the 29-year-old sensation from the Yale School of Drama, has just produced the second play in McCraney’s trilogy “The Brother/Sister Plays.” The coming-of-age tale “In the Red and Brown Water,” directed by Serge Seiden, centers on a female track star whose life falls apart when she renounces an athletic scholarship to take care of her ill mother. The play follows the Studio Theatre’s 2008 production of “The Brothers Size,” which explored the complicated and often painful relationship between male siblings (see “Brothers’ Bond” in the February 2008 issue of The Washington Diplomat). The entire trilogy, which also includes “Marcus; or the Secret of Sweet,” is set in the Louisiana projects pre-Katrina and incorporates Yoruba mythology into its examination of contemporary African American culture.

Credit must be given for McCraney’s bravery. He accurately depicts less alluring segments of ghetto life (that mirror his own painful upbringing) with shameless moral fortitude and bluntness. The result is persuasive and powerful.

But is there a caveat lurking somewhere in this prodigy’s future? There might be.

McCraney is noticeably influenced by the style of his mentor August Wilson, under whom he studied while at Yale. The younger playwright appears to model his trilogy format after Wilson’s literary legacy, “The Pittsburgh Cycle,” a 10-play series depicting the comic and tragic aspects of the African American experience in the 20th century. Both playwrights’ works are also somewhat autobiographical: Wilson’s plays illustrate the steady demise of the Pittsburgh Hill District where he grew up, while McCraney, who grew up in poor Miami, sets his plays in nearby Louisiana. 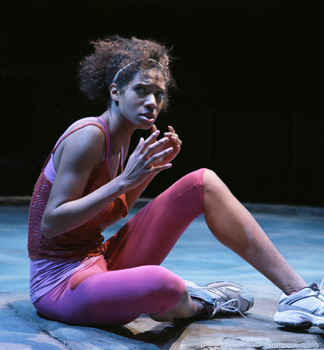 The differences between the two works, however, are conspicuous. The reason could be the price that McCrary pays for ingenuity. While Wilson’s writing inhabits different characters and plot lines from play to play, somehow his genius gives audiences the impression they have merely flipped a page of the same diary when watching each play in his series. McCraney’s “The Brother/Sister Plays” trilogy is less cohesive, despite the fact the plays are all set in the same location (the Louisiana Bayou) and have overlapping characters. Also, all three of McCraney’s plays are set in “the distant present.” While this notion is poetically romantic, it lacks the sense of progression inherent in Wilson’s works. In addition, McCraney’s reliance on minimalist sets fails to link the scripts with a firm sense of place.

But perhaps the most notable and damning difference between McCraney and Wilson is variance in tone. Although Wilson’s scripts are no stranger to violence and tragedy, they uplift the spirit with humor and a sense of undying determination of the human psyche. McCraney’s characters, although unwaveringly vulnerable, would benefit from a visible softer side to enhance audience empathy and avoid their over-simplification.

That said, McCraney tells a poignant story with “Red and Brown Water” — the universal lesson of what happens when you lose hold of your dreams. The tale is told through the provincial life of Oya (Raushanah Simmons), a youthful track star who rejects an athletic scholarship to the state university to stay with her dying mother (Denise Diggs). After the mother’s death, Oya focuses on her inability to have a child — one of the few status symbols for a female in her Southern project development.

McCraney, whose works are steeped in folklore, compares Oya to Aphrodite, the Greek goddess of love, beauty and sexual rapture. The play is also patterned on Federico García Lorca’s “Yerma,” a 1934 play that tells the story of a barren woman living in rural Spain, whose desperate desire for motherhood drives her to commit a horrific crime. Oya, a prisoner of her passion, isolation and frustration, also fails to escape the trappings of her sexist and oppressive environment. 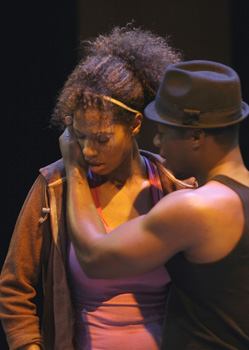 Simmons — although she has the long limbs of a runner and conveys the believable naiveté of the play’s tragic hero — lacks the needed athleticism that would give her role more credibility. Diggs as Oya’s long-suffering mother — whose wisdom and perspective tragically leaves with her death — is less distracting and consequently lends more believability to the story.

Luciana Stecconi’s set is a bare, concrete circle surrounded by a narrow channel of water, while Eric Shimelonis’s original music emanates from a DJ on the periphery of the stage. Both create a no-nonsense, brash reality for the events to unfold. However, as with the lack of character variance, this starkness could use more dynamics. A British production of “Red and Brown Water,” for example, depicted the ever-present murky waters of Oya’s emotions by literally flooding the stage. A bold decision such as this would have reinforced the fable quality of McCraney’s work and better matched his characters’ quirky habit of announcing their stage directions in addition to their lines.

But make no mistake: McCraney’s work is a potent force to reckon with. He has yet to reach 30 years of age and has already reached high notoriety. As time passes and his perspective widens, the muscle of his labor will undoubtedly adopt a wider resonance, adding to his early success.