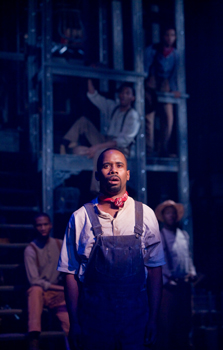 Signature Theatre’s truncated adaptation of the sweeping American classic “Show Boat” might be viewed by some as a wrong turn on the great Mississippi River (which carries the play’s floating entertainment ship Cotton Blossom).

They might say the production is a scaled-down version of a masterpiece whose popularity rests on its grandiosity — as seen through the lives, loves and heartbreaks of three generations of show folk on the Mississippi. In fact, Signature’s 14-member musical ensemble is a far cry from the full orchestra used in the show’s 1927 premiere in the Ziegfeld Theatre on Broadway.

But for those who require more from theater than tradition, this production’s package of bittersweet Americana, timeless history lessons, and some of the most celebrated songs ever to grace the musical stage won’t go unnoticed. It also doesn’t hurt that its staging in an intimate 276-seat theater means there’s not a bad seat in the house.

Appreciation of Signature’s reinvention of what is known as “the first great American musical” is particularly important for a newer generation of audiences, according to Artistic Director Eric Schaeffer, who notes that “Show Boat” was “the first musical ever to deal with real social issues, politics and family dynamics, examined over the course of five decades of a changing American landscape.”

Social issues have a way of enduring throughout history, which makes the script still pertinent today. “Show Boat” had been criticized in the past for its blatant exposure of racial tensions, which were particularly high during the play’s era and landscape (the deep South in 1887 to the roaring 1920s in Chicago). It may no longer be a criminal act for a black to marry a white, as it was for the play’s character Julie (a mulatto who was passing for white) and Steve (who swallowed Julie’s blood so he would have at least “one drop of black blood in him” to legalize their marriage). Yet even today — in the Obama era — racial tensions still rear their ugly heads.

What also endures is the play’s haunting contrast of lasting love and cruel prejudice, as well as the genius score by Oscar Hammerstein II and Jerome Kern, who created unforgettable songs like “Ol’ Man River” and “Can’t Help Lovin ’Dat Man.”

All of these elements still shine through in this latest, scaled-down rendition. Although James Kronzer’s set design is barebones — a wooden platform for the boat with ladders to an upper deck that is situated in front of the screened orchestra — its minimalism forces the audience’s imagination to take over. In the opening scene, “colored folk” (changed from the “n” word in earlier versions) create an imaginary field as they pick cotton off the stage floor. Water sound effects signify the Mississippi River, and momentary visual cues announce the passage of decades and changes in locale — Natchez, Miss., Chicago, and Greenville, S.C. 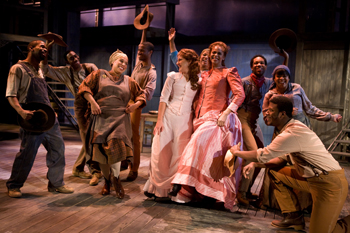 The show’s music and vocals are so strong that the visuals aren’t missed. This is especially true when Gaylord Ravenal, the leading man, played by Will Gartshore, walks onstage. Gartshore’s strong, clear singing effortlessly glides over the vocal range demanded by his part, which uses higher harmonies in the hit “Make Believe,” a lyrical duet he sings with the ship captain’s daughter, Magnolia. His dashing physique also makes it easy to believe he’s a handsome riverboat gambler.

The characters of Queenie, the ship’s main “negress” worker, and Cap’n Andy, are consistently on top of their game. They never break character and keep the audience firmly footed in the time period of the play without becoming caricatures. Andy, played by Harry Winter, resembles the mannerisms and features of Mickey Rooney, who played Cap’n Andy at the Kennedy Center in 1983. Queenie (played by Delores King Williams) shines with the somber “Mis’ry Comin Aroun,’” a number reintroduced by Signature that was cut from the play’s original production. A dancing highlight is Bobby Smith’s (as one of the ship’s entertainers) solo tap routine.

The rest of the cast is uneven when balancing acting and singing abilities. The good news is that where one cast member falters, another quickly raises the bar. Stephanie Waters as Magnolia, Andy’s impressionable daughter and Gaylord’s love interest, is gifted with the voice of a songbird, but could use some coaching in the acting department. Kimberly Schraf, as Parthy, the captain’s puritanical wife, acts her socks off but almost talks her way through her part in the duet “Why Do I Love You.” Duke Ellington graduate VaShawn McIlwain’s rendition of Ol’ Man River is powerful, but his character (as Joe, Queenie’s husband) at other times fades into the background, relying on Queenie to carry the scene.

Although “Show Boat” is at times corny, it contains enough brilliance to override tendencies toward mawkish sentimentality. Of course this production would be more sensational on a mammoth stage with miles of scenery. But for those who miss the extravagant excess of earlier productions, one need only to “make believe” here and their journey is guaranteed to be a smooth one along clear waters.