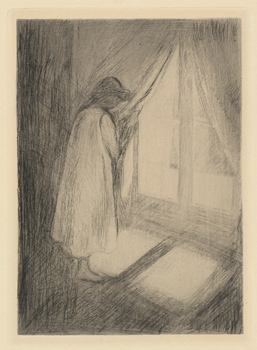 On the surface, that seems to be the only thing the two shows have in common, but that’s not quite true.

While the two exhibits seem to be separated by general interests and time — the National Gallery display focuses primarily on the middle to late 19th century, while the National Museum of Women in the Arts (NMWA) features contemporary art — they share certain qualities that are suggestive of, and tend to induce, intimate viewing.

Conundrums, codes, secrets, darkness and privacy are all words that invite viewers to interpret and reference their own personal, hidden experiences. The works in both exhibitions suggest this is what we’d be viewing if we were alone, or with like-minded co-conspirators, so to speak. They dare us to look at subjects, memories and images that are not usually part of public conversation. They are complicated works, sparking contemplation.

“The Darker Side of Light” at the National Gallery illuminates the private worlds of late 19th-century Paris, London and Berlin through some 120 beguiling, often enigmatic prints, drawings, illustrated books and small sculptures. These works seem to reveal three things about the era: the collecting habits of certain connoisseurs who kept their treasures under wraps, only viewing them in private; the artists who satisfied their needs as well as their own shared interests; and an intellectual, social and cultural atmosphere in the Victorian period that tended toward morbidity and melancholy.

“Telling Secrets” at NMWA does something similar by presenting work from a diverse group of artists (a characteristic of “Darker Side” as well) who either created literal layers in their artwork (as in a collage), applying various levels of abstraction or adding text, or metaphorically layered their work by incorporating evocative symbols such as tattoos, masks and veils. Both approaches encourage the viewer to look underneath the works, to interpret them after the first glance, and to embrace some of the stranger results.

One other common quality that both shows share bears mentioning. It has nothing to do with the content, but rather with how the exhibitions were organized, which says a lot about the current economic woes confronting cultural institutions. Both exhibitions were created entirely from the permanent collections of the museums. In the case of NMWA, a museum with a relatively short history, this says something about the impressive growth of its collection. For the National Gallery, “Darker Side” is one of two major recent exhibitions built solely from works in the permanent collections. Grants and private giving being harder to come by in the present economic climate, the creative use of exhibitions built from in-house collections sidesteps the often huge costs of shipping, insurance and legal issues involved in borrowing from other institutions or collections.

In any case, the “Darker Side of Light” exhibition is the much larger show, and it’s no slouch when it comes to big-name artists either, a tribute to the gallery’s huge collection of prints, etchings and drawings. There are some 120 items here — a morbid parade of despair, obsession, possession, abjection, violence and death. All the works, to one degree or another, have a wounded quality about them, and the people who collected them it might be fair to guess. 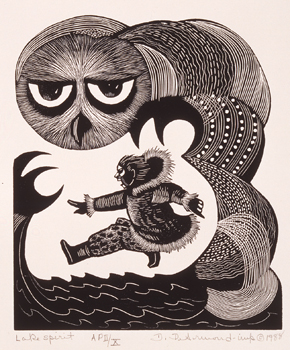 PHOTO: NATIONAL MUSEUM OF WOMEN IN THE ARTS

These collectors clearly shared interests that were not easily spoken of in the open — the print of a sick child, or a large drawing of death holding sway, the devil at his side — so instead they discreetly took these somber reflections on the human existence into a drawing room or some other private place where family members had to knock before entering.

Now we get to see them out in the open, in all their glory: the moody landscapes of Adolph Appian, François Nicolas Chifflart’s ruminations on the Paris cholera epidemic, Käthe Kollwitz’s socially neglected women, and the angry, supremely manic-depressive works of Edvard Munch and Edouard Manet contemplating the devastations of the Franco-Prussian war and its aftermath. Who knew Manet could be so mordant, but in his drawing of the absinthe drinker, we see the favorite drink of the sad, suicidal and the bankrupt, both of money and life. Even Victor Hugo is here, as if it weren’t enough to have written something called “Les Misérables.”

All the European bad dreams are represented — biblical, apocalyptical or darkly intimate — pondering disease, the death of children, gargoyles, oppressed peasants, the sadness that sets in at dusk or the loneliness of a lone tree in a vast vista of graveyards.

I’m not sure what the collectors thought when they looked at this. Perhaps it was an affirmation of pessimism that couldn’t be admitted in public. Whatever the thoughts, the work outlasted the moods of its initial viewers.

“Secrets” trades in things that are hidden, but here too there is a disquieting, almost tragic sense of storms brewing. We see this in pieces like Melissa Miller’s “Broken Wing,” Dale De Armond’s “Lake Spirit,” Robin Kahn’s clever yet threatening “Victoria’s Secret” and Alison Saar’s “Snake Man.”

“Secrets” is more eclectic, and a bit more buoyant in its spirit and energy, though the works echo the menacing enigma of “Darker Side.” Perhaps those 19th-century collectors thought they knew everything there was to know about the worst of humanity, having seen plagues and warfare, and so they stared straight ahead into that dark abyss— unlike their contemporary counterparts, who recognized that the abyss was open to multiple interpretations. Either way, it’s not exactly a pleasant, sunny journey, but an enlightening one nonetheless.