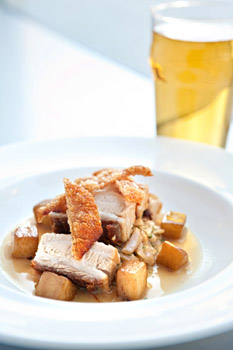 For some dishes, they hone closely to classic preparations, such as with the fish and chips. The fish — coated and perfectly deep-fried to a prefect golden brown — is satisfyingly greasy and served with respectable chips and “mushy” peas, though the peas are really brilliantly green and pack quite a bit of texture. It’s not exactly traditional on that point perhaps, but much more tasty. Bangers and mash are straightforward as well, with whole grain mustard mash and onion gravy.

While the fish in the fish and chips may be of the no-name variety, the salmon at AGAINN has a distinguished appellation. Morton uses Loch Duart salmon produced by eco-protective practices on the northwest tip of Scotland. The salmon is noted for being more similar to wild fish than other farm-raised varieties because of the aquaculture practices. Here, the lean and deeply colored dish is striking as a tartare accented with paprika, preserved lemon and raw quail egg. A roasted version served with roasted beats, beet green and horseradish crème is even more satisfying. Native rockfish, meanwhile, is elegantly prepared with a spicy lobster broth and served with winter vegetables, spinach and preserved lemon.

Not a fish person — try the steak and chips. A lean strip of hanger steak is paired with a marrow bone cut lengthwise, topped with a parsley mixture and grilled. It’s hard not to feel a bit like Fred Flintstone when the thing arrives, and the bone certainly makes a nice treat to take home to Dino after you’ve scooped out the meltingly rich marrow.

The menu also offers hearty meat dishes that you would expect from the culinary pub-based tradition. The Lancashire hot pot of braised lamb shank, roasted turnips and pearl onions was the perfect thing to eat while watching the first snow of the year fall outside the restaurant’s huge windows looking out onto 11th Street. For the more adventurous, braised pork belly is served atop a nice mix of heirloom apples, cabbage and thin strips of crackling. 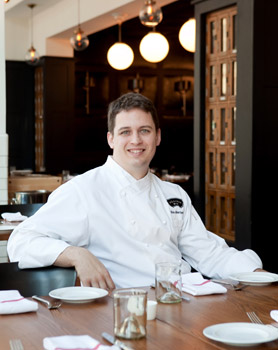 AGAINN executive chef Wes Morton cooks up hearty meat dishes that hone closely to the restaurant’s culinary pub-based tradition, as well as twists on traditional preparations of fish and chips, bangers and mash and other comfort-food favorites.

And then there are the puddings. While many English pubs neglect one of the finer aspects of English cuisine, dessert is taken very seriously at AGAINN. The team has put together a selection that includes old-fashioned delights such as sticky toffee pudding with a rich toffee sauce and startling stout ice cream, as well as an apple custard tart made of caramelized York apples and almond pastry cream, accented with vanilla ice cream. A trendy newcomer, the sticky and sweet banoffee pie — featuring bananas, toffee, graham biscuit, cream and ganache — also makes an appearance. Other highlights include the whimsically named chocolate puddle pudding — a warm chocolate cake sitting in a pool of chocolate with chestnut glace — and the Eton mess, a combination of huckleberries in syrup, tiny baked meringues, and sweet yet tart lemon curd all served in a mason jar. For simpler tastes, AGAINN’s ice creams are a must-try just for their unusual flavors: rum-roasted banana, brown bread, calvados, and crème fraiche, which tastes like sweet frozen buttermilk but is unexpectedly and delightfully refreshing.

CORE designer Peter Hapstak, perhaps inspired by the sleek new building space in which AGAINN resides, has taken the dark woods and rich leathers of a classic English pub and married them with stark white subway tiles and glass globe light fixtures to create a gleaming mélange that defies categorization but is certainly nice to look at.

AGAINN is already a popular destination, with little space at the 18-seat zinc-coated bar that runs along the back of the restaurant. And therein lies one of the problems with AGAINN: The acoustics are bad. Though the high ceilings and stark walls and floors offer an elegant backdrop for dining, there is little to muffle the sound. Even a half-full bar of boisterous patrons can create a distracting din in the eating areas that are separated only by a row of booths.

Part of AGAINN’s popularity is probably due to its beverage program, under the able direction of Elli Benchimol, who until recently served as wine and spirits director for Stir Food Group, a position that put her in charge of the excellent cocktail program at Zola and Spy City Café.

AGAINN’s program includes an extensive beer menu with many unusual choices from Scotland, Ireland and England. More than 40 bottled varieties and 15 drafts are available. Being a pub-based concept, AGAINN not surprisingly also features whiskies — lots of them. More than 80 varieties in fact, including 47 different Scotches. To entice regulars, AGAINN even rents out glass-fronted wooden scotch lockers where patrons can store their own bottle purchased from the restaurant.

Less typical of the pub environment, but a nod to the ever-expanding cocktail culture, AGAINN offers a series of unusual concoctions created by San Francisco-based Bon Vivants, the beverage consulting team of Scott Baird and Josh Harris. Bringing a West Coast aesthetic to their creations, the duo has created drinks that, like the food, focus on local seasonal ingredients and depend on house-made tinctures, syrups, sauces, creams and powders, such as a vanilla-rooibos tincture, madras curry powder, and scotch bonnet sauce. Choose from updated versions of old favorites like the Bull Shot (dubbed the Irish Bull at AGAINN), a potent concoction of Boru Irish vodka, beef stock, Heinz Original Brown Sauce, celery salt, lemon, house-made scotch bonnet sauce, fresh horseradish, coriander, all-spice, salt, sumac and a house-pickled carrot (why eat when you can drink your meal?). 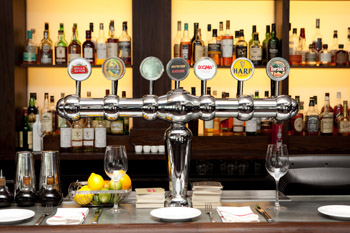 Based on the popular gastro-pub model, AGAINN offers classic English pub preparations expertly made with locally sourced, sustainable ingredients, complemented by an extensive beer menu that includes more than 40 bottled varieties and 15 drafts from Scotland, Ireland and England.

While the quality of the food and the price tend in the gastro direction, the service is, unfortunately, more on the pub side. Perhaps it’s because they are new and not all of the front-of-the-house issues have been worked out, but some of the staff have been ill prepared to answer questions about the menu and seem a bit confused about customer service (and despite the fact that the water glasses are refilled after every sip, you may have to wait awhile for a cup of coffee).

And therein lies the dilemma in this particular concept. Pubs are by their nature usually loud, friendly, affordable places not typically patronized for their food or their service. The price point necessary to deliver the types of gastronomic improvements that AGAINN offers (evidenced by the truly superb celery root soup and potato dumplings) move a restaurant right out of the pub range and into one where superior service is an expectation. Attempts to reconcile the two forces lead to an uneasy marriage. Other such ventures in the area have reverted back to straight pub mode with some creative copy on the menu. It will be interesting to see how AGAINN fares in this still experimental concept of blending a low-key pub persona with high-flying culinary ambitions.