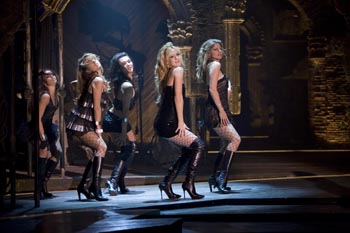 The first film directed and choreographed by Fosse, 1969’s “Sweet Charity,” was adapted from Fosse’s Broadway stage musical of the same name, which in turn was based on “Nights of Cabiria,” the 1957 film directed by Italian auteur Federico Fellini. It’s pretty rare for any film — let alone a non-musical, in Italian, and a classic by Fellini — to be transformed into a Broadway musical and then turned back into a movie as a Hollywood musical.

After 7 1/2 films (counting shorts and an anthology project), Fellini himself had a major creative block trying to develop his next movie. So he turned lemons into lemonade by making 1963’s “8 1/2” about just that subject. Fellini’s alter ego Guido (played by Marcello Mastroianni), a successful celebrity director, struggles to live up to the high expectations for his next movie. His “director’s block” is exacerbated by his problems dealing with the people surrounding him in his professional and personal life. Ranked as the third best film of all time in a 2002 poll by the British Film Institute, “8 1/2” has left a legacy of lasting influence — both on the big screen and on stage. In fact, Fosse’s 1979 musical film “All That Jazz” has a story inspired by “8 1/2.”

Note that classifying “Nine” as a “Hollywood” musical means the modern cinematic definition, which in this case encompasses an million U.S.-Italian co-production from the independent American studio the Weinstein Company and partners — shot somewhat in Italy (including Rome’s legendary studio Cinecittà where “8 1/2” was filmed) but mostly in England, which was cheaper.

The star-studded, international ensemble cast includes Daniel Day-Lewis (U.K.-Ireland) as Guido, Marion Cotillard (France) as his wife Luisa, Penélope Cruz (Spain) as his mistress Carla, Nicole Kidman (Australia-U.S.) as his muse/leading lady, Judi Dench (U.K.) as his costume designer, Kate Hudson (U.S.) as a journalist, Sophia Loren (Italy) as his mother, and Fergie (U.S.) as a prostitute he remembers from his youth. The six non-Americans (including Kidman) have all won acting Oscars, and Hudson has been nominated. Needless to say, the talents are generally impressive even if some parts are pretty small.

Day-Lewis isn’t the best singer, though that’s a minor problem. The gifted actor effectively portrays Guido as an exhausted rogue, but unfortunately the character just isn’t particularly likable. In the original “8 1/2,” Guido is a frustrated mischief-maker who still manages to be lovable despite all his faults. (Mastroianni perfected a similar character type often throughout his career.)

In “Nine,” the gorgeous cinematography, art direction and costume design make it a treat to watch even if Marshall’s adaptation is still a bit too stagy, especially the musical numbers. The choreography is dazzling, the singing is good, but the songs (some of which weren’t in the original Broadway musical) aren’t particularly memorable. The transitions between musical and dramatic scenes are also a bit jumpy, fragmenting the movie’s flow and pacing.

Some auto thieves will strip a stolen vehicle for its parts because they’re worth more individually than the intact car. Many pieces of “Nine” are technically proficient, but the whole film lacks soul — adding up to less than “8 1/2.” 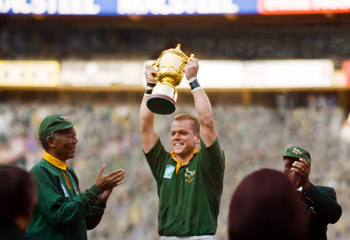 American icon Clint Eastwood, now 79, may always be best known for the highly visible tough guy image chiseled early on in his career as a movie star (notably in 1964’s “A Fistful of Dollars,” 1971’s “Dirty Harry” and their respective multiple sequels), a profession in which he claimed to make his swan song in 2008’s “Gran Torino.” Thank goodness he’s indicated no plans to discontinue his steady work behind the camera, which has proven to be a legacy just as enduringly important as his presence on screen. It might surprise even hard-core cineastes to know that since 1971, he’s helmed a film just about every year or two. Along the way, he’s become one of the most dependable directors today, not just in quantity but also in quality.

Eastwood’s critical reputation as a filmmaker was cemented with 1992’s unconventional western “Unforgiven,” for which he won Oscars for Best Director and Best Picture (as one of the producers). He duplicated the double victory for 2004’s “Million Dollar Baby.” Venerable American actor Morgan Freeman played key roles in both “Unforgiven” and “Million Dollar Baby,” winning Best Supporting Actor for the latter.

For “Invictus,” director-producer Eastwood reunites again with actor Freeman. Does this mean it’s Oscar time again? Well, neither appear to be frontrunners in the crowded Oscar races, but they’re certainly in the scramble for nominations. Eastwood’s 30th feature as a director doesn’t disappoint. His chances are probably best as a producer in the Best Picture category, which is being expanded this year from five to 10 nominees. Freeman meanwhile makes a stirring bid for Best Actor by eerily evoking the well-known public persona, both physically and vocally, of Nobel Peace Prize winner Nelson Mandela.

In 1994, Mandela is elected president in South Africa’s first multiracial elections. After years of international boycotts against South Africa — that pressured the end of apartheid — the country is re-establishing its international relations, including trade and athletics.

Mandela knows that the world’s eyes will be on South Africa, especially when it hosts the 1995 Rugby World Cup. The Springboks, the national rugby team beloved by the white Afrikaner minority, have long been despised as a symbol of apartheid by the long-suffering black majority. But Mandela unexpectedly throws his full public support behind the team, captained by Francois Pienaar (American Matt Damon), in its underdog quest to win the tournament. Despite suffering nearly 28 harsh years as the world’s most famous political prisoner, Mandela is ready to forgive his former oppressors in an attempt to unite his fledging nation.

In Love With ‘Young Victoria’ 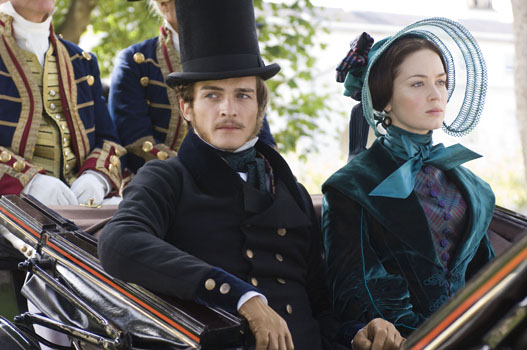 Rupert Friend, left, and Emily Blunt portray the lengthy courtship and love between Queen Victoria and her patient German suitor Prince Albert in the lavish costume drama “The Young Victoria.”

With scant trace of the frowning scowl made iconic by later images of the older Queen Victoria, the 17-year-old Victoria is a sexy teen, though still appropriately demure and warmly played by pretty English actress Emily Blunt (“Sunshine Cleaning,” “The Devil Wears Prada,” “My Summer of Love”). A significant focus of the film is the budding romantic courtship with her patient German suitor Prince Albert, handsomely portrayed by English actor Rupert Friend (“The Boy in the Striped Pajamas”). With straightforward plot and dialogue, the script penned by English writer Julian Fellowes explains the young couple’s thoughts as well as the political machinations surrounding them.

At 17, Victoria is heir to the crown held by her aging uncle, William IV (Jim Broadbent). Despite being weakened and bed-ridden with illness, Victoria firmly resists an attempt by her mother, the Duchess of Kent (Miranda Richardson), backed by the scheming John Conroy (Mark Strong), to usurp Victoria’s powers by forcing her to sign a document appointing her mother as regent until Victoria reaches the age of 25. King William, who adores Victoria and hates the Duchess of Kent, just manages to survive until Victoria turns 18, at which time a regent no longer needs to be appointed. As the inexperienced queen, Victoria is mentored by the charismatic Whig Prime Minister, Lord Melbourne (Paul Bettany), who at one point freely admits that he truly has his own best interests at heart. Their close relationship causes the press to deride her as Lady Melbourne. But her true love is Albert, who eventually becomes her spouse and partner in life and leadership.