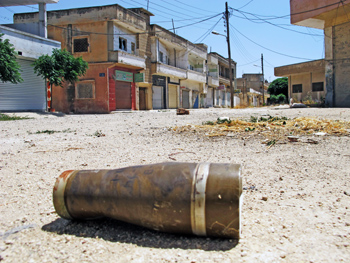 In the non-descript town of Qatana, 15 miles southwest of the capital Damascus, Christian families are cloaked in fear.

In late October, Father Fadi Haddad, a Christian Orthodox priest and leading member of a community of around 100 families, was abducted when attempting to pay the 50 million Syrian pound ($700,000) ransom demanded by unknown men for the release of a local Christian dentist who had been kidnapped earlier in the month. Christians in the town have said “men with beards” — a parochial reference to Islamic jihadis — were responsible. Other Christians in Qatana fear they may be next to disappear.

Syria’s uprising-turned-civil war has flamed sectarian and religious animosity that had been tamped down by an iron fist for four decades. The country is home to Sunni, Shiite, Druze, Ismaili, Christian and Alawite faiths, as well as numerous other ethnic minorities. As such, the violence and tenacity of its revolt is, perhaps, unsurprising. Seventy-five percent of the population is Sunni Muslims. Sunnis also account for the majority of the rural poor, and they were the ones who started out protesting against President Bashar al-Assad’s Alawite rule and who have taken up weapons to oust the dictator.

Following a heavy attack in June, a shell lays in the middle of a desolate street in Homs, a hotbed of Syria’s uprising, which is now dragging into its 20th month.

Through cunning strategy and brutal violence, both Bashar al-Assad and his father, Hafez, succeeded in holding this largely synthetic identity together until the outbreak of revolt in March last year.

From the outset of the revolt, the regime’s media arm sought to reel in minority communities by staging interviews and talk shows with leading Christian and Shiite clergymen. The government was to reassure minority groups that their own religious leaders stood with the regime, and so they should, too.

At night, civilians in Alawite districts around the country were armed with machine guns by state militias and told to watch out for strangers in their neighborhoods and towns. A heightened sense of both fear and loyalty to Bashar al-Assad was instilled in this community during the early days of the uprising.

Furthermore, as Alawites dominate the state’s military and security sectors, non-Alawite Syrians saw those driving government vehicles bearing effigies of the president as Alawites. As such, Alawites were identified in both political and religious terms — as supporters of the regime and loyal subjects of Assad.

Increasing religious divisions are not the sole obstruction to future peace and stability in Syria. People living in Syria’s urban centers — particularly those from notable families in Aleppo and Damascus — see themselves as having little in common with those from the countryside.

Living in apartments regularly worth millions of dollars, the urban middle class speak two or more languages, dine in expensive restaurants, travel to Turkey and Europe, and identify little with their fellow country men and women, the protagonists of the ongoing revolt.

These urbanites have not experienced the regime’s brutality because they have not opposed it — they have no reason to; they fear their homes losing market value and the uncertainty that accompanies revolt. They curse the revolutionaries who have brought checkpoints, traffic jams, electricity outages and fear to their streets. They see the protestors as uneducated and uncultivated, and want little to do with the change the rural communities are attempting to enforce.

But the rebels and protestors must physically take control of the major cities in order to oust the regime, and one of the main reasons this episode of the Arab Spring has continued for so long is because the urban populations will not assist the revolutionaries. As a result, the violence will only increase.

Syrians supporting the revolt are also divided by the figures and personalities in the Syrian political opposition. Many protestors — risking their lives to march in the streets of Daraa and Homs — are sharply critical of the opposition leaders who appear on satellite television each evening complaining about the lack of international intervention from the safety and comfort of Istanbul, Cairo or Washington, D.C.

The few Syrian Christians who have joined the political opposition have been disowned and denounced by their co-religionist civilians. George Sabra, a leading member of the opposition Syrian National Council who is also from the town of Qatana, is hated by Christian families there.

The revolt’s fundamental aim has also split opponents of the current regime. Some are divided over whether the uprising should remain peaceful or if arms and weapons should be used to bring down Assad. Some argue over whether help should be sought from the governments of Saudi Arabia, Qatar and perhaps the United States. Others want the revolt to be a strictly Syrian affair — won by Syrians for Syrians — so that when Assad is finally defeated, no outside force may lay claim to political life in the new Syria.

But it is the seemingly trivial divisions, disagreements between friends who continue to support and oppose the regime, that stand in the way of achieving long-term stability in Syria.

In Qatana last spring, a 14-year-old Christian boy returned from school with a scratched arm after scuffling with another student. The schoolyard fight took place over each other’s support and opposition to the Assad regime. At anti-government protests, children hold flags and chant support for the Free Syrian Army, too young to understand their own words.

Divisions among a new generation of Syrians — neighbors, colleagues and friends — is perhaps most troubling for the country going forward. Armed Assad-backed gangs and militias are likely to hang around long after the president and his family are driven from power. These armed Alawite elements are likely to continue to violently oppose any new political authority that has usurped their power and could potentially seek retribution against them.

As more Syrians die, divisions will deepen, fraying the chances of re-establishing a functioning social fabric in the future. If and when the Assad regime falls, Syrians will be forced to face one another and confront the differences that have torn them apart head on. Whether they do so constructively or not will color and shape the Middle East for decades to come.

Stephen Starr is a freelance journalist and the author of “Revolt in Syria: Eye-Witness to the Uprising.” He lived in Syria from 2007 until earlier this year.