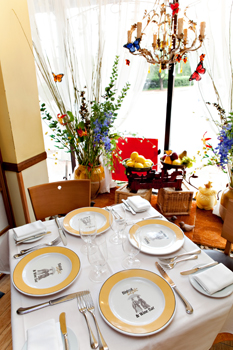 In the far reaches of Georgetown on Wisconsin Avenue, Bistrot Lepic and Wine Bar, one of the city’s not-so-well-kept secrets, is celebrating 15 years of treating Washingtonians to a little bit of Paris without the jet lag. The brainchild of French chef Bruno Fortin, Bistro Lepic opened in 1995 in a part of Georgetown that only residents doing their grocery shopping were likely to visit. Fortin could hardly have imagined how quickly his little spot, named after a street in Paris, would become a prime destination for diners all over the area as well as from out of town. Nor could he have foretold how long and how much it would reign over, and to a certain extent usher in, the city’s culinary transformation.

Despite 15 years of popularity, Bistrot Lepic has wisely limited its expansion and maintained its consistently superb French menu so as not to dilute the charm of this cozy Georgetown eatery.

The factors that have made Bistrot Lepic such an enduring success are the same that jettisoned it to instant popularity when it first opened. The food is, and always has been, superb. Many of the current dishes are virtually unchanged since Fortin opened — and with good reason. Some things are hard to improve. Beef medallions are still served with polenta and shiitake mushroom sauce. A perfect combination, the beef is tender and the polenta rich, with just a bit of texture, while the sparingly applied shitake mushrooms add a meaty accent to both. The salmon, too, is a familiar favorite, with thick filets ingeniously wrapped in a crispy crust of finely shredded potato and garnished with fresh grapes and ouzo sauce.

Hors d’oeuvres include classics such as homemade country pâté with prunes and Armagnac, as well as onion tart with bacon and baby green salad. A smoked trout salad with grapefruit is a refreshingly light choice, while the beet and farm goat cheese terrine served with baby greens and balsamic dressing is a delicious interpretation of a terrine, with the cheese stuffed inside the beets rather than in a loaf. Perhaps best among the starters though is the shrimp risotto, where an unusual lemon-lime addition to the mix creates a vaguely tropical (and very delicious) profile to the dish that enhances the shrimp significantly.

The food is, of course, a function of who is in the kitchen. Though Fortin is no longer at the restaurant on a regular basis (he splits his time between Bali and Paris), his vision is admirably sustained by managing partner and co-owner Cyrille Brenac, as well as chef de cuisine Simon Ndjiki-nya. Cameroon-born and Paris-raised, Ndjiki-nya had a solid foundation when he joined Bistrot Lepic. After working in several of Paris’s most noted restaurants, he came to D.C. and joined the likes of Gerard Pangaud (Gerard’s Place), Francis Devillier (Lavandou) and Bernard Grenier (Bistrot D’Oc) before teaming up with Fortin.

Chef Ndjiki-nya has managed to maintain the classic favorites that have been at the heart of Lepic’s success, while at the same time introducing new dishes in keeping with the ongoing evolution of fine cuisine. He borrows from other culinary traditions to create interesting dishes such as the chicken (free range and organic) with curry, coconut milk, lemongrass and saffron basmati rice, as well as the sautéed scallops featuring ginger broccoli mousse and ginger butter — which at first seem a bit out of place on the menu but once tasted, make perfect sense. They are as well executed and appealing as everything else on the menu, offering diners a broader spectrum than one might find on a strictly traditional menu. 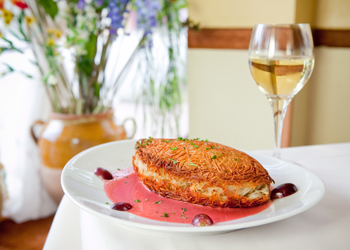 Pastry chef Mahamat Madjingar matches Ndjiki-nya in his ability to create excellently rendered versions of classics, while incorporating his own twist to the recipe. He does not, however, overemphasize presentation in his work.

Madjingar’s desserts are sturdy, solid and packed with good ingredients and stunning flavors. The tarts are simple, with crisp crusts; the crème brulée is light with an almost whipped consistency; and the mousse is dense and rich with chocolate. The most interesting of all the desserts is the homemade mint ice cream, which is so intense in flavor, it tastes as though it was infused with fresh mint that had been picked just moments ago in the garden.

Service is another component of Bistrot Lepic’s charm. Co-owner Brenac has made sure the staff understands that first and foremost, this is a neighborhood restaurant. All guests are treated as old friends (many are) and though familiar, the service is still highly efficient yet unobtrusive. The waiters are also extremely knowledgeable not only about the food, but the wine as well, so you can get good recommendations even without the sommelier.

And wine is an important aspect of Bistrot Lepic’s appeal. To help diners develop a better understanding and appreciation of wine, and French varieties in particular, Brenac has instituted a complimentary wine tasting every Tuesday night at both the main dining room and the wine bar upstairs. The bottles are used to effect in the lovely private dining room at the back of the wine bar, which can accommodate private parties up to 14 people, who are treated to a nice view of the wine collection in the customized storage area.

The intimate space has also contributed to Bistrot Lepic’s success. The main dining room is tiny (it seats just 45), but rather than feeling crowded, it feels cozy. The back wall is covered in a mural rendering of Gustave Caillebotte’s beloved “Paris Street; Rainy Day.” But rather than imparting a dreary feel, it enhances the coziness as one looks at the damp Paris street from a dining room suffused with the glow of cheerful daffodil-yellow walls, warm woods and bright paintings.

In 2002, Bistrot Lepic opened its wine bar upstairs, adding space for another 50 or so guests. Whimsical pigs and poppies frame another intimate setting punctuated by low tables and lounge seating that exude a more casual ambience. 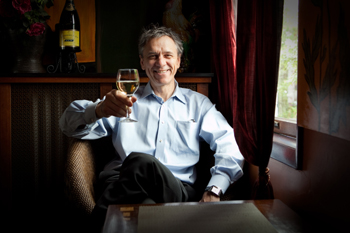 Managing partner and co-owner Cyrille Brenac, above, has successfully continued chef and owner Bruno Fortin’s original vision for Bistrot Lepic, which has been a favorite among Washington diners since 1995.

Otherwise though, Fortin and Brenac have wisely opted to limit Bistrot Lepic’s expansion so as not to dilute the restaurant’s charm. With limited seating and rather short hours, the supply and demand cycle ensures a steady stream of customers. (Make reservations well in advance if you want to eat at prime dining hours.)

Though not a central location, Fortin opened Bistrot Lepic in an area where local residents were starved for convenient and quality places to eat. Once his base was established in the neighborhood, word quickly got out and drew in diners from throughout the area.

In considering Bistro Lepic’s continued success, one wonders what distinguishes a fine dining destination from a neighborhood bistro, and how the choice of identity affects success. If price is the measure, Bistro Lepic falls a bit on the high end for a strictly neighborhood establishment. If location is a key determinant, Bistro Lepic slides into the neighborhood column, also befitting its casual (though very skilled) service that is characteristic of a local gathering place. If characteristics of the food separate the two groups, Bistrot Lepic’s consistently high standards — not to mention its serious wine program — put it squarely in the fine dining category.

Perhaps when he opened Bistrot Lepic, Fortin did not go through all the calculations to figure out how to define his venture. Regardless, diners have benefited from the result — an enduring staple that has set the standard for top-tier local dining. And with Bistrot Lepic in their backyard, Washingtonians will hopefully be able to get a little taste of Paris for a long time to come.