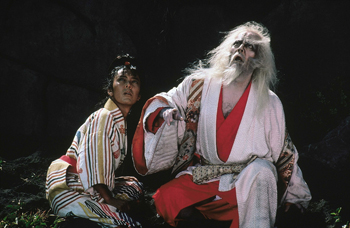 Japanese filmmaker Akira Kurosawa (“Rashomon,” “Seven Samurai,” “Yojimbo,” “The Hidden Fortress”) capped his career with 1985’s “Ran,” an adaptation of Shakespeare’s “King Lear” set in 16th-century feudal Japan. (Nearly 30 years earlier, Kurosawa had previously tackled the Bard with 1957’s “Throne of Blood,” based on “Macbeth.”) Kurosawa had long become synonymous with Japanese cinema in the West, but he was considered too old-fashioned and Western-influenced in Japan. “Ran” was only his fourth film in 20 years. It took Kurosawa 10 years to find the money (from French producer Serge Silberman) to make “Ran,” the most expensive production ever in Japanese history at the time. He would direct three other films before his death in 1998, but “Ran” would be Kurosawa’s last epic — worthy of his vaunted five-decade-plus career, and of the epic Shakespearean tragedy on which it is based.

Lord Hidetora (Tatsuya Nakadai) ponders retirement from active rule after a bloody career conquering his kingdom. He decides to split his domain among his three sons in an attempt to secure peace. Saburo (Daisuke Ryû), his youngest son who truly loves him, vigorously protests, anticipating nothing good to come. Furious at being defied, Hidetora banishes Saburo. Hidetora then chooses to spend the rest of his days in an outer castle, accompanied by his loyal jester, the Fool (Peter), and a small contingent of 30 retainers. As Saburo predicted, oldest son Taro (Akira Terao) and middle son Jiro (Jinpachi Nezu) jockey for power, both of them manipulated by Taro’s wife Lady Kaede (Mieko Harada), an evil Lady Macbeth-like schemer. Hidetora loses his castle and is forced to wander aimlessly while endless bloodshed piles up around him.

Before getting financing for the film, Kurosawa had plenty of time to meticulously prepare for “Ran” with hundreds of drawings envisioning what he wanted to create. Yet it’s by no means stagy despite using elements of Kabuki and Noh in transforming a story originated from a play. At the age of 75, even though he was nearly blind, Kurosawa was clearly at the peak of his powers. The resulting epic is both sweeping and detailed, with pitch-perfect writing, direction, acting, cinematography, action choreography, production design, colorful costumes and music.

French writer-director Jean-Pierre Jeunet presented the anticipated premiere of “Micmacs” at the 2010 Tribeca Film Festival. As one would expect from Jeunet (“Amélie,” “Delicatessen,” “The City of Lost Children”), “Micmacs” is a visually striking accomplishment set in an imaginative world. Using minimal dialogue, Jeunet deftly pays homage to the physical comedy of silent movies as practiced by Buster Keaton and Charlie Chaplin. To tell the story, the director relies on a string of set pieces executed with dazzling cinematography, choreography and production design. Though the witty film lacks a truly fleshed-out plot, going along for the whimsical ride is plenty of fun!

As a child, Bazil loses his father, a soldier, to a landmine in Algeria. After his grieving mother is committed, he ends up in an orphanage. As an adult, video store clerk Bazil (Dany Boon) is shot by a stray bullet but survives. After getting out of the hospital, Bazil is jobless and homeless but is adopted by the Micmacs (“shenanigans”), an odd bunch of quirky characters. Members include Remington, a compulsive list-typer; Calculator, a numbers whiz; Buster, a human cannonball; Slammer, a death row inmate pardoned after his guillotine got stuck; Elastic Girl, a contortionist; Tiny Pete, a salvage artist; and Mama Chow, the matriarch and cook.

With the aid of this motley crew of characters, Bazil seeks revenge on the two arms dealers that made the bullet lodged in his brain and the landmine that killed his father, hatching a scheme to pit the two company heads against each other so that they’ll destroy each other — much like the arms that they manufacture. 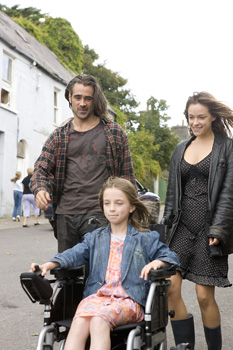 At the 2010 Tribeca Film Festival, “Ondine” premiered with Irish writer-director Neil Jordan (“The Crying Game,” Interview with the Vampire,” “Michael Collins”), Irish actor Colin Farrell and Polish actress Alicja Bachleda in attendance. Handily directed by Jordan, the laidback, charming fairytale recalls “Splash” — in a good way. Beautifully lensed by Australian cinematographer Christopher Doyle (“In the Mood for Love,” “Hero”), the film’s lush images are lovely to watch, including the Bara Peninsula on the rural western coast of Ireland.

Syracuse (Farrell) is a humble Irish fisherman who plies his trade off the coast of Cork. Divorced from his grumpy ex-wife, Maura (Dervla Kirwan), he’s given up alcohol to care for his precocious and insightful 11-year-old daughter Annie (Alison Barry), who’s wheelchair-bound and requires kidney dialysis. One day, out at sea, he catches a gorgeous woman, Ondine (Bachleda), in his nets. After reviving her, the mysterious figure has no memory and insists on not being seen, so Syracuse hides her in his house.

He initially thinks he’s imagined her, but then Annie finds her. Annie believes Ondine is a selkie, a mythical creature that can morph from seal to human and back (as in “The Secret of Roan Inish”). Certainly, magical things seem to happen around Ondine. As befitting a fairytale, Syracuse and Ondine fall in love. But in the real world, the path to living happily ever after is never straightforward.

Though “Ondine” is certainly very sweet, its plot twists keep it from being saccharine and predictable. The ensemble acting is first-rate all around. As for the leads, Farrell’s performance is quietly effective, and Bachleda always lights up the screen. Excellent supporting turns come from Jordan regular Stephen Rea as Syracuse’s priest, Kirwan as Syracuse’s former wife and Tony Curran as her well-tattooed boyfriend. A proper mood is also set by the appropriately haunting score by Irish composer Kjartan Sveinsson, keyboardist of the band Sigur Rós.

EuroAsiaShorts Exploring 2010’s theme of “joy and sorrow,” the EuroAsia Shorts Film Festival (June 2-12) is billed as, “Eight Countries. Six Nights. One Medium.” Venues include the Goethe-Institut, the Japanese Embassy’s Japan Information and Culture Center, the KORUS House at the Embassy of South Korea, the Letelier Theater and the Italian Cultural Institute. www.euroasiashorts.com

Goethe-Institut “Berlinale Favorites: Sixty Years of Outstanding Film” (through July 12) at the Goethe-Institut puts the spotlight on the top seven must-see films from the history of the Berlin International Film Festival, as selected by its creative director and manager, Dieter Kosslick. (202) 289-1200, www.goethe.de/washington