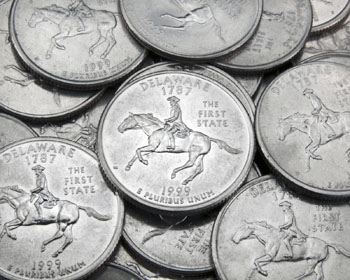 What can you get done in five minutes? Take a quick coffee break. Check email. Start your own business.

Start your own business?

If certain Internet ads are to be believed, that’s all the time it takes to set up a corporation or limited liability company in Delaware from the comfort of your own keyboard.

But the minimal effort, coupled with fairly low fees, isn’t the only draw of such entities based in the tiny state just 90 minutes north of the nation’s capital. More important for many is the fact that they come with a degree of anonymity usually associated with bank accounts in Switzerland and other stereotypical offshore tax havens in the Caribbean and elsewhere.

The 2012 U.S. election campaign has put the spotlight on the issue of secrecy in the First State of Delaware. Last spring, an anonymous $1 million donation to a super PAC (political action committee) supporting Republican presidential hopeful Mitt Romney came from a Delaware LLC that was dissolved four months after it was created — leaving little trace of who was behind it. The donor, a former managing director at Bain Capital, the private investment company Romney co-founded, came forward in August amid much media scrutiny. Comedy Central star Stephen Colbert, meanwhile, acquired his own Delaware company — called “Anonymous Shell Corporation” — to highlight how easily election campaign contributions can be camouflaged.

Indeed, ever since the advent of PACs and super PACs, tracking the torrent of money in politics has become exceedingly difficult. For instance, while the super PAC American Crossroads, created by Republican strategist Karl Rove, is legally required to disclose its contributions and donors, its “sister” organization, American Crossroads GPS, isn’t under the same legal obligations because it is a 501(c)(4). However, as a nonprofit, Crossroads GPS can donate directly to super PACs, effectively hiding the identity of individual or corporate donors.

Sound complicated? It is, and watchdog groups are working overtime to sort through this shadowy new system of unlimited campaign contributions in the wake of the Supreme Court’s controversial Citizens United decision.

But there’s yet another layer that obscures the funding sources behind all those heated attack ads this political season: the ease with which businesses can be set up in Delaware and elsewhere — which has been the subject of debate for some time in large part because it requires no data on actual ownership on incorporation forms, just the name of a “communications” contact.

However, the issue of anonymity extends far beyond Delaware’s borders to other U.S. states. A 2006 Government Accountability Office report, for example, found that most states do not require ownership information when businesses are formed or don’t have to submit periodic reports. Nevada and Wyoming are particularly popular places to incorporate. Agents based in those states advertise heavily on the web in an attempt to net customers.

According to the Tax Justice Network, an independent organization that in 2009 deemed Delaware the most secretive financial jurisdiction in the world, about 2 million corporations and limited liability companies are formed in the United States each year without states asking for the identities of the owners.

That’s also a statistic quoted by Sen. Carl Levin, a Democrat from Michigan. He has warned for years that the lack of details about who actually owns a particular company can facilitate corruption, money laundering and even terrorism.

“Right now, it takes more information to get a driver’s license or open a U.S. bank account than to form a U.S. corporation,” Levin said in remarks published in the Congressional Record in August.

That’s when he introduced legislation, together with Sen. Chuck Grassley, a Republican from Iowa, that would require states to obtain a list of the beneficial owners of corporations or LLCs formed under their laws and keep the information on file so it can be made available to law enforcement officials if need be.

“Under current U.S. law, corporations can be established anonymously, by hidden owners who don’t reveal their identity,” Levin added.

Rep. Carolyn Maloney, a Democrat from New York, introduced a similar bill in the House of Representatives in November. Levin’s measure, the latest of several attempts, has been referred to the Senate’s Homeland Security and Governmental Affairs Committee, where it faces considerable opposition and an uncertain future.

The American Bar Association, a group that represents about 400,000 lawyers and others in the legal profession, called the proposal “unjustified” and “counterproductive.” Not only would it be “extremely costly,” it also would undermine attorney-client privilege and traditional state court regulation of lawyers, ABA President Bill Robinson III wrote in a Dec. 16 letter to the heads of the committee.

Meanwhile, the National Association of Secretaries of States argues that Congress should focus on tracking corporate entity ownership information through federal tax filings instead of asking states to do the job. In a statement, it said the vast majority of new companies formed in the United States each year are created for legitimate reasons and “serve as the backbone of our state and national economies.”

“Why would we make this process more expensive and complex during a major recession, when other workable alternatives already exist?” the statement asked.

Richard Geisenberger, Delaware’s assistant secretary of state and director of the Delaware Division of Corporations, agreed that tax authorities ought to be the go-to people for beneficial ownership data. But he also pointed to the role of banks, saying they serve as a net for tracking the flow of money and reporting suspicious activities, so they have an obligation to know their customers.

Abroad, however, there are ways to circumvent banking supervision.

In congressional testimony in 2009, Jennifer Shasky Calvery, then senior counsel to the deputy attorney general at the Justice Department, said criminals were increasingly opening bank accounts for their U.S.-based shell companies in offshore jurisdictions with less rigorous customer identification requirements than in the United States. These companies, she added, then gained access to the U.S. financial system via banking relationships with U.S. financial institutions.

In 2006, the Paris-based Financial Action Task Force (FATF) found the United States to be noncompliant with aspects of its international anti-money laundering recommendations linked to beneficial ownership. In February of this year, FATF published a revised set of recommendations with the aim of cracking down on financial crimes more effectively.

But the group Global Financial Integrity said the changes did not go far enough.

“The new standards do not require the disclosure of the true ‘beneficial owners’ of corporate entities when they are formed but make that an optional approach, thereby leaving intact one of the major loopholes used by financial criminals to anonymously launder their money,” the group said in a statement.

International crooks have certainly benefitted from U.S. shell companies. One prominent example is Viktor Bout, a Russian arms dealer dubbed the “Merchant of Death” who was convicted on conspiracy charges late last year in New York.

“It is unacceptable that Mr. Bout was able to set up shell corporations in three of our states and use them in illicit activities without ever being asked who owned those corporations,” Levin said in his August remarks.

In Austria, prosecutors are investigating a high-profile corruption case involving a former finance minister. The probe centers around the Liechtenstein account of a Delaware LLC that has been dissolved and that documents leaked to local media indicate was used to obscure the money trail for a privatization deal.

But investigations, especially those with an international component, don’t always bear much fruit due to a lack of data from the United States. Frustrations often run high among foreign governments whose requests for legal assistance linked to U.S.-based shell companies aren’t honored — largely because there’s no information to give them or they’re not given much priority, said Jack Blum, a lawyer who has worked extensively on the issue and who is a member of the Tax Justice Network.

“I’ve talked to foreign law enforcement people who say, ‘Yes, we’ve requested information from the U.S. but it seems to go into a kind of black hole when it gets here,'” he said.

That doesn’t do much to foster good relations.

“This problem not only damages our reputation,” Shasky Calvery told lawmakers, “but is also counterproductive to our efforts to join with foreign counterparts in a global offensive against organized crime and terrorism.”

Shell, Shelf and Other Jargon

In January, Delaware issued guidelines barring registered incorporation agents listed on its website from marketing or promoting shell companies, aged shelf companies or shelf registrations, according to Richard Geisenberger, director of the Delaware Division of Corporations.

In an advisory to financial institutions, the Treasury Department defined shell companies as “non-publicly traded corporations, limited liability companies (LLCs) and trusts that typically have no physical presence (other than a mailing address) and generate little to no independent economic value.” While used around the world for legitimate purposes, they also have become “popular tools for money launderers,” it said in a separate threat assessment.

According to the Better Business Bureau, shelf companies refer to shell companies that are created, kept largely inactive or put on a shelf to “season” before being sold to those wishing to start a company without going through all the procedures of creating a new one.

Shelf companies are usually formed in low-tax, low-regulation states. Some are advertised as having established lines of credit and are typically sold off for their strong credit ratings.

That in turn is often the result of a clever sleight of hand, as Doug Broten, president of the Better Business Bureau of Central California, told BusinessWeek’s Karen E. Klein.

“So someone sets up a whole bunch of corporations in another state,” he explained, “and starts billing in between all of them. So over time they show income and expenses, and they are paying their bills on time. They’re not real businesses, but eventually they look like they’re established, credit-worthy companies.”