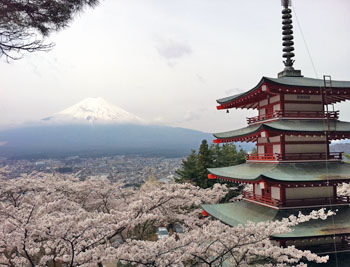 Lucy Walker’s “The Tsunami and the Cherry Blossom” receives the third annual Polly Krakora Award for artistry in film at the 2012 Environmental Film Festival.

The behemoth 20th annual Environmental Film Festival in the Nation’s Capital (March 13-25) has grown to become one of Washington’s largest cultural events, presented in partnership with more than 100 international, national and local groups.

Founded by Flo Stone in 1993, the festival attracted some 1,200 people in its inaugural year. Today, it’s expanded to become the nation’s largest showcase of environmental films, pulling in an audience of more than 30,000.

And for its 20th anniversary, the Environmental Film Festival is pulling out all the stops, offering no less than 180 narrative, documentary, archival, animated, experimental and children’s films from 42 countries, including 93 world, U.S. and D.C. premieres. In addition, 75 filmmakers and 115 special guests will discuss the films, including top names such as documentarian Ken Burns. Screenings take place at 64 area venues, including embassies, museums, universities, libraries and theaters.

Environmental issues remain as hot a topic as ever — from the fervent debate over climate change around the world, to solar panel scandals in Washington, to the fight for scarce resources in Sudan. This year, the Environmental Film Festival aims to hit close to home by linking human and animal health with the planet’s well being — the special theme for 2012.

“The water we drink, the food we eat and the air we breathe are all essential to human life. The effects of toxins and pollutants on the human life support system can be disastrous to our health,” the festival website says. “Our films address the complex relationship between health and the environment with the warning that whatever we do to the environment we do to ourselves.”

The subject matter spans the eco spectrum, ranging from the disastrous introduction of cane toads into Australia, to a water contamination cover-up by the U.S. Marine Corps, to a group of proud Scottish homeowners taking on celebrity tycoon Donald Trump as he buys up one of Scotland’s last vestiges of wilderness to build a golf resort.

A centerpiece of the festival is a retrospective of Lucy Walker’s career (March 17-25) at AFI Silver that celebrates the British documentarian with a five-film series. Presented with the Embassy of Japan, Walker will screen her latest film, the Academy Award-nominated “The Tsunami and the Cherry Blossom,” which is the recipient of the Environmental Film Fest’s third annual Polly Krakora Award for artistry in film. The director had set out to create “a visual haiku about cherry blossoms” in Japan but changed her plans after the devastating earthquake and tsunami that hit the country on March 11, 2011, instead connecting the disaster to the beloved flower’s ephemeral quality of life and healing.

Opening night presents the D.C. premiere of “Switch,” a documentary about the change from fossil fuels to renewable energy, and a memorial tribute to Nobel Prize winner Wangari Maathai, a leading environmentalist from Kenya. The closing night film, “A Fierce Green Fire: The Battle for a Living Planet,” a 2012 Sundance Film Festival selection, surveys the environmental movement in the United States.

Meanwhile, the health and economic effects of the BP oil spill in the Gulf of Mexico are examined in “The Big Fix and Beyond Pollution,” while the environmental impact of Alberta’s tar sands and the proposed Keystone XL Pipeline are explored in “Dirty Oil” and “Pipe Dreams.”

Other highlights include famous documentary filmmaker Ken Burns presenting advance clips of his upcoming film, “The Dust Bowl” (Sun., March 25, 2 p.m.), at the National Archives, while at the National Museum of Natural History, environmental filmmaker Deborah Koons Garcia (“The Future of Food”) presents the world premiere of “Symphony of the Soil” (Sun., March 25, 4 p.m.), a documentary focusing on soil’s often overlooked importance in the history of the Earth, followed by a panel discussion.

Vanguard filmmaker Perry Miller Adato also screens her most recent documentary, “Paris: The Luminous Years” (Sat., March 24, 1 p.m.) at the Phillips Collection. Another French entry, “La Clé des Champs (The Field of Enchantment),” is a U.S. premiere that spotlights the wonders of nature through close-up photography.

Indeed, the international lineup — and embassy collaboration — is expansive. From oil digging in Ecuador’s Amazon jungle, to chemicals poisoning Inuit communities in Greenland, to radioactive wolves contaminated by the fallout from Chernobyl, virtually every corner of the planet is covered, offering a fascinating glimpse into just how much that planet shapes every aspect of our lives — and vice versa.

For more information on the Environmental Film Festival in the Nation’s Capital, please call (202) 342-2564 or visit www.dcenvironmentalfilmfest.org.