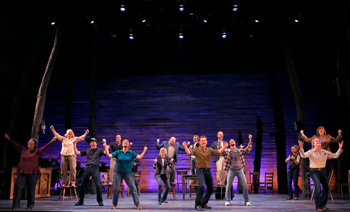 Fifteen years ago this month, the 9/11 terrorist attacks touched millions of people not only in the United States, but around the world. They also directly touched the people of Gander, a tiny town in the Canadian province of Newfoundland whose population essentially doubled overnight when 38 planes carrying, 6,579 passengers were diverted to Gander in the wake of global chaos and panic.

Townspeople opened their homes and helped in ways both big and small to offer comfort to the stranded, frightened passengers. Their stories received national acclaim when Tom Brokaw aired a special during the 2010 Vancouver Olympics on the lasting bonds formed between those passengers and Gander residents. The veteran journalist said their hospitality “summarizes the grace and generous spirit of this very unselfish nation.”

Now, Gander’s story is coming to D.C. this month with the rousing musical “Come From Away,” which is heading to Broadway next year but, before that, is showing at Ford’s Theatre after successful runs in San Diego and Seattle.

Irene Sankoff and her husband David Hein, left, wrote “Come From Away,” a musical based on the true story of Gander, a tiny Canadian town that welcomed thousands of stranded airline passengers in the wake of 9/11.

David Hein and Irene Sankoff had a friend who approached them with a unique idea: to create a musical based on the events that happened in Gander during and after 9/11. The husband and wife team’s 2009 musical “My Mother’s Lesbian Jewish Wiccan Wedding” attracted the eye of Michael Rubinoff, who was looking for someone to write “Come From Away.” Little did they all know it would become the fifth Canadian musical ever to go to Broadway and only the second set in Canada.

“This comes with a lot of responsibility,” Hein told The Diplomat.

Hein and Sankoff headed up to the small, folksy town of Gander for the 10th anniversary of 9/11 to get some more details on the town that housed thousands of airline passengers after U.S. and Canadian airspace was closed in the aftermath of the plane attacks in New York and Washington, D.C.

“There were the pilots, people who have fallen in love there and had their lives changed and were reunited in Gander to commemorate what happened,” Hein said. “We spent almost a month there talking to people, hearing story after story of extraordinary generosity and kindness. We came back so inspired — full of stories that made us laugh, cry and want to share with people.”

Sankoff added that the people of Gander responded with open arms and a sense of solidarity that stood in “stark contrast” to the brutality of the 19 al-Qaeda terrorists who transformed planes into missiles that took the lives of nearly 3,000 people.

The couple was in New York City on Sept. 11, 2001, and Hein himself had a cousin in the World Trade Center Twin Towers who managed to escape the inferno. Their own experiences with 9/11 made them determined to get Gander’s story right, a story Hein calls a “9/12 story, about a tiny community that responded to a terrible tragedy.”

Sankoff is a Canadian citizen and Hein a dual American-Canadian citizen. Hein said he was moved by the innate kindness of our Canadian neighbors. “It should be how we respond,” he told us.

In the skies, confusion reigned on 9/11 as thousands of aircraft were diverted, pilots dumped jet fuel to land and air traffic controllers fought to stay calm amid uncertainty and fear. Meanwhile, on the ground, Gander officials handled an unprecedented influx of planes, while residents of the two-stoplight town braced for a surge of people.

The townspeople of Gander not only invited complete strangers into their homes to feed them, let them take a hot shower and get some sleep, they took them on tours, let them use their phones, donated clothing and ferried them around town. From running small errands to consoling people worried about the fate of loved ones, Gander’s residents stepped up.

“No need was gone unanswered,” Sankoff said, citing a story about a woman who desperately missed her dog and just wanted a cup of coffee. A Gander native not only gave the displaced woman her coffee, she also got her own dog to sit with and comfort her. 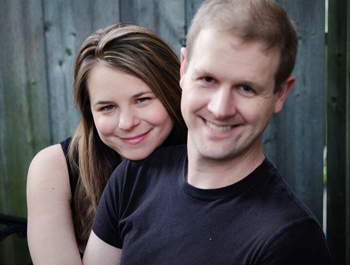 Irene Sankoff and her husband David Hein, left, wrote “Come From Away.”

“Yet for the people of Newfoundland, it was just an ordinary thing to do,” Hein said. “These days it feels so extraordinary.”

The musical tries to touch on as many stories as Hein and Sankoff could possibly squeeze into a 90-minute musical. There’s the pharmacist who stayed up two days in a row to fill thousands of prescriptions in different languages. There are specific characters too, like the mayor of Gander and Beverley Bass, the first female captain of a commercial airliner.

During the 10th anniversary when Hein and Sankoff visited Gander, they were able to witness a pancake breakfast that airline passengers had organized for the residents to say thank you.

Hein mentioned that Newfoundland police officers praised the airline passengers — most of whom had little information on what was happening in the U.S. — for their calm, commendable behavior as well. “They told us, ‘We couldn’t have done what we did if they gave us a hard time.'”

Hein said he and his wife wanted to create a play about “finding common denominators, something about people.”

Canadian Embassy spokesperson Christine Constantin said the play is a reflection of the strong ties between the two neighboring countries. “The tragedy of Sept. 11, 2001, reinforced enduring bonds of friendship that underpin the Canada-U.S. relationship,” she said. “We are proud that this moving story, which highlights the resilience of both the citizens of the town of Gander in Newfoundland and Labrador and the stranded passengers who became their friends, is being highlighted here in the nation’s capital.”

Just call it the Canadian way.