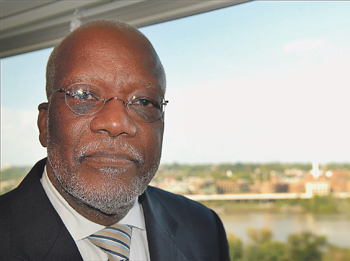 With only 73,000 inhabitants, the Caribbean island of Dominica lacks beaches but is blessed with pristine waterfalls, virgin rainforests and an unusual boiling lake situated in Morne Trois Pitons National Park, only six miles due east of the capital, Roseau.

Dominican Ambassador Hubert John Charles has been tasked with drumming up U.S. support to help his tiny Caribbean island rebuild after Tropical Storm Erika caused an estimated $444 million worth of damages.

Yet nature has not always been kind to Dominica.

On Sept. 20, 1834, a powerful hurricane slammed into the island, causing a 12-foot storm surge that devastated Roseau and left 230 people dead. On Aug. 29, 1979, Hurricane David — a Category 5 storm with 150 mph winds — destroyed or damaged 80 percent of Dominica’s homes, obliterated the banana crop and killed 56 people.

This year, disaster struck again in the form of Tropical Storm Erika, which arrived Aug. 28, dumping 10 inches of rain on the island, causing catastrophic mudslides and flattening entire villages before moving on to Guadeloupe, Puerto Rico and the Dominican Republic.

In all, 31 people died, with damage to Dominica alone estimated by the World Bank at $444 million — an astronomical figure for a country with a GDP of just over $525 million last year. Prime Minister Roosevelt Skerrit said Erika has set the country back by 20 years in terms of development — a sentiment shared by Dominica’s longtime ambassador to the United States, Hubert John Charles.

“The point is, we need to reconstruct,” he told The Washington Diplomat. “Two villages, Petite Savanne and Dubique, have been declared uninhabitable. Vulnerability has increased and the ground is now unstable. We’re practically starting over.”

Charles, 67, has represented Dominica in the nation’s capital for more than five years — the last two from his temporary mission in suburban Arlington, Va., as the actual embassy on New Mexico Avenue undergoes long-overdue repairs.

But repairing the damage to his homeland is now his top priority. Charles has been tasked with drumming up support in the United States to help in the rebuilding effort — an uphill climb for any ambassador, but particularly for one that represents such a tiny nation.

Charles’s plight is one many envoys, from countries both large and small, can relate to: how to capture Washington’s attention when that attention is being constantly diverted by a litany of crises. While Erika was devastating to Dominica, it had little global resonance outside the island. And unfortunately, disasters are a dime a dozen — whether it’s the rise of the Islamic State in the Middle East, the migrant crisis shaking Europe or hurricanes elsewhere in the Caribbean.

Not only does Charles have to compete in a crowded foreign policy landscape, he has to contend with tightened U.S. budgets and a Congress preoccupied with campaigning in an election year. He faces the added challenge of raising funds for long-term reconstruction, an urgent issue but one that tends to get sidelined once donations for the immediate emergency relief dry up. 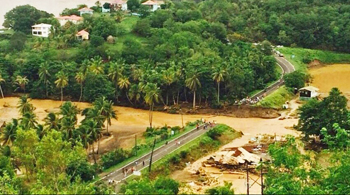 So the ambassador has been forced to roll up his sleeves and get creative, tapping friends in Washington and trying to place his country’s disaster in a broader regional context.

Charles happened to be attending a conference in Ecuador when Erika hit his beloved island.

One mountaintop weather station located at Gleau Gommier, in the center of the island, recorded 17 inches of rain within an 18-hour period.

Charles said most of the deaths occurred in Petite Savanne, home of Dominica’s bay oil industry. In addition, Douglas-Charles Airport, on the island’s northeast coast, suffered $15 million in damages and had to be closed for two weeks. Since its reopening, the airport can only accommodate daytime landings because all night-landing equipment on the tarmac was destroyed.

Meanwhile, the entire population of Dubique will be resettled elsewhere, in 50 houses donated by the Venezuelan government. Likewise, St. Kitts pledged $370,000, while Cuba sent doctors to deal with Erika-related medical emergencies.

And even though Dominica broke relations with Taiwan upon granting diplomatic recognition to mainland China 10 years ago, both rivals gave the island cash in its time of need (Beijing sent $300,000 and Taipei $100,000).

“We are happy with the response we got from the international community. Several prime ministers came down and offered assistance,” Charles said. “Japan offered generators and water tanks, Chile provided resources, and so did Colombia, Mexico and even the British Virgin Islands. The generosity of the Caribbean governments is something we will never forget.”

Yet the United States “could do a little bit more,” Charles said diplomatically.

On Capitol Hill, the loudest proponents of help for Dominica are Rep. Stacey Plaskett, the nonvoting delegate from the U.S. Virgin Islands, and two New York Democrats — Rep. Yvette Clarke and Rep. Eliot Engel — both of whom have large numbers of English-speaking Caribbean immigrants in their respective districts. 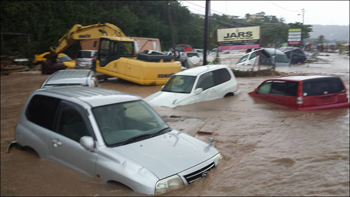 Plaskett visited Dominica after the storm, and on Sept. 30 she sponsored a House resolution “expressing the sense … that the U.S. government should provide additional relief and assistance to the island of Dominica” — in addition to the $150,000 the Obama administration has already provided.

“The risk is, people will forget there was a tragedy in Dominica,” Charles lamented. “Right after that, Hurricane Joaquin hit the Bahamas, and of course people can say to us, ‘You don’t have the problems that Syria has. Look at those refugees.’ But those arguments don’t help us.”

Charles declined to specify how much aid he wants from Washington.

“I would be hesitant to give a figure,” said the ambassador, who’s spent most of his career with the United Nations, serving in countries as diverse as Barbados, Nigeria, Mozambique and South Africa. “But given the frequency of these natural disasters in the Caribbean, and given our proximity and the long-term engagement of the U.S. in our development, I think it is appropriate for the United States to consider the idea of establishing a disaster relief fund for the Caribbean.”

He added: “I’m no longer focusing just on Dominica. I’m suggesting that in light of the regularity of these disasters, we hardly ever have the capacity to do the type of reconstruction we need to do.”

That’s why Charles is pushing to broaden the reach of USAID, whose assistance skews toward more immediate disaster relief. “In the longer term, therefore, we would like to see the State Department’s Office of Foreign Disaster Assistance and USAID empowered with the budgetary means to support not only emergency response initiatives, but also the critical recovery and reconstruction activities that the vulnerable, small states on the Caribbean have to contend with virtually on an annual basis.” 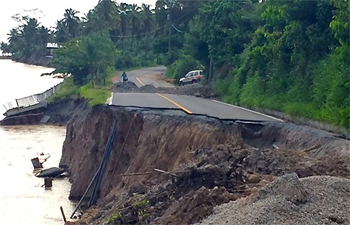 The recent tropical storm has set the Caribbean island’s development back by 20 years, according to its prime minister.

In Dominica’s case, the challenge is especially great because, for one thing, its debt-to-GDP ratio stands at a staggering 81.1 percent, meaning it can’t afford to keep rebuilding every time a hurricane hits the island. In addition, Dominica has no beaches, so it can’t count on the income from mass tourism as other Caribbean destinations do.

Furthermore, people often confuse Dominica with the similar-sounding but more familiar Dominican Republic — and finally, the United States has no embassy there.

Engel hopes to change that, however. In March, the congressman introduced his U.S.-Caribbean Partnership Act, which seeks to establish new embassies in Dominica and four other English-speaking island nations: Antigua and Barbuda, St. Kitts and Nevis, St. Lucia and St. Vincent and the Grenadines.

“Just as you can’t conduct diplomacy from a bunker, you can’t conduct diplomacy from hundreds of miles away,” said Engel. “My bill would strengthen diplomatic ties with our Caribbean neighbors so that we can work even more closely on a range of issues, from promoting economic development and combating drug trafficking to our shared work through the Organization of American States.”

Engel, who originally submitted the bill in the 113th Congress, is the leading Democrat on the House Committee on Foreign Affairs and a former chairman of the Western Hemisphere subcommittee.

At present, the U.S. Embassy in Bridgetown, Barbados, handles all diplomatic and consular affairs with the five countries. But Erika may have inadvertently given Engel’s bill a boost, said Charles.

“All five of us ambassadors have met and agreed we would together show our solidarity and support for the initiative,” he said, adding that “the presence of a U.S. Embassy in Dominica would give the United States a better understanding of the development challenges we face.”

John Maisto, who was U.S. ambassador to Venezuela from 1997 to 2000 and is well versed in Caribbean affairs, said Engel’s proposal makes perfect sense.

Dominica lacks beaches but is blessed with pristine waterfalls and virgin rainforests.

“Eliot Engel is one of the smartest men in Congress when it comes to foreign policy. The fact that the United States lacks full-blown embassies in the Caribbean sends the wrong message,” he told us. “When China and Venezuela can have more embassies in our immediate neighborhood than we do, that says something about the ability of the United States to focus. Both political parties are responsible for this.”

At only 290 square miles, Dominica is just over half the size of Maryland’s Montgomery County, and its population is less than that of Germantown, Md.

Even so, Charles predicted Congress would ultimately pass Engel’s bill — despite cost considerations and the fact that not a single Republican has signed onto it.

“You can always argue that given our size and population, the establishment of an embassy is not valid. But at the same time, why is Cuba there? Why is Brazil there?” he pointed out. “It’s not in U.S. interests to be seen or perceived as distant and removed from the development dynamics of small Caribbean states. We will never be that important if you look at us in terms of size, but it’s in the interests of the United States to go beyond that.”

He added that with global warming, future storms and hurricanes might make Erika look tame by comparison.

“A lot of the progress we make socially, economically and environmentally is undone by these disasters, which set back countries like Dominica on an almost annual basis,” said Charles. “This is a legitimate area for U.S. engagement and investment, so to that extent, we need to work with Congress.”