Preventing Iran from building a nuclear bomb for generations while stopping missile tests and Iranian support for terrorist groups is an admirable goal—though not necessarily a realistic one.

That’s the view of Sir Peter Westmacott, who began his diplomatic career in Tehran in the late 1970s and ended it 40 years later in Washington, as Britain’s ambassador to the United States.

On May 5, the Brookings Institution hosted Westmacott for a panel discussion on the Middle East, and the critical role ambassadors and envoys play in shaping policy in the region. The event also coincides with release of Westmacott’s new memoir, “They Call It Diplomacy”—a 368-page account of a fascinating career spent in Her Majesty’s Diplomatic Service.

His career spanned the end of the Cold War to the post-9/11 era, and as second secretary in Tehran, Westmacott had a front-row seat in five years preceding the 1979 Islamic Revolution.

“I went to Iran as a very young diplomat in my first overseas tour,” he said, recalling intensive Farsi lessons at London’s School of Oriental & African Studies prior to his arrival. “I sat cross-legged on the floor with some carpet bazaar people in Shiraz trying to put into practice what I had learned in the schoolroom. My job was to understand what was going on in Iran. From Iran, I did a little tourism, driving my own Land Rover across the desert into Afghanistan through Herat and Kandahar. Back in these days, in the late 1970s, that was something you could do.”

At that time, Westmacott said, Iran was of great interest to business executives—especially as the US and British economies were in the doldrums.

“We had high interest rates, high unemployment, very low growth and trade deficits, and Iran—after the Shah had tripled the price of crude oil on Christmas Eve in 1973—was suddenly the land of El Dorado,” he said. “Investment bankers, arms salesmen, all sorts of people turned up looking to do business there. It was a very exciting place to be, and all nationalities, races, ethnicities and religions felt very welcome. The Iranians were proud of their civilization going back thousands of years. It was an extraordinary place to begin my diplomatic career.”

Yet, as he told Brookings moderator Suzanne Maloney, few foreign diplomats in Tehran realized what was about to happen.

“If any one of us had known what was coming, it wouldn’t have happened like it did,” Westmacott said. “One of the reasons why the United States and the United Kingdom are able to work together in many respects about Iran, is that in those 40 years, you haven’t had a single diplomat on the ground in Iran—which I think is a tragedy—whereas most of that time the Brits have had an ambassador and an embassy. We’ve been able to make some sort of head or tail what’s going on there.”

US, Iran still far apart on nuclear talks in Vienna

Bruce Riedel, a senior fellow at Brookings, retired in 2006 after 30 years with the CIA. He also participated in the panel with Westmacott.

“By October 1978, it was abundantly apparent that things in Iran were not going the way we hoped,” said Riedel, explaining that the Americans had little clue what was really happening there. “The United States had believed its own propaganda, that the Shah was this firm, decisive man taking his country from medieval times to be the Sweden of the Middle East. In fact, he was deeply indecisive, who—at the moment of truth in 1953, when the agency and MI-6 were putting him back in power—fled the country to Baghdad and on to Rome. And that hurt us tremendously.” 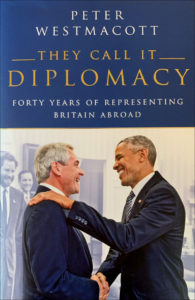 In retrospect, Riedel said, while many Americans tend to equate Iran with evil and speak of the leadership in “almost demonic terms,” most presidents since 1979 have sought to restore relations with Iran.

During his posting here, Westmacott was accused of meddling in US domestic politics by opponents of President Obama’s nuclear deal with Iran, formally known as the Joint Comprehensive Plan of Action (JCPOA). A 159-page agreement reached by Iran and the P5+1—Britain, China, France, Germany, Russia and the United States—the deal was adopted on July 20, 2015.

Later on, Westmacott was vocal in his efforts to save the JCPOA in the face of threats by the Trump administration to scrap it.

“There was a certain legitimacy among the rest of us who had signed the agreement, and we wanted to see it go through — and didn’t want to see the flagship element of the Obama administration’s diplomacy go down in flames,” he said. “It sure felt at the time as if this was a very significant agreement.”

Yet even before Trump walked away from the deal three years ago, international banks became nervous about doing business with Iran, afraid of running afoul of unilateral US sanctions that had never been suspended. After May 2018, Iran stopped complying with the accord.

Joe Biden’s election victory changed the calculus in Washington, though negotiators in Vienna still remain far apart. In short, as the New York Times reported May 9, “the Iranians are demanding that they be allowed to keep the advanced nuclear-fuel production equipment they installed after Mr. Trump abandoned the pact, and integration with the world financial system beyond what they achieved under the 2015 agreement.”

The Biden administration, meanwhile, says that “restoring the old deal is just a steppingstone,” according to the Timesarticle. “It must be followed immediately by an agreement on limiting missiles and support of terrorism—and making it impossible for Iran to produce enough fuel for a bomb for decades. The Iranians say no way.”

Indeed, said Westmacott, the original deal “was never intended to constrain Iran’s behavior in the region. That wasn’t what we set out to do because it wasn’t realistic.”

He added that he’s very skeptical of a “bigger and better deal,” as some on Capitol Hill are pushing for.

“Yes we should extend the timeline, but most people want to include the Iranian missile program. I understand the logic of that, but the missile program is essential to their defense and their ability to project power against the Israelis. I just don’t see why the Iranians would give up missiles.”

“My sense is that trying to get a bigger, more restrictive deal on constraints [against] Iran first off is not realistic,” he said. “The reality is that on the Iranian side, there are quite a lot of people who feel that because the US broke its word and walked away, it’s the US who should be putting more bread on the table rather than asking Iran to give up more.”

Westmacott added: “Now diplomats in Vienna are looking very actively with genuine political will from both Tehran and the US. If the deal can be put back together again, there could be further negotiations on other issues. There are 150 members of the House of Representatives who have asked the Biden administration to give priority to this deal. That’s a significant message to the administration, and I’m personally very pleased.”

One wild card remains Israel, whose right-wing government under Prime Minister Benjamin Netanyahu views Iran as an existential threat and points to its stockpiling of highly enriched uranium as evidence that the regime cannot be trusted.

Westmacott recalled that when he was ambassador in Washington, “we had daily calls coming in from Netanyahu saying this is a terrible deal.”

Yet Netanyahu himself is in serious trouble now. Facing a corruption trial and failure to form a government amid strong opposition from the left and right, “Bibi”—as he’s known informally—may find himself out of power for the first time in 12 years.

“Netanyahu has been the most outspoken opponent of the JCPOA. He even took the step of addressing Congress without asking the president’s approval,” said Westmacott. “If Bibi is not going to be prime minister, might the Israeli posture towards an agreement shift somewhat? If Israel is no longer going to be strongly against an agreement, that can change a lot of things.”