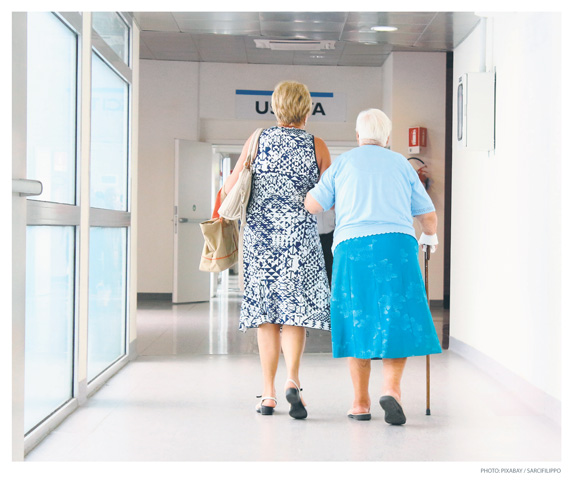 It’s often no fun getting old in America: A new report finds the availability of health care for U.S. seniors lags behind that of other affluent nations.

Access to insurance isn’t an issue, because all Americans 65 and older are covered by Medicare. But America’s seniors are still sicker than the elderly in other countries — and are more likely to go without essential care because they can’t afford it, according to the Commonwealth Fund study.

“Our Medicare is not as generous as comparable insurance in other countries,” fund President Dr. David Blumenthal said during a media briefing Nov. 14. In other countries, government health insurance is not restricted to the elderly, but covers everyone, he added.

The United States is complacent about the value and benefits associated with Medicare, even though it’s a universal system, according to Blumenthal.

“We do know that we, as a country, do tolerate higher levels of inequality. That’s most evident in the fact that we underinvest, compared to other countries, in social services and overinvest, despite the lack of generosity of our insurance, in health care,” he said.

Providing more social services to the elderly might help reduce the inequality of care, Blumenthal said.

Almost one-quarter of U.S. seniors didn’t go to a doctor in the past year when sick or they didn’t get a recommended test or fill a prescription because they couldn’t afford it.

In France, Norway, Sweden and the United Kingdom, no more than 5 percent of older adults skipped care because of costs, the researchers found.

In the United States, 22 percent of seniors spent $2,000 or more on out-of-pocket costs during the past year. The only country with higher out-of-pocket costs was Switzerland, with 31 percent spending more than $2,000 out of pocket. Among all the other countries, less than 10 percent of seniors spent $2,000 or more, researchers found.

Among U.S. seniors, 25 percent said they worried about having the money to buy food or pay rent or bills for heat, electricity or medical care. However, in France, the Netherlands, New Zealand, Norway, Switzerland, Sweden and the United Kingdom, only 10 percent or less said they had these concerns.

Seniors in many countries who suffered from several chronic health problems or had trouble with the basic activities of daily living reported being dissatisfied with the quality of their care.

For example, in Australia, 41 percent were somewhat or not at all satisfied, compared with 26 percent in the United States and 21 percent in Switzerland, the country rated the best in satisfaction.

Cost was also a concern for the sickest. In the United States, 31 percent skipped health care due to costs, compared with 2 percent in Sweden. Additionally, almost a third of the sickest U.S. seniors worried about having enough money for meals, rent or other bills, researchers reported.

The sickest seniors in other countries struggled as well, with about 25 percent of those in Australia and Germany also saying that they worried about paying for food, rent or other bills.

Many of these seniors also suffered from anxiety or depression, which can lead to poorer health and higher costs, Blumenthal said. Social isolation was also a problem faced by a number of seniors, particularly in European countries, the study found.

Access to care, especially after hours and on weekends, is another challenge seniors face.

Fifteen percent of U.S. seniors and 11 percent of Canadian seniors went to the emergency room for a condition that could have been treated by a regular doctor or clinic had one been available. In other countries, that figure is 8 percent or less, the researchers said.

U.S. doctors did well when it came to counseling seniors on diet, exercise and the risks of falling. Only doctors in Australia and France were similarly likely to discuss falls with their patients, the researchers found.

Dr. Kenneth Brummel-Smith is professor emeritus of geriatrics at Florida State University College of Medicine and a spokesman for Physicians for a National Health Program. He said that providing more home care, social services and after-hour doctor and clinic times could help improve the care of the elderly.

“What older people really need are the support systems to manage themselves,” Brummel-Smith said. “Everyone wants to live independently if possible, but we aren’t set up to do that.”

The report was published Nov. 15 in the journal Health Affairs.

For more information on elder care, visit the U.S. Department of Health and Human Services at www.hhs.gov/aging/index.html.