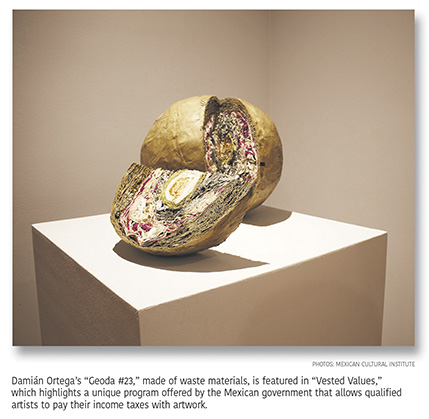 The term “starving artist” may be a well-worn cliché, but it holds an element of truth. For the most part, art is not a lucrative profession. Even large museums in the U.S. fight for their financial survival, relying on private collectors and corporate donors. Unlike in some other countries, the U.S. generally does not have a tradition of government supporting the arts.

Likewise, small, independent artists cannot count on the government to sustain them. Instead, they often struggle to sell their work, find benefactors and make ends meet. Some can’t even pay their taxes.

The IRS may have little sympathy for the artistic process, but tax collectors in some countries are a bit more forgiving and, well, more creative.

Mexico is one of those, and the fruits of its proud 60-year-old tradition are currently on display at the Mexican Cultural Institute in the exhibit “Vested Values.” Over 40 paintings, sculptures and photographs highlight a program offered by Mexico’s Tax Administration Service called Pago en Especie — or “payment in kind”— that allows qualified Mexican artists to pay their income taxes with their artwork.

The Mexican Cultural Institute, housed in a Beaux Arts building on 16th Street that used to be home to the Mexican Embassy, is showcasing works submitted under this unique arrangement. The institute’s executive director, Alberto Fierro, says that “many thousands of artists have benefited from this payment in kind program,” and that their works provide a fresh look at Mexico’s thriving arts culture.

“Vested Values” was curated in Mexico City and came to Washington in mid-September, intended not only to show the value that the Mexican government places on art, but also to illustrate what contemporary artists in the country are creating. Striking abstract oil paintings are on display, as well as imaginative paper cuts, sculptures cleverly composed of waste materials, and photographs drawn from the strains and stresses of daily life in Mexico’s rural areas.

Fierro notes that 40 percent of the population struggles with poverty, bringing expressions of contemporary culture into stark relief against the backdrop of modern life. It is a continuing challenge, he says, for artists to express the conditions facing the urban and rural poor in Mexico while balancing such expressions with the richness of the country’s historic heritage.

Fierro, who is also the minister for culture and education at the Mexican Embassy, says the job of the cultural institute is to “build links of collaboration” so that “people in the arts will come and learn from the experience.” Free tours are provided on request to groups of students “to show the richness of Mexican creativity,” Fierro said, “and to show how in the arts, Mexico has always been a Western actor in dialogue with Western culture.”

Current partners with the institute’s cultural outreach program include the Hirshhorn Museum and Sculpture Garden, where Mexican-Canadian artist Rafael Lozano-Hemmer has assembled the museum’s largest interactive technology exhibition to date. “Pulse” comprises three major installations that use heart-rate sensors to create kinetic and audiovisual experiences based on visitors’ own biometric data.

The Mexican Cultural Institute is hosting its own Lozano-Hemmer exhibition called “Voice Array” in conjunction with “Pulse.” “Voice Array” records the voice of a visitor and translates it into flashes of light in a unique sound-and-light pattern. Each new recording pushes all previous recordings one position down and gradually one can hear the cumulative effect of 288 previous recordings. The result is a collaborative piece that evolves and adapts in each city it is displayed and each context in which it is shown. 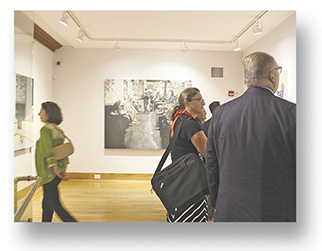 Another collaborative effort this past year included an exhibit titled “Women Who Make Ibero-America: Power Behind the Everyday.” Held at the Hillyer Art Space, a small arts venue in Washington, the exhibit featured contemporary photography from countries across Latin America, Spain and Portugal, focusing on how women preserve traditions while also fostering social change (a theme that resonates around the world.)

The international popularity of Mexican cuisine has also sparked widespread interest in a year-long series at the institute called “Mexican Table,” a showcase of regional culinary favorites coupled with the music and colorful traditions that have made Mexican food a major international draw. Each of the sessions of “Mexican Table” regularly sells out.

The building that houses the Mexican Cultural Institute is a work of art in itself — a timeless setting that provides a stunning backdrop to the contemporary exhibits on display. A private home for U.S. Cabinet-level officials and visiting dignitaries in the early 20th century, it was purchased by the Mexican government in 1921 and became the embassy and the ambassador’s residence.

In 1930, renowned Mexican artist Diego Rivera, then director of the prestigious San Carlos Academy of Fine Arts in Mexico City, recommended that the academy send one of his contemporaries, Roberto Cueva del Rio, to the United States to display his work.

Three years later, Cueva del Rio began to paint a series of murals on the walls of the 16th Street mansion — a project that took nearly a decade to complete. Cueva del Rio’s striking murals capture significant chapters and heroes in Mexican history, eschewing political commentary to portray the diversity of Mexican culture, the dignity of ordinary men and women, the beauty of the countryside and the evolution of modern Mexico. Restoration work was completed in 2018 to make the murals even more vibrant and fresh.

Together, the murals that capture seminal events of Mesoamerican history, the exhibits that highlight the contemporary artistry of present-day Mexico, and the institute’s collaborations with U.S. museums, performers and artists all combine to paint a distinct picture of a complex, innovative nation.

Just as “Vested Values” recognizes the value that Mexico’s government places on the priceless contributions of the country’s artists, so too does the institute itself embody the importance of sharing Mexican creativity and culture, both past and present, with American audiences.

John Lennon is a former Voice of America program director who is retired and lives in Alexandria, Va.